Autumn is when seasonal cottage and rural water systems across Canada need to be drained for winter. Success is vital, and the reason is because of an unusual physical property. Water is one of the few liquids that expands as it freezes, and not even metal can contain the pressure without splitting.

There are three broad tasks involved in draining a seasonal water system:

Switch off power to your pump, open a tap to relieve all pressure, then remove the intake pipe from the lake, river or well that supplies water. It’s usually black plastic and about 2” (50mm) in diameter. Remove the coarse screen on the foot valve at the end of the intake line, then prop open the internal valve with a stick or screwdriver until water stops gushing out.

The top of every water pump includes a threaded plug, often with a square shaped head on top. Use a wrench to remove this plug (turn it counterclockwise) to allow air to enter the intake line as the water drains. If any part of your intake line rests on top of the ground, raise it up as you slowly walk from the pump down towards the foot valve. This action ensures complete drainage.

Now it’s time to drain the water pump itself. Somewhere on the bottom of the pump casing you’ll find a threaded plug. It probably looks quite a bit like the plug you removed from the top of the pump to let air enter the system. Remove this bottom plug after placing some kind of shallow pan underneath to catch the litre or so of water that will drain out.

Draining the taps, supply lines and drain traps of the rest of your water system is going to require observation and judgment. All water systems are unique and you may have to exercise ingenuity to ensure no trapped water remains. Open all faucets, shower taps, outdoor hose connections, etc to allow air to flow into the pipes as water drains out. Without allowing air in, water won’t drain completely.

While your supply pipes are draining, flush out all water in your toilet tanks, then use a large sponge to get rid of what’s left. Although you can’t completely drain the toilet bowl itself, use the sponge to sop up and remove as much water as possible. Add non-toxic, plumbing anti-freeze to the bowl to make sure that any remaining water does not freeze. If your water system is powered by a piston pump (they have visible drive belts), reinstall the bottom drain plug and fill the pumping chamber with more antifreeze to keep internal valves wet and supple. 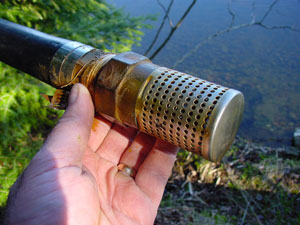 Open the drain valve leading from the bottom of your hot water tank and keep it open until water stops coming out.

If you’ve got a lever-style pressure relief valve on the top of the hot water tank, prop it open to allow air easier access into the tank as water drains.

Finish up by removing the plugs at the bottom of all drain traps to let water fall into a bucket. If some traps don’t have drain plugs, pour 1 1/2 cups of plumbing antifreeze into them for frost protection.

All this sounds more complicated on paper than it will after a season or two of successful draining. It’s a chore, yes, but necessary for anyone with a water system that’s not protected against frost. And at least you gain comfort knowing that this typically Canadian chore is one of the things that binds this country together.