Ordinary dryer vents and bathroom exhaust vents hardly ever work properly. The flimsy plastic internal flap door opens and closes in the wind, and most of these flaps eventually fall off in time. The only vent I’ve ever seen that’s designed to actually work effectively over the long haul is called EcoVent. It’s made by Broan, and every so often I get someone asking me about this product. Typical questions include:

“What’s your take on the EcoVent dryer vent? I understand the need for a vent that effectively keeps out cold air, but I’m concerned about the foam ball that acts as a valve inside this product. Won’t it wear out after a few years? Carpenter ants usually love foam. Won’t they tunnel into the vent? Is flammability of the foam an issue?” 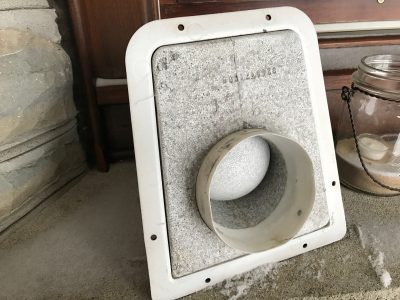 These are all great questions, and I can answer them with confidence because we’ve had more than one EcoVent installed here at my place since the early 2000s. Instead of relying on a plastic flap to keep cold air out (as I said, a widely used design that simply doesn’t work), a large foam ball drops down whenever the dryer or exhaust fan isn’t running, blocking the hole as it does. Our unit continues to seal out air as completely as necessary for our dryer and bathroom. We’ve never had any insect infestation, nor any trouble with fire. The only issue had to do with the plastic shroud that encases the foam components inside. Occasionally this shroud falls off, leaving the foam exposed. Dab a few blobs of construction adhesive on the foam before replacing the shroud and it stays in place permanently. This plastic shroud is white as it comes out of the box, but it takes Krylon spray paint perfectly. I painted both our EcoVents brown.

Are there any drawbacks? Not many, but there are a few. Although both our EcoVents have worked perfect most of the time, when it’s really cold outside the unit on our bathroom exhaust fan freezes shut with moisture. Sometimes it takes a few minutes of the fan being on before the floating internal ball breaks free. Also, earlier in 2016, I installed two more EcoVents at my son’s house. I think the internal foam ball on both might have been a little too big because in both vents the ball tends to stick shut or stick open – at least at first. The problem seems to have cleared itself up with a little use.