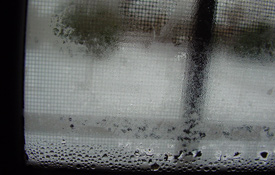 If you’ve got breathing issues that seem to get worse each winter, then you need to hear about a friend of mine named Christie. Your house may be making you sick, just like her’s was.

Christie lives with her son and daughter in a modest, 20 year-old bungalow just like many others in Canada. For the 7 years they’ve lived in the house they’ve all suffered from asthma, coughs, battled with regular consumption of antibiotics for a more-or-less constant stream of respiratory problems. But this winter their recurring ill health has completely disappeared, all because one button was pushed.

Like many modern homes, Christie’s place was built fairly tight, to keep out drafts and to lower energy costs. That’s good as far as it goes, but there’s a problem.

A tight house is invariably a stuffy house in winter unless steps are taken to bring fresh air inside. Without enough fresh air, toxins build up, indoor humidity levels rise, causing window condensation and, in Christie’s case, actual mold growth on the attic hatch, window frames and some exterior wall corners. 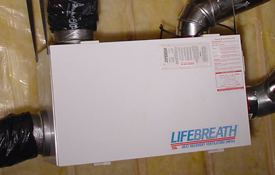 This past fall I visited Christie to do a small drywall repair for her, and even though cold weather hadn’t yet arrived, the place seemed like it needed fresh air. When I heard later about the annual reappearance of winter-onset asthma and coughs, I suggested Christie look into getting a heat recovery ventilator installed.  These are made by a handful of companies and all models do the same thing: bring in a constant flow of fresh outdoor air while exhausting the stale indoor air after extracting the heat from it.

“Venmar is one popular brand”, I said. “It would probably make you and your family much healthier if you put one in.”

“Venmar? There’s a little control box next to my thermostat that says Venmar”, said Christie. “What is it?”

For all these years Christie has been living with wintertime indoor air that was toxic enough to cause recurring health issues, and it didn’t have to be this way. She had an HRV all along, but didn’t know what it was or how to turn it on. Within a day of pushing the ON button, the air was fresh in Christie’s home, window condensation was gone, and her son has been completely free of asthma for the first winter of his life.

I often wonder how many Canadians get sick and suffer for want of a little knowledge and adequate ventilation. And while relief and health might not be as easy as pushing a mysterious button that’s already on your wall, we all need to get plenty of fresh air in winter, one way or another.