UPDATED 20Aug2019: I’m not sure how my conversation about the $250,000 mortgage came up, but it got me thinking about two very different ways that people live these days. There’s the “mortgage-now-pay later” approach that’s grown so popular over the last 50 years, then there’s the old-fashioned, pay-as-you-go “bootstraps” approach that I still have faith in. Let me explain why.

My mortgage conversation started when a friend told me about his daughter and son-in-law and the big new home they’d built. I remember the day I bumped into these two as they were walking into the bank a few years ago to get approval for their mortgage. I wasn’t sure if I should wish them luck or suggest they turn around and run. The ability to get into your own large, custom-built home without doing any more work upfront than signing some papers is an exciting and prestigious thing. But in the end, the mortgage lifestyle that makes it possible doesn’t come cheap. The price was a $250,000 debt that will end up costing nearly three quarters of a million after-tax dollars before it’s paid off – assuming the mortgage holders can hang on to their jobs for the next 30 years.

So what’s the alternative to a mortgage for people who don’t want to rent? Even in the credit-crazy world we live in, I still say the build-it-yourself, pay-as-you-go, live-with-less-for-a-while bootstraps approach is best. And not just because it costs less and offers more freedom.

Growing as you can afford to, and working for the things you want but don’t yet have, brings more joy and satisfaction in the end. I know this from my own experience building my homestead from scratch starting back in 1985. And my son, Robert, and his new wife Edyta, are showing me this truth all over again.

Robert was born in 1990, but when he was 18 he got the notion to build a cabin on a small corner of our homestead property. What better way for a young man to grow in competence and stamina than to take on a project like this? I was all for it. There’s nothing like struggle and sweat and accomplishment to turn a boy into a man, and that’s one of the things the cabin project has done for Robert.

Fast forward to September 2014, and my wife and I are watching Robert at the front of a church in Warsaw, Poland – ready to put a wedding ring on the finger of a young lady from that city who he met online a couple of years earlier. Robert and Edyta could have chosen any life they wanted for themselves, but they’ve chosen to live on our family homestead, building slowly as they can afford to, including modest expansion plans on that cabin Robert built, turning it into a small but beautiful full-time home. 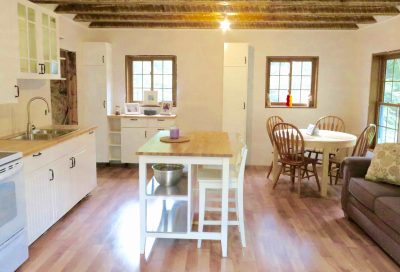 Before you start thinking how rurally romantic all this is, let me remind you that the reality of romance is often just plain hard work and deprivation – at least in part. That happened several times for them, including when expanded the original cabin amid the scramble of all our other homestead work. Robert and Edyta spent plenty of time sleeping on mattresses on a floor in a place with no bathroom nor running water. They didn’t have a kitchen of their own for a while, but cooked, ate and washed up with the rest of our extended family at the main homestead house. Six days a week it’s work from 8am to 6pm – sometimes evenings, too. When the expanded cabin was finally ready to move into, it was warm, bright, pretty, 800 square feet in size, and pretty-well paid for.

So if building a mortgage-free life for isn’t a picnic, what’s the benefit?  Why not just buy everything you want right away, funded by credit and live like normal people?

Besides the fact that bootstrap living means you pay a lot less money for things in the end, there are other benefits delivered by this out-of-fashion lifestyle. Big benefits. Bootstrap living forces you to become more innovative and competent, doing more for yourself directly and gaining skills as a result. Robert can frame a wall, shingle a roof, climb a ladder, set up scaffolding, negotiate his way around a lumberyard, wire a circuit, design simple structures and keep a building site clean. He’d know none of these things if his name were on a mortgage right now.

Having grown up in the city of Warsaw, Edyta never stacked firewood, climbed ladders with paint brush in hand or operated power tools. As it turns out she has a remarkable aptitude for all these things and she’s getting better all the time. Working on their tiny home has made them bigger people, but it’s also delivered joy that money can’t buy. There really is something deeply energizing about working for yourself on projects of your own, where the fruits of your labor come in direct proportion to how well you perform.

Robert’s original cabin had no electricity, and it required a lot of extra work to get the whole place wired and energized. This meant electric light was a real novelty and a hard-won feature of the expanded place, and we all find ourselves happily turning the lights ON and OFF, just for the thrill of it. Perhaps I’m easily amused, but I still call it a good thing when an investment of sweat equity results in the ability to enjoy so many little things that often go unnoticed when we just buy them ready-to-use.

I’m hopeful as I see the tiny home movement taking off, and requests for construction plans and instructions for building Robert and Edyta’s cabin have come in to me often enough from my readers that I put together a video construction course. People are now building this cabin across North America and even on the other side of the world.

The mortgage-free bootstraps lifestyle isn’t for everyone, and Robert and Edyta have the right situation to make it happen. Not everyone does, I know. They’re also patient, easy to get along with in an extended family situation, and willing to submit to wisdom they might not recognize immediately on their own. Their plans would never happen without these qualities. All this said, is it too much for me to hope that more people might bootstrap themselves into a home and life by building or renovating a small place of their own, borrowing as little as possible or nothing at all while using hands and hearts and sweat to make a place their own? Can’t a few more people side-step $250,000 mortgages, replacing them with old-fashioned gumption and the deep satisfaction it delivers? I hope so.  Click to learn more about building a tiny home and the video course that people are using around the world to make it happen. As far as I know, it’s the most complete tiny home building course and blueprints anywhere in the world.