Sooner or later every deck, shed, fence and outdoor wood surface gets moldy or weathered in time. Even non-wood surfaces such as composite decks, plastic lumber and vinyl siding start to grow things as the forces of nature have their way. Entire law suits have even been launched over the growth of mold and fungus on outdoor building materials. For years, chlorine bleach as been the go-to option for removing stains like these, but in some ways this is a case of the medicine being worse than the disease. Bleach can be effective, but it can also be caustic, toxic and harsh, especially around plants.  Washing your deck with a bleach solution is a great way to ruin a garden and kill all the worms at the same time. Solving this problem is the thinking behind a powerful family of emerging stain removers that don’t use chlorine at all. 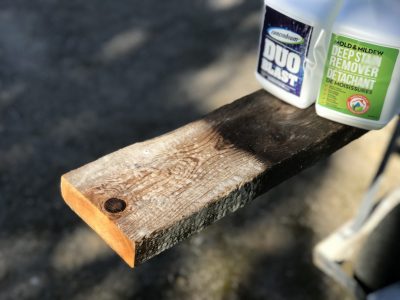 Ten years ago the first wave of oxygen-based stain removers caught my eye. They all claimed to do more than chlorine, with none of the harmful side effects. Did that first wave of products deliver? During my time testing them, I discovered there are two types: single-part and two-part. As usual in life, the less convenient option of mixing a two-part product is the price you pay for greater effectiveness. This is still true today. The very best oxygen-based stain remover I discovered in my initial testing is a Canadian product called Mold Stain Eraser. It comes as a powder that you dissolve into warm water, then slosh onto stained surfaces. The solution works over a two hour period, after which time the active ingredient breaks down into nothing more than water and oxygen. During my tests, this product did things I didn’t think were possible. It even transformed weathered, grey lumber into bright, new looking wood, without removing wood grain details. That’s it in action on a weathered 2×6 I used for my initial tests. Oxygen-based products like this also work well removing the kind of black fungus spots that triggered legal action against composite deck lumber manufacturers a while back. Results like these are surprising, and something chlorine bleach could never do with the same ease and safety. Until now, mixing and dissolving a powder was the only drawback with the best two-part oxygen products I’ve used,  but that’s not necessary any more. 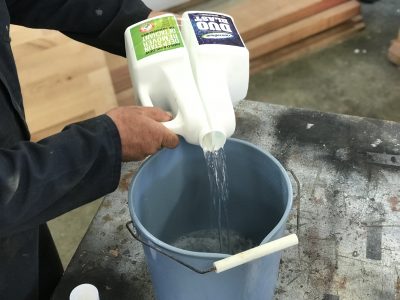 Duo Blast is a dual-liquid version of the two-part, oxygen-based cleaning chemistry that’s taking over from chlorine. It even seems a little more effective than its powder-based predecessor in my standardized tests. Like Mold Stain Eraser, Duo Blast has a very mild odour (the faintest smell of vinegar), and a two-hour working life. Hold the two-part jug with the label facing upwards, tip it up to dispense equal parts of both liquids into a plastic pail, swirl the liquid to mix, then apply. A weed sprayer is the best way to put it on larger areas.

Nothing much happens immediately, but give it time. The solution foams a bit, then slowly removes stains without diminishing natural colours. I find the best results happen on cloudy days or under shade and can take several hours. The label claims “scrub-free” results, but sometimes a little scrubbing is necessary for best effect. I found this applies mostly to those black mold “leopard spots” that develop on composite deck material.

The Duo Blast I tested comes in jugs, but I hear it’ll also be available as a ready-to-use spray trigger bottle. The spray mechanism draws from both sides of a two-part reservoir, saving you the trouble of mixing for small jobs. Just spritz it on as needed. There’s no need to wash it off, and it’s safe to use around lakes, pools and kids.

Slowly but surely, our world is getting safer and less toxic. Exchanging oxygen compounds for chlorine chemistry seems like one of the best small things to happen to the world of cleaning in a while. Duo Blast is new enough that it’s not yet listed online, but I understand it’s on the shelf at Home Depot, with wider distribution coming.

Click the video below to watch an oxygen-based stain remover in action.