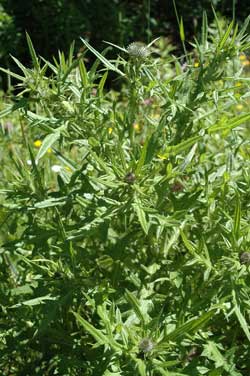 Environmental decline has grieved me ever since I was seven years old, and part of this includes a paralyzing sense that nothing’s ever going to get better. And while looking in the short and medium term usually confirms this notion, even in my most pessimistic moods I have to admit that taking a longer view shows a rosier trend. This is especially true when it comes to attitudes around lawn care. I’m especially impressed with two new products that are both effective and environmentally sound.

Like every kid of the Canadian suburbs in the 1970s, I grew up with the slightly sinister aroma of the herbicide 2-4D wafting through my neighbourhood each spring as homeowners sprayed their way towards the much-coveted grass-only lawn. Nurseries regularly smelled like chemical dumps as bags of poisonous weed-and-feed products stood ready to spread the monoculture ideal of beauty on lawns and parks. My dad often sprayed a nasty-smelling white liquid all over a chronically-sick birch tree in our yard, while municipalities maintained grass-only landscapes along roads and parks by wielding a toxin-heavy hand.

But fast-forward a couple of decades and today’s lawn care realities make it seem that a bunch of organic hippies have taken control of the country. Traditional herbicides are banned from many communities. Municipalities now let dandelions proliferate, and ordinary people are concerned about their environmental footprint and willing to change lifestyles accordingly. All of this is very good indeed, and with it has come a particularly astonishing herbicide called Weed B Gon. It’s safe enough that it’s permitted in municipalities with herbicide bans, and I know from testing that it also works faster than even the nastiest traditional weed killers I’ve seen. As far as I know Weed B Gon is unique. 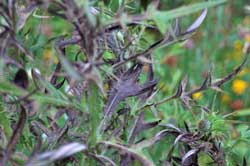 The product uses iron to selectively kill broadleaf plants, leaving grass unaffected. Even though I’m happy to have 50% of my lawn covered in dandelions and clover (in true organic hippie fashion), I draw the line with thistles. They’ve got to go because they hurt so much to step on. Their long tap root also makes them difficult to kill with a shovel, especially if you’ve got a lot of thistles to deal with. Up until now, the safest herbicide for killing thistles was Round-Up, but it takes a week or two to work and kills surrounding grass, too. Weed B Gon kills even fully-established thistles and other tough weeds in three or four days while leaving grass green and lively. The main thing to remember is that you’ve got to soak the plant. A few squirts won’t do.

Weed control isn’t the only part of lawn care that impacts the environment. Nutrients and soil fertility do, too. That’s why the Grass Roots soil testing kit caught my eye. It’s a homeowner-friendly way to assess soil nutrient levels so fertilizer can be applied intelligently, in just the quantities required. The kit costs $20 from Home Hardware or online at A Growing Necessity and includes sampling instructions, a soil bag and a prepaid shipping box.

Taking a representative soil sample from my yard took about ten minutes with a shovel, and the completed test report arrived by email about a week after I dropped the kit into the post. Results covered the most important soil parameters:

As it turns out, my soil’s in pretty good shape. All it needs is a little additional potassium. Without test results to go by, however, I would have been managing my soil blind, unnecessarily applying broad-spectrum fertilizer when most of the nutrients weren’t needed at all. Fertilizing properly is not just about saving money, but more importantly about reducing the environmental impact of manufacturing fertilizer and the resulting nutrient run-off.

It’s taken more than thirty years, but I’ve got to admit that there are significant environmental bright spots, at least as far as attitudes towards lawn care goes. Now if we could only figure out how to live without oil…we’ll have to soon enough.