At any given time on our homestead here on Manitoulin Island, there are lots of things going on: building, gardening, home improvements, managing livestock and the various challenges of raising a bunch of kids in the country at the end of Bailey Line Road. So this is the first of a daily peek into what real life is like here. I hope you find it worth coming back for.

We’ve had an exceptionally mild and pleasant fall this year, and our good fortune continues. This morning is stunning. There’s something especially thrilling about fall because it offers something that other seasons don’t, no matter how nice they are. The deepest attraction of fall is all about the bitter-sweet prospect of the warmth and light and easy living of summer coming to an end with winter. And this morning the bitter-sweet was especially thick. It’s certainly true that the more you know a good thing is coming to an end, the more deeply you appreciate it. 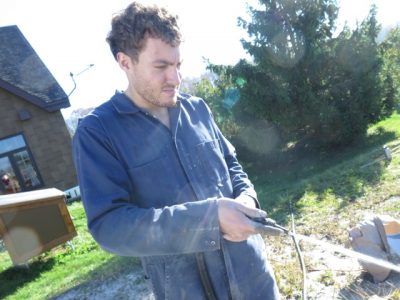 Our oldest son, Robert, is uneasy these days. He and his new wife, Edyta, have been living with us while they work on their small home about 500 yards away from the main house. He’s making great progress on the laundry room and bathroom he’s adding to the main structure he built a while back, but there’s worry, too. They’ve got their heart set on moving in before winter, but it’s not certain the septic system will get built in time. Our installer – a great guy named Ron – has had equipment troubles. A while back he was working with his loader in a sand pit and one entire front wheel assembly fell off. He’s been working as hard as he can to get his machine fixed. The final parts were supposed to arrive yesterday . . . The weather is holding out, but the days are moving along, too. 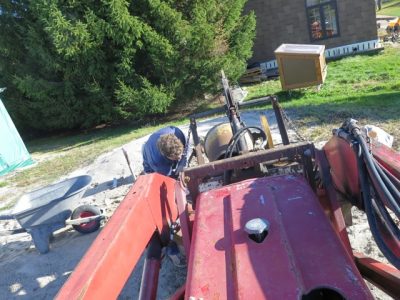 Yesterday we took matter into our own hands and prepared a place for the septic tank as best we could using our old tractor. It’s actually the second tractor we’ve got – an International H84 from the 1970s – and this one has an old loader. It’s a real step up from the 1953 Farmall Super H we’ve had since 1988, but it was all we could do to scrape down to the limestone bedrock to create a base for the tank with the H84. Old, two-wheel drive tractors are far from the greatest thing for moving earth . . .

The whole septic system project has been touch and go, because the cabin site has just barely enough slope for sewage to flow. The bedrock is right below the surface, but we found one spot where the tank could go – just barely enough downhill from the cabin to work. Yesterday we discovered that the bedrock there is dished, so the tank is only supported at each end – not in the middle. This won’t do since the weight of the sewage would break the tank. It needs to be supported along its full length. As I write this Robert is mixing concrete into the bucket of the tractor. Our cement mixer and gravel are here at the house, and we’ll drive the concrete down to the septic tank and stuff as much as we can under the tank with rakes and hoes. That should work. 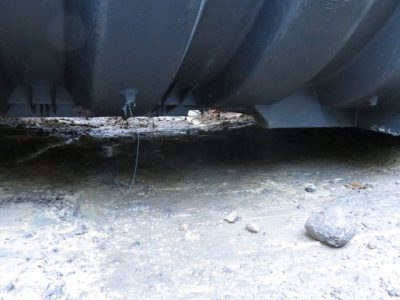 One of our other sons, Joseph, holds the Canadian record for shot put and he’s been dreaming about going to a US university on scholarship next year. That dream hit turbulence last week with news from one university. Joe’s dreams have collided with a wall, and he tells me this is the hardest time of his life. More on that tomorrow from Bailey Line Road.