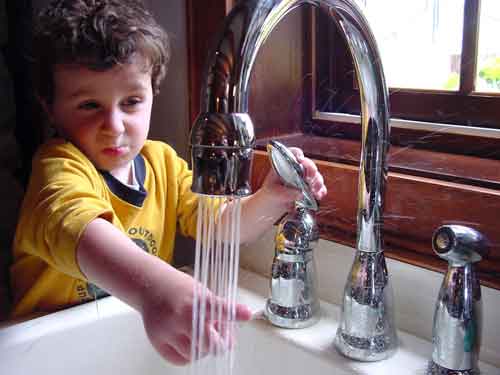 A house without enough water is like a car without gas. Nice to have, but not much practical good. If your well runs dry whenever you tackle a couple of loads of washing in a row, or have a few extra house guests showering in the morning, or you need to water some garden plants during a drought, there’s good news. You may not have to live with a water shortage any more.

In fact, you can probably get all the water you could possibly want from the very same well that’s been letting you down for years. Even particularly wimpy wells delivering a measly one gallon of water per minute can amply supply an ordinary household when coupled with the right set up. The key is something called the “trickle system” — several pieces of simple hardware that work together to make the most of the water well you’ve got.

Before you decide all this is too good to be true, you need to understand something fundamental. While it’s a fact that your weak well may not be able to keep up with the flow rate demanded during periods of medium or heavy water use, most of the time your well is just sitting there doing nothing. Think about it. What portion of each day is a tap actually running? How often are you asking your well to deliver water? Even a busy household only demands water for a relatively short period of time each day. The key to the trickle system is that it draws and stores water from your well slowly over the entire course of a day and night, even when no tap is actually turned on. Then, when you want a lot of water fast, there it is.

Instead of a pump delivering water directly to a pressure tank that supplies your house, the trickle system has two pumps, each part of the two different sides of the system. The first side draws water from your well whenever it’s available around the clock. This water is stored in an enclosed holding tank (typically about 300 gallons for an average household), either buried in the ground or tucked away in some corner of your basement.

The second side of the system includes another pump that draws water from the storage tank and feeds it into a traditional pressure system that supplies water to all your taps and fixtures. This second pump switches ON and OFF automatically in the usual way as household pressure rises and falls during normal household water usage. Since this second pump draws water from a large available volume in the storage tank, it’s quite capable of supplying heavy peak loads without running dry. While all this is happening and afterwards, the primary side of the system keeps drawing water from your weak well as it’s available, replenishing the storage tank. And make no mistake, the seemingly limited supply of a disappointing well can actually add up to quite a bit of water. Even if your well can only deliver a miniscule 1/2 gallon per minute (practically a dry hole) this rate adds up to a whopping 720 gallons a day — more than enough to supply even the most water-hungry household on wash day.

Turning all this theory into practice in your home depends on specific pieces of hardware connected together in a certain way. Whether you hire a professional to install the necessary equipment, or do the work yourself, it pays to understand exactly which parts are needed and how they work together. And one of the most important components is installed as part of the primary side of the system — the side that draws water from the well.

Almost every weak well already has a pump drawing water from it (or trying to), and you can use this as part of the trickle system. The key is a small piece of electronics that senses when the pump runs dry and shuts off the power instantly, for a preset period of time before automatically turning the pump back on again. Tailor the length of the shutoff period to suit the recovery rate of your well. Have it adjusted to switch back on only after a decent amount of water has flowed back into the well. 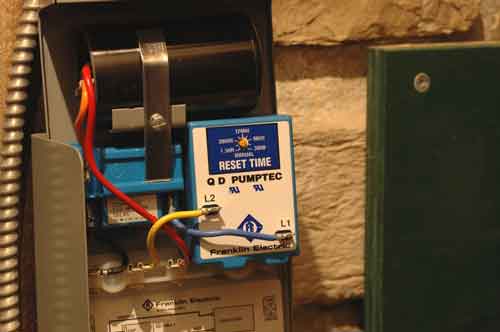 Depending on whether your primary pump is a jet pump or submersible, you’ll find different switching systems to make this auto-shutoff happen. If you’ve got your choice, the most reliable system uses a submersible pump with a Pumptec submersible pump protection device installed in the control box. This is what I use at my place. There are two reasons why this combination is so effective.

The nice thing about every submersible pump is that they can never lose their prime. That’s because the pump actually sits down in the bottom of the well. If there’s water in the well at all, a submersible is always ready to push it upwards into your house. A jet pump, on the other hand, is very susceptible to air pockets because it’s located above ground. If you’re using a jet pump on the intake side of your trickle system, and it happens to suck in a little air before shutting down as your well runs dry, then the pump won’t be able to draw water no matter how much has flowed into the well. You’ll have to top up the system manually before the jet pump can pump again. That’s a huge and unnecessary pain and it defeats the whole purpose of the system.

Another reason submersibles are perfect for the trickle system is that the Pumptec control device is designed to work with them. It senses changes in electrical current draw that happens when the submersible pump runs dry, then immediately shuts off power to the pump before damage can occur. You can dial in a preset amount of time that’ll elapse before the pump is re-energized, depending on how fast your well refills. The Pumptec unit can be adjusted for a delay of anywhere from 3 to 90 minutes. There are other devices that work for this application too, but I know from personal experience that the Pumptec is reliable.

The secondary side of a trickle system requires a food-safe holding tank, a pump and pressure system to deliver water to your taps and fixtures, and a float switch to cut power to the well pump when the holding tank is full. Since the pressure pump is drawing water from a tank that’s very close by (maybe even with a water level that’s higher than the pump itself), it’s in no danger of losing it’s prime. Go ahead and use any kind of pump that’s handy for you. In fact, if you’ve already got a jet pump on your weak well now, move it over to the secondary side of your trickle system (the part that delivers water to your taps from the storage tank), then put a new submersible in the well.

Empowering a weak well to supply serious water isn’t complicated or difficult. All you need is a little know-how and a little equipment to make the taps flow like they never have before. I’m thinking that the whole topic of building a system to get lots of water from a weak well would make a good video ebook. It would include all the details needed to build a system yourself, including specific hardware and where to get it. If this is a topic you’d be willing to pay $20 or $30 to learn about, let me know. If I get enough requests I’ll create a course on it.

It’s one thing to have enough water at your house, but if that water smells like rotten eggs, what’s the point? This condition is called sulphur water, and it’s quite a widespread plague in some areas of the world. Since the odour-causing sulphur can’t be removed by ordinary filtration, many people mistakenly assumed there’s no solution. That’s simply not true.

The fact is, there is a safe, effective, inexpensive option for removing the odour of sulphur water, and it involves the use of oxygen delivered in the form of food-grade hydrogen peroxide (H2O2). Before you wince while you think of hair bleach in your drinking water, understand that hydrogen peroxide is nothing more than an ordinary water molecule with an extra oxygen atom tacked on. Whenever H2O2 comes in contact with other substances, it releases this separate oxygen atom in solution, creating a highly oxidizing condition that offers a number of valuable effects. One of these has to do with sulphur.

Each single oxygen atom binds with odour-causing sulphur compounds, causing it to change form and precipitate out as a fine solid. This new sulphur compound can then be easily filtered out by running water through a softener or carbon filter.

Injection pumps are available to add H2O2 to household water at any stage of the pumping process. Cost of the H2O2 amounts to less than $200 year for most households. If you’re using a trickle system, it makes most sense to treat the water on the primary side initially, as it comes into the storage tank. Hydrogen peroxide also kills microbes, keeping the water fresher while it sits in the tank. A water softener or whole-house carbon filter as part of the secondary side of the system offers a final level of treatment before water is delivered to your taps.