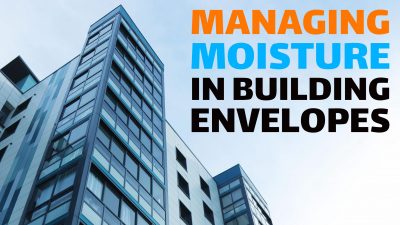 In the late ‘80s and early ‘90s, there was a housing boom in Vancouver, Canada that had developers scrambling to build as many condos as they could. Many of these condos were made in a style similar to what had been built in California. The climate of Vancouver, however, is not anything like California. That’s why water began leaking into these new condos, causing billions of dollars in damage to the city economy. This period was known as the leaky condo crisis. The culprit? According to the Canadian Mortgage and Housing Corporation, badly built building envelopes.

What Is a Building Envelope?

The Importance of Moisture Management

Building envelopes have several important functions, but one of the most important is moisture management. Moisture can have serious negative impacts both on the health of the building and its inhabitants. When moisture is allowed to seep into the envelope, it will begin to rot wood and rust metal. This erodes the barrier between the outside and inside of the building, reducing the efficiency of insulation. Moisture will also promote the growth of mould, which can drastically reduce the air quality in your home and cause severe illnesses.

One of the main causes of the Vancouver debacle was the use of “cool looking” exterior stucco walls. While this might work well in sunny California, it takes a tremendous amount of diligence to make exterior stucco reliably waterproof in a super-wet place like Vancouver. Widespread failure of building envelopes in that city proved that architects, builders and building inspectors were not up to the challenge of making water-tight stucco that stayed water tight. It’s astonishing that all these professionals failed in their responsibilities, but it happened.

You might wonder at the title of this section. All water is liquid, after all, right? When it’s a gas or a solid, we call it by a different name. “Liquid water” is being used here to describe rainfall and snowfall. Other sources of water from condensation will be addressed in the next section.

Building envelopes being penetrated by liquid water was one of the causes of the leaky condo crisis. This was due, in part, to ordinance changes surrounding roofs in Vancouver. Roofs became a part of a building’s floor space ratio which caused developers to remove overhangs to maximize actual, usable floor area. The design of the roof is an essential element of managing liquid water; one of a roof’s primary functions is, after all, to stop rainfall from entering your home. When considering moisture control in a building envelope, the roof’s pitch and whether or not it has overhangs are essential. Without overhangs, water often drains towards the walls, compromising the envelope’s integrity. Roof overhangs really matter.

Landscaping is another essential element of liquid water management. You want your land to be slanted away from your home so water doesn’t begin to seep into the foundation. That said, almost all water should be absorbed by your soil or you’ll need to install systems to deal with run-off. Avoid having too many impermeable surfaces as part of your landscaping.

There are times where no amount of landscaping and roofing will save you from liquid water problems. Plumbing issues, sewer backups, torrential rains – these things can all cause water problems, sometimes including penetration of the building envelope. Install a drainage system to help prevent basement flooding, including a sump pump and backwater valve.

The techniques used for managing condensation are quite different than those used for liquid water control. To understand condensation management, it’s useful to understand the mechanisms by which condensation occurs. In short, air has water in it, but the cooler the air is, the less water it can contain. When warm, humid air touches a cold surface or begins to cool down because of its surroundings, the moisture in that air turns to water on the surface. This is condensation.

When areas of your building envelope are colder than the outside air, condensation can begin to cause moisture problems, typically from the inside out. The best way of resolving this issue is to make sure warm, moist, indoor air cannot make it’s way into wall cavities. Insulation is one thing, but most types of insulation can’t stop the movement of indoor air into building envelopes. For this you need something called a “vapour barrier” or “vapour retarder”. Most commonly this is clear plastic installed in a continuous way on the warm side of the insulation in walls and ceilings. The only kind of insulation that can function properly without an additional vapour barrier is closed-cell foam – either spray or sheet versions.

To learn more about how vapour barriers work, click below to watch a video tutorial.

An important consideration is that you need insulation everywhere in order to create a proper thermal barrier and reduce condensation. Traditionally,  and air sealing people think of insulating their attics, but walls and foundation must also have a level of insulation. For many basements, this poses an interesting challenge. Concrete is porous, and so unfinished concrete floors are more likely to allow moisture to seep inside and cause damage. What’s more, concrete tends to get colder than some other flooring options, like carpet. Proper moisture control for concrete flooring is essential to ensure the overall integrity of your building envelope.

The Role of Ventilation

A highly insulated, properly sealed building envelope is thus essential to moisture control, but problems occur when that sealing becomes too thorough. Without sufficient natural ventilation (aka “drafts”) indoor humidity can rise to the point where it triggers condensation. Few people know this, but air conditioning was originally developed as a method of dehumidification, and it can act in this role in your home. AC is actually the most effective method of reducing indoor humidity levels during summer.

In wintertime the situation is different. Whenever it’s colder outside than inside, a heat recovery ventilator (HRV) is the most effective way to reduce indoor humidity during cold weather. An HRV allows stale air to leave your home while fresh air is drawn in, all while retaining most of the heat energy indoors.  Energy recovery ventilators (ERV) are similar except that the moisture remains with the air that’s carrying it. ERVs make the most sense in climates primarily requiring cooling, and an HRV is better for heating climates.