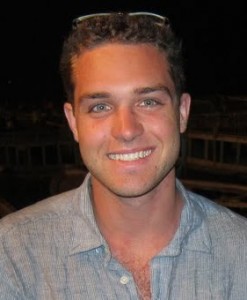 A little while ago I got an email from a 24-year-old man in South Africa. That’s him to the right. His name is Daniel and he had questions of the kind I hear more and more often these days. Daniel has a good job, he’s on track for the usual sort of successful, modern, urban life that we’re all supposed to want, but his heart just isn’t in it. Instead he’s wondering about living more deliberately, building his own home in the country, growing some of his own food, and creating a self-directed rural life for himself.  I call this “modern homesteading” and my previous posts on the topic prompted Daniel to reach out to me with questions. Modern homesteading is exactly what I set out to do when I was 24, so I know exactly what drives Daniel to leave the beaten path. What you’ll find here is the first of three parts of the Q&A email exchange Daniel and I had. Read on to see our full conversation.

A Little About Daniel

Daniel:  I’m live in Cape Town, South Africa. I’m in my first year out of university, working as a mechanical engineer. I have a love for being outdoors and I want to lead a simpler life one day on a farm/homestead. I routinely spend time on friends’ farms and love helping with the animals and odd jobs (fencing, harvests, repairs, milking, etc.). I also attended a course last year on how to build log cabins as I would love to build my own house/cabin one day.

Steve: You are almost exactly where I was at your age. I was first setting out on my homestead adventure when you were a year or two old, and the interests you express are identical to what I felt and still feel. Phrases like “simpler life”, “love helping with the animals”, “fencing, harvests, repairs” – these are all things that make me smile. God puts different things in different hearts, and I have the heart of a peasant. It sounds like you do, too.

Daniel: Your particular post that I found first was ‘Homesteading Test’ where you describe how you felt when you first arrived on your land. That really resonated with me as it’s been a big fear of mine and it’s the first time I’ve found someone who openly speaks about it on their blog.

Steve: Modern homesteading is a challenge on lots of levels, but it’s the kind of challenge I love.  An analogy I use with my kids has to do with fish. A fish can live in a fishbowl with limited freedoms and regular sprinkling of fish food by their owner, or a fish can live in the open ocean. Nothing is certain out at sea, and no one is going to feed you. You thrive or die based on your wits, and the more skillful you are, the better you do. Some people are quite happy with a life in the fish bowl, but I’m not one of them. And the same homesteading urges you feel in yourself are what drove me to jump out of the fish bowl when I was your age, living by my wits in the open ocean. This, to me, is one of the places where the satisfaction of homesteading comes from. The other place is being around beauty all the time, and having a close-knit family life.

Daniel: Even though I have only been working for 6 months, I have considered resigning next year and going to USA to work on a farm (or as a hunting guide in the mountains somewhere) to gain more experience with the outdoors and to get a feel for what the land is like there. I would also love to be able to find a ranch/farm in Canada to do the same so I can explore that area too.

Steve: This is where my advice will start to differ from your current plans. If you’d like to homestead, then you really need to get a homestead going. So I wouldn’t go and work on a farm or act as a hunting guide because these things aren’t really homesteading. Yes, they’re all outdoor activities, but there are still big differences with regular farming and homesteading.