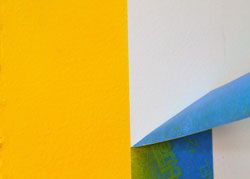 If you’re gearing up to do some interior painting this winter, you might reasonably think that masking tape can help you. The name certainly suggests it. What else would you use when you want to create a crisp dividing line where newly-painted zones meet stained wood or walls painted a different colour? Trouble is ordinary masking tape is dangerous. Despite its name, it does an amazingly poor job of actually masking paint, and unless you know ahead of time, this fact can cause you a lot of avoidable grief on two counts.

The first problem is that ordinary masking tape doesn’t actually keep paint away from adjoining surfaces very well. The characteristic crinkles you see on the surface of the tape lets enough paint creep underneath edges and onto adjacent surfaces to cause obvious problems when you peel it off. A masked line has got to be crisp or it’s no good at all. But as ugly as paint creep is, it isn’t even the worst thing that ordinary masking tape can do to you. Overzealous adhesive is another hazard.

While no one would ever consider masking tape to be particularly sticky as it comes off the roll, the adhesive involved is tricky. Leave that seemingly mild-mannered tape stuck on surfaces for more than a few days, and it settles in like an incompetent university professor making full use of tenure status. Try and peel it off and it tears into pieces, leaving gunk behind. The adhesive simply doesn’t let go. If you’re lucky, you’ll only have to contend with residual adhesive and ugly bits of paper left on walls. And while this is infuriatingly difficult to remove (as I know from experience), things can get worse. Masking tape left too long can also damage drywall by peeling off the surface layer of paper, along with the tape. If you ever do find yourself with residue from old-style masking tape to remove from walls, something called Goo Gone works better than anything else I’ve tried. It’s a citrus-based solvent that normally works quickly, though when it comes to masking tape residue prepare to spend a lot of time rubbing with a rag.

It amazes me how long bad masking tape has been the only game in town, but I’m thankful that tape manufacturers have noticed the deficiency and taken action. A particularly good example is something called ScotchBlue Painter’s Tape. It’s made by 3M, and notice how the company has distanced the product from that old “masking tape” name. That’s a wise move because my tests show that ScotchBlue eliminates all traditional masking tape problems in an admirable way, and the adhesive formulation is one reason why.

This past September, a new version of ScotchBlue with something called Edge-Lock hit store shelves. In tests I’ve conducted it keeps paint out perfectly cleanly as long as the edges are firmly pressed down during application. I found the back of my fingernail worked well to seal tape edges. Another plus is that Edge-Lock leaves no residue behind. In fact, the tape is rated to peel cleanly as long as two weeks after application. I suspect it could go even longer depending on the surface you’re dealing with.

Another version of ScotchBlue is designed for delicate surfaces. It’s officially rated for residue-free removal up to an unheard of 60 days after application. This is particularly good for do-it-yourself painting jobs where completion times can drag on since you can only work on weekends and evenings.

The performance of ScotchBlue is what you’d think ordinary masking tapes should do but don’t, and to really see how it performs compared to conventional masking tapes, I gave a box of ScotchBlue to the pickiest professional painter I know. Her name is Donna, she does great work and she has little tolerance for painting supplies that don’t contribute to her reputation of delivering high-quality results. “I really like this stuff,” she explained to me after using the Edge-Lock version of ScotchBlue on several clients’ homes. “It even worked well on bricks that I had to paint next to. It left a nice smooth line and removal was easy.”

Masking tape that’s actually meant for masking purposes does cost more than ordinary masking tape, so don’t cheap out. The real stuff costs about twice as much as bargain-basement “masking tapes”, but there’s really no comparison. What price can you put on avoiding jagged paint lines, damaged walls and a whole lot of time spent with a rag and bottle of Goo Gone?