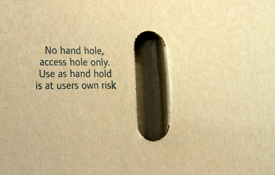 The 15-word warning next to a hand hole in a cardboard water pipe carton I came across a while back should make us all worried for the state of Canada:

“No hand hole, access hole only. Use as hand hold is at users own risk.”

When liability-absolving warnings about cardboard hand hole hazards make it to the real world, we’re in trouble on at least two counts. I’m also worried on a third. First, these holes were obviously made to make it easy to grab the lightweight, bulky 20 lbs carton and pick it up.  Nobody is fooled.  This is definitely a hand hole. Second, the notion that these oval, hand-shaped holes could be used to “access” a stiff, coiled, strap-bound coil of PEX water pipe is insane. The diameter of the pipe is bigger than the width of the hand hole itself. Short of looking inside to see if the pipe is actually there, what’s the point of “access”?

All these things are just silly, and they wouldn’t be worth mentioning if that’s where it stopped. The real problem is what hand hole warnings on cardboard shipping cartons say about Canadian society. In a world where companies need to protect themselves against hand hole lawsuits is a world where an unelected, unaccountable legal system has gone way too far in its quest to profit from absurd and debilitating litigation. This kind of dangerous nonsense is definitely not just an American thing, either.  As the idea of personal responsibility is abolished in favour of the potential victimhood of everyone, Canada is left with more red tape, more legal hassles and less productivity.

According to the Conference Board of Canada, the productivity of Canadian workers already lags our American counterparts by 30%. If we’d kept pace with America every person in Canada would have an additional $7000 to spend each year. Part of the reason we’re falling behind is because the idea of personal responsibility is an endangered species.

A Canadian ladder manufacturer I know spends more on liability insurance than they do buying raw aluminum and making it into ladders. I own a folding stool with a warning stamped into the step. It says “Danger Do Not Step”. What kind of silliness and expensive legal experience is behind these sort of thing?

The overall character of a country is nothing more than the sum total of the attitudes and activities of the people who live there. Is it too late to take our own individual stand that someone who drops a 20 lbs carton on their foot because of hand hole failure needs to dry their own tears without legal compensation? Isn’t it about time that people who step on the rung of a ladder shouldn’t expect anyone else to pay them if they fall off? Canada could not have been built if the idea of personal responsibility hadn’t been alive and well, and the good place that Canada is today can’t continue in its absence. Why are we Canadians taking this kind of thing lying down?