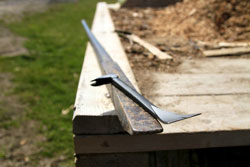 Tools for prying things have slowly become much better since the time when the old cane-shaped iron crowbar was the only option around. But because this evolution has happened without much fanfare, too few people know about the big differences that the right pry bar can make. Pry bar design can be a make-or-break issue when removing trim, salvaging lumber, or wrestling sometimes-warped new wood into alignment for that deck or garden shed project. That’s why I want to show you some of my favourite models and explain why I use them again and again.

It used to be that you could only buy great pry bars from specialty suppliers. That’s not true any more, and the Stanley models I’ve been sampling are a case in point. Though all these designs match the shape of specialty bars I bought from obscure suppliers over the last 20 years, they’re now mainstream. You can find them anywhere that sells Stanley, which is just about everywhere.

If I had to choose one pry bar to go beyond the usual sort of crowbar, the small, thin-bladed cat’s paw pry bar would be it. Also called a moulding bar, or restorer’s bar, this tool delivers precision at both ends. Available in 8”, 10” and 12” lengths, the cat’s paw gets its name from the delicate foot-shape at one end. This is mainly designed for pulling small finishing nails, but is also useful as a tiny driving hammer. I use the other end of the cat’s paw most often; it’s wafer thin, and ideal for sneaking in behind moulding and trim and levering off wood with minimal damage. Use a small hammer to drive the thin tip of the tool into position, then place a putty knife behind the pivot point to protect walls and neighbouring wood surfaces as you apply lever action.

My next favourite bar competes directly with crowbars of old, but it does a better job in most situations. Made of flat lengths of hardened steel, there’s a flat, wide tip at one end, and a tightly curved section at the other, leading to another flat tip. Stanley calls their version a Wonder Bar, while other companies have different names for the same design. Regardless of who makes them, the main advantage is the width of the tip. It distributes prying pressure over a wider span than traditional bars, delivering more levering action and less crushed wood.

Construction-grade lumber is milled from some of the strongest softwoods around, but it can also be some of the orneriest, especially narrower boards like 2x4s and 2x6s. Spruce is the main reason why. Any given piece of construction lumber can be milled from spruce or some species of pine or fir; all these woods can bend, warp and twist a lot as they dry. This is why some of the boards you bought for your new deck are far from straight. And matters only get worse as that lumber spends more time in the sun. Part of the skill of building is knowing how and where to work around wonky lumber, saving the well behaved boards for places where nice straight floor joists, beams or deck boards matter. But eventually, inevitably, you’re going to have to roll up your sleeves and wrestle uncooperative lumber into straight submission. This is almost impossible to do well with hands only, but surprisingly easy with the right prying and levering tools. 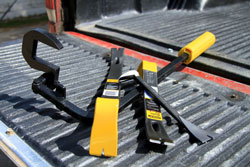 The intricate bar with the U-shaped feature on the left is Stanley’s version of a lumber prying bar. I’ve used every kind of similar model on the market so far, and this particular one is the most versatile. The U-shaped part straddles and grips 1 1/2”-thick joists, allowing you to use the lever arm to pry and press against bent boards, making them straight before locking the wood down with nails or screws.

Most people in our part of the world can get by without owning a pry bar, but only because other people own and use pry bars for them, either behind the scenes or as part of paid renovations. But if you’re the kind of hands-on person who likes to take charge of some of your practical needs directly, then you’ll probably be surprised how much mileage you’ll get from a few, inexpensive pieces of well designed steel that multiples the power of your muscles.