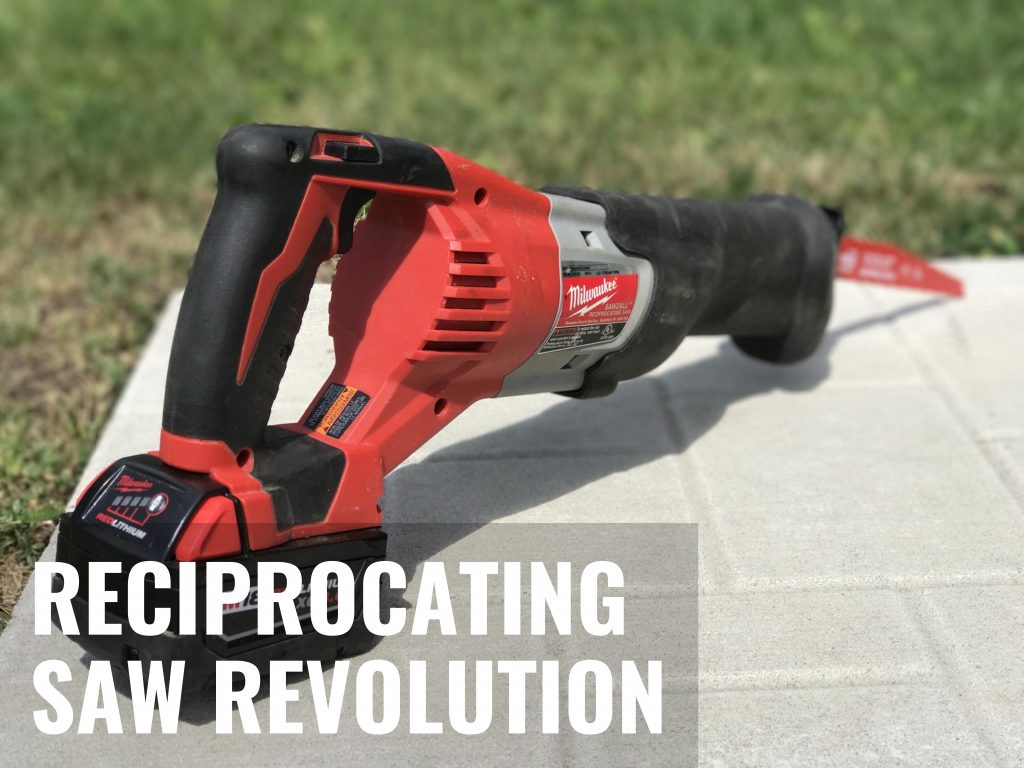 Reciprocating saws (often called “recip” saws for short) may be the least appreciated mainstream power tool in the world. Invented in 1951 by the Milwaukee tool company and dubbed the Sawzall, advances in blade technology and batteries are helping recip saws cut better than ever. Whether you’ve got an old house to renovate, a metalworking project to complete, an old vehicle to work on, or even some tree limbs to prune, recip saws can help you in ways that no other power tool can match. They’re mainly sold as tools for gutting old spaces for renovation, but I know from my work testing tools and using them in the field that recip saws are now much more than just renovators’ tools.

Most recip saws are long and narrow in shape, with a blade that moves back-and-forth at one end. There’s a D-shaped handle at the other end of the tool and a trigger switch within that handle. Recip saws are useful because they combine power, maneuverability and the ability to cut through a variety of materials such as pipes, nails, wood, drywall and old flooring. Until recently blade quality was a limiting factor in recip saw performance, but that has changed entirely.

Without exception in my experience, old school recip saw blades have always been surprisingly short-lived. Compared with the ever-improving quality of blades for other power tools, recip saw blades have lagged behind, but not any more. You can see this most clearly when it comes to cutting steel.

Standard recip saw blades for demolition are rated to cut through nail-embedded lumber, but hitting nails still shortens their life.  Something called carbide tooth recip saw blades changed everything. Like their circular saw counterparts, carbide tooth recip saw blades have small teeth joined to the saw blade body. These teeth are exceptionally hard and long lasting because they’re made of a special metal called carbide. In tests I’ve run, the best carbide blades made dozens of cuts through 12” spikes. In fact, the teeth held up so well in these tests that I’m still using the very same blade for my work today, years later.

So when does the ability to cut metal pay off? Salvaging used lumber from existing projects is one place. If you’ve got a deck, dock, gazebo, interior partition walls or any other wooden structure that you want to take down, simply slip between adjoining pieces of wood with your metal cutting recip saw blade, slice the nails or screws, then salvage the wood without bashing, smashing, prying or destroying anything.

Got a metalworking project planned? I find a recip saw fitted with a carbide blade is the fastest way to rough-cut steel of all kinds, including 1/4”-thick plate steel. Just use a slow speed on the saw and keep the cut line flooded with cutting oil. Keeping the blade cool and lubricated translates into long blade life indeed.

Are you into doing your own auto repairs? A recip saw is absolute magic for cutting out rusted chunks of exhaust pipe for replacement. Even many professional mechanics use recip saws for this job now, foregoing the oxy-acetylene torch that used to be used exclusively for cutting away bad auto parts.

If your opinion of cordless power tools was formed 10 years ago or more, you’re in for a pleasant surprise. Thanks to advances in lithium-ion batteries, cordless tools today have a much longer run time, more power and longer battery working life than any tools from back in the days of nickel cadmium batteries. Lithium-ion batteries retain their charge on the shelf for many months without self discharging, and most come with a multi-year warranty.

In most cases when people ask me for tool buying recommendations on a budget, I point them towards corded models unless they really need freedom from cords. Drills and recip saws are exceptions. In both cases cordless is the way to go with these tools no matter how modest your tool budget. The value is simply that good, especially when lithium-ion batteries are combined with something called brushless motor design.

Brushless motors are not yet universal on all cordless power tools, but they will be. Brushless is a mechanically simpler version of the traditional brush-style electric motors used in cordless tools for years and it is a genuine advance. Instead of internal springs, brushes and wires delivering electricity to the rotating part of a tool motor, brushless motors use simple circuitry to accomplish the same thing with no moving parts. The bottom line is a longer working life and more power extracted from a given battery pack. If you have a choice between buying a brushless or brush-style recip saw, brushless is worth it, even if you have to pay a bit more.

Another advance in recip saw design has to do with tool shape. For many years recip saws were fairly large tools made to be used with two hands. Designs like this are still around and ideal for general use where lots of room exists to work. But for situations where full-size recip saws can’t get into tight quarters, tool companies have invented half-size and even miniature recip saws. Still packed with lots of power, I find these smaller models most useful for automotive work or when cutting pipes and framing members in close quarters.

Owning and using a reciprocating saw is one small part of developing skills to help yourself succeed independently, and this tool is worth looking at sooner rather than later. I use a recip saw almost each week and I often think how much more difficult a particular job would be without one.

Reciprocating Saws vs The Jaws of Life

The versatility of recip saws comes down to blade design, so the greater variety of blades you have on hand the more valuable and versatile your recip saw prove to be. I even know one fire department that uses reciprocating saws with metal-cutting blades to cut into wrecked cars at the site of accidents. A few of my favourite blades include:

Pruning blade: This long, strong blade is made especially for trimming branches from trees and bushes. Quieter than a chainsaw and safer, too.

Hacksaw blade: This fine-toothed blade does not have carbide teeth, but it is made for cutting metal. Why a hacksaw blade rather than carbide-tipped? Blade thickness. The one weakness of carbide recip saw blades is that they’re always thicker than their plain-metal counterparts, but thinness matters some times. Sawing the nails to salvage apart lumber is one application where a thinner blade makes it easier to sneak in and get the job done.

Duct blade: If you’ve got to cut into sheet metal heating or ventilation ducts, there’s a recip saw blade for that. It’s small, short and has very fine teeth. A pointy tip on the end lets you punch a hole through the sheet metal to get the cut started.

Click below to watch a quick tour of a compact recip saw I made a few years ago.