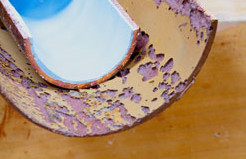 If you live in a regular, Canadian house, you’ve probably never experienced leaks from copper water pipes because copper is so reliable in this situation. Unless a pipe freezes and bursts, you can live your whole life and never experience a copper water pipe leak. But if you live in a high-rise building – especially if that building is more than 10 years old – things can be very different. Domestic water systems in multi-residential buildings work differently than what’s installed in single family dwellings, and this difference leads to an annoying plumbing problem with a solution that I find fascinating even though I don’t live in a high-rise.

One of the pleasant things about most high-rise buildings is how quickly the hot water starts flowing out of taps when you turn them on. It’s not that each unit has a water heater immediately behind a wall somewhere, but rather that hot water is constantly circulating through vertical pipes that lead to and from a huge central water heater somewhere. When you turn on the tap, hot water only has to travel a couple of horizontal feet before it flows from your faucet. As useful as this design is for delivering near-instant hot water for morning showers, the constant flow of water also creates a problem that I doubt engineers foresaw when circulating systems were originally envisioned.

As it turns out, constant water flow erodes copper pipes from the inside out, resulting in pin hole leaks in those areas with maximum internal turbulence. After 15- to 25-years service, more than half of copper pipe wall thickness is gone, though dozens of buildings have been known to spring leaks when they’re less than 5 years old. As time goes on it seems that high-rise hot water systems are failing and younger ages. And while it’s possible to patch these holes (an operation that’s often done when the first few leaks emerge in a building), new erosion is always happening. That’s why patching is only a stop-gap measure, and it’s the reason two more permanent but very different repair strategies have emerged.

How safe is the epoxy used for pipe lining? It passes the world’s most stringent safety testing for potable water situations, and since it’s only used on hot water pipes, water delivered by epoxy-lined pipes should never make it to cups or mugs anyway. Health authorities always warn against drinking or cooking with water drawn from the hot side of any water system because of the chance that heat and tank storage time has allowed chemicals to leach into the water, regardless of what the pipes are made of.

There aren’t many companies that perform epoxy pipe lining in high-rises, but one that I’ve looked at closely is RIKOS (416-410-3815). They use a three part process that involves cleaning corroded internal pipe surfaces, drying the inside of the pipe, then pumping in the liquid epoxy lining that hardens in about a day. It’s samples of their work that are shown in my photos.

North vs South of Am-Can Border:

An interesting side note is that while the copper pipes delivering cold water in both Canadian single-family dwellings and the non-circulating systems in high-rises have proven exceptionally reliable, not so south of the border. In the US, pin hole water leaks are common, even in single-family cold water supply pipes in ordinary homes. Why the difference? Best guesses point to variations in water chemistry and treatment methods. As Canadian provinces adjust water treatment standards, it’s possible that cold water pipe failures could begin showing up here, too. And if they ever do, you’ll know at least one non-disruptive way of fixing the problem.