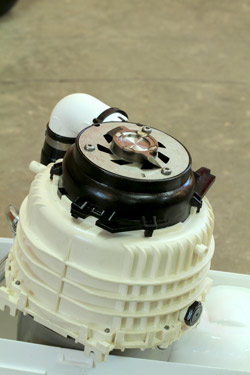 How do you install a bathroom where drain pipes don’t exist? It’s a challenge that’s stopped more than a few home renovation plans, but it doesn’t have to. It all depends on the plumbing equipment you choose to use.

Imagine a toilet that drains through nothing larger than a 3/4” diameter pipe. Imagine if this toilet system could also pump the water it handles uphill. No need for big, sloped drains. This is what a company called Saniflo (800.363.5874) makes happen. They’ve been around for about 50 years, and I’ve known them for the last 15. They have a great reputation around the world, and a strong presence here in Canada. What I haven’t seen until recently is how their systems work on a mechanical level. How, exactly, do they make it possible to hook up a toilet to a pipe that’s less than 5% of the cross-sectional area of a normal toilet drain pipe? What I found after pulling a Saniflo unit apart in my shop is an interesting combination of simplicity and heavy-duty design.

The main part of the system is something called a macerating unit. The particular model I worked with is called Sanibest, and it’s shaped like a toilet tank, except that it’s made of white plastic and plugs into a wall outlet for power. A specially-designed, 6 litre-per-flush porcelain toilet connects to this macerating unit, with additional ports for accepting 1 1/2” and 2” drain lines from a sink and shower. 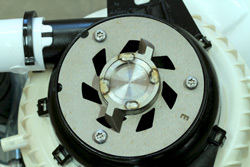 The heart of the macerating unit reminds me of a blender. You’ll find an oil-filled, motorized assembly that unbolts from inside the reservoir after opening it up. Flip the motor over and you see where the dirty work happens. A pair of heavy, angled blades rotate over the intake ports of the macerator. As waste is drawn in, it’s sliced to smithereens, then pumped up and out. The operation is noisier than a conventional flush toilet, but only operates for a short time after flushing.

New From baileylineroad.com
WHY GOVERNMENT SPREADS AND HOW THIS HURTS PEOPLE
Read Now

Q&A OF THE WEEK: “How Can I Hanging Something Heavy on Drywall?”
Read Now