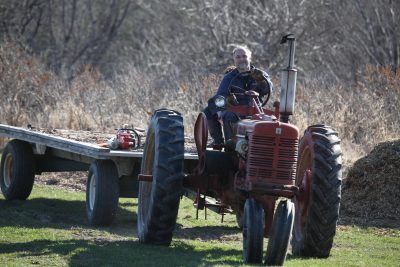 Over the last 25 years I’ve seen more than a few homesteaders try to build a life of self sufficiency but give up. Most don’t make it for the simple reason that they fail to get enough of the right kind of work done. Bills catch up, gardens don’t get planted, wood piles never get built, roofs continue to leak. And the worst of it is, the real cause of these problems often goes unrecognized until enthusiasm is sapped, relationships are frazzled and finances exhausted.  I’ve found that the ability to work productively and succeed without a pay cheque depends on putting five specific habits into practice. Make these part of your life and the satisfaction of self-reliant living in the country is one big step closer.

Habit#1: Live With a Disciplined Schedule and Intentional Rest 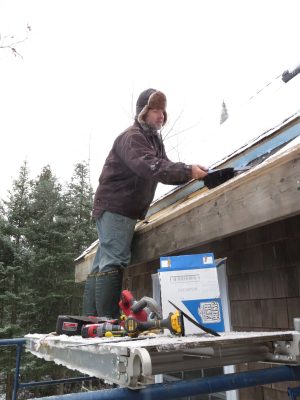 No boss, no outside schedules, no imposed deadlines. These are some of the attractions of self-reliant homestead living, but they’re also the features most likely to make you fail.  No boss means your success depends entirely on how well you decide what must get done. No schedule means your success depends on how effectively you fill your day with activities that matter. No deadlines means your survival hinges on how productive you are. Self-reliance is really about self-responsibility.

So why bother even attempting life away from the rat race if it doesn’t get you out of work? The satisfaction of gaining directly from your own efforts is one reason why.  This immediate connection between productivity and benefit is one of the things I like best about self-reliant living. This and the wide variety of different homestead tasks done with family and friends means that work becomes more like serious play. I’ve worked for wages and I’ve worked for myself on the land (combined with a computer) and they are two entirely different experiences. I’ll take the homesteading/digital combination any day. It’s not for everyone, but living this way I never dread my work day.

So what does disciplined, day-to-day living look like on a modern homestead? It starts with a schedule that includes at least 8 hours of real work each day. If the self reliant lifestyle really is for you, you’ll probably want to work longer than this each day because, as I said, work becomes a kind of play – at least most of the time. But all work and no real play isn’t good either. The older I get the more I value this particular bit of ancient wisdom about the weekly rhythm of work: “Six days you shall labor and do all your work, but the seventh day is a sabbath.”  Notice the details here: six days of work, one day of rest. Not five days of work and two days of rest, nor seven days of work and no rest. It’s a 6 to 1 ratio, and a very good pattern indeed. Feel free to disagree with me on this, but after 30 years of trying different work schedule scenarios, this yields the greatest benefits for me.

Habit#2: Do The Right Work in the Right Way 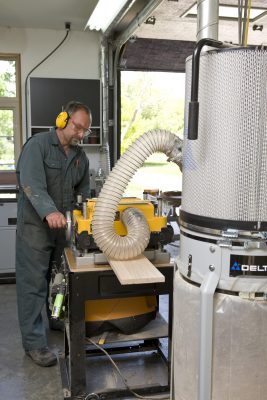 Working productively on things that don’t really matter is pretty much a waste of time. That’s why it’s so important to prioritize where you invest your efforts. This is why I make lists. During the evening, write down everything that needs doing the next day based on your goals for the following week and month. Don’t let personal preferences for certain jobs postpone tackling high priority items, and don’t worry about those things on the list you aren’t doing yet. You’ll get to them.

But busyness alone isn’t enough for successful self-reliance, and that’s sometimes the case when I see newby homesteaders struggling with inadequate tools and methods for the job. It sets the stage for the slow decay and decline of homesteading dreams. You certainly won’t be able to buy professional grade tools and gear right away, but work towards it. Doing work in the right way usually means doing it the way professionals are equipped, not hobbiests. The good news is that pro-grade tools are much less expensive than they were a decade ago.  Aim to become not just a jack of all trades, but a well-equipped master of most. It’s an achievable goal.

Habit#3: Always Carry and Use a Pocket Pad 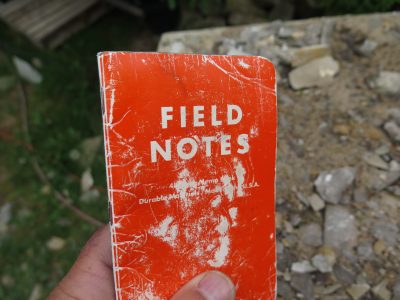 Pound for pound, my pocket pad and pen are the most important tools I own. That’s my current one to the right. A pad like this is always with me to catch the little thoughts that waft through my head during the day: “Buy 5 lbs of four inch deck screws”, “Call Rob D. about shingle order”, “Take photo of spiders in pasture for blog”, “Harvest garlic, email Gord about the video project.”

I have a pretty good memory, but why tax it unnecessarily with all the little things? More important than this, why waste a trip into town by forgetting some small but vital item to buy?

I began using pocket pads in 1987, but when electronic organizers came out I used them for more than 10 years. I’m back to an actual paper pad now and find it works better than electronics in lots of ways. Whether you use a smart phone or a paper pad, recording and acting on important details during each work day is vital because it boosts efficiency. 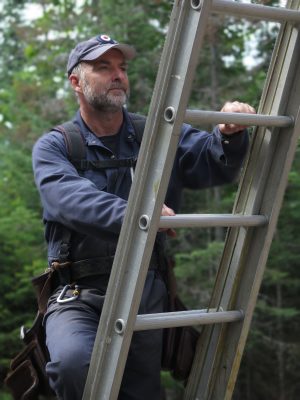 The most spectacular homesteading failures I’ve seen all involve people who talk a lot and move slowly. If you do this in a regular job, you’ll either top out at a junior level or you’ll get fired. What you might not realize is that your homestead can fire you, too. When bills catch up and the garden doesn’t get tilled in time and your wood pile is too small come November, the homestead will hand you a pink slip and it’s at least as shocking as the regular kind. Actually, more shocking and more painful.

Simply moving quickly as you walk around and perform tasks can boost your self-reliance output by 20% or 30%. It’s not about running around frantically, but rather about being deliberate, focussed and efficient.  Once this becomes a habit, productive work isn’t something you even think about any more. It becomes the new normal and it makes life more interesting. And I’ve found that the more boring the job is, the more important it is to move quickly and productively. 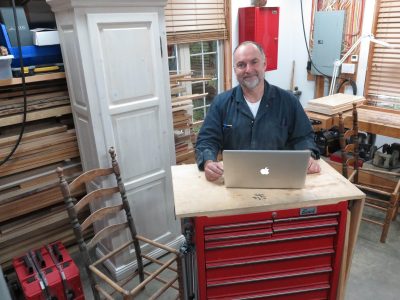 An old timer I know tells a story of how things used to be in the countryside where he grew up during the 1930s. “We were dirt poor back then, just like everyone in the area. I owned two shirts – one for school and one for church – but everyone still managed to keep their barns repaired and houses painted. Nowadays people sit inside watching satellite TV or YouTube while their places fall apart around their ears.”

Social media, television, computer games, online videos – all these things can be addictive and costly to self-reliance because they create a leisure mentality. And while this certainly debilitating for everyone in every place, the leisure mentality is a big enemy to successful, self-reliant homestead living.

No responsible boss would allow you to watch daytime television, play games during the work day or socialize online while you’re on the clock, and it’s not just because the boss wants to spoil your day. The fact is that unless we’re financially independent, we all need to get things done, regardless of whether we work and live entirely in the money system or on a homestead that relies on money for just 30% of its needs.

The internet is essential to our particular self-reliant homestead, both only for information and to earn the money we need. Just understand that the modern world is full – and I mean full – of distractions that turn people into spectators and consumers rather than participants and producers. You’re free to succumb to these distractions during the work day, but this addiction could cost you your dreams of a self-reliant, hands-on life. Probably will.

Learning the nuts and bolts of hands-on living is important, but not as important as learning the one, main skill on which all others depend. I want to see more modern homesteaders succeed, and getting things done in a timely and efficient way is the most important part of making successful self reliance happen.

A Day In the Life

Our modern homestead household includes 5 kids so far, so there’s always lots to do. My day begins between 7 and 7:30am, either working on the digital side of my homestead life or the practical side of hands-on jobs like fixing machinery, tending cattle and fences, working in the garden and tackling building projects around the property. My wife Mary is a full-time homemaker so she has lunch ready for the family at 12 noon, then it’s back to work from 1pm until 6pm. The family helps with clean up after supper, then it’s either family time for a few hours or the chance to work together in the evening. This is the pattern for 6 days a week, with no work beyond the essentials on Sunday. One thing you might not realize is how the variety of a homestead work week makes it so much nicer than paid work, at least for me. I look forward to Mondays just as much as Fridays, and I’m excited to get out of bed each morning. Our resource footprint is small because we don’t travel for work, we heat with wood and we make, reuse and repair a lot of what we need.

What Is a Homestead?

I don’t know anyone who wants to live entirely without money, and how you earn money is an important part of successful self-reliance. Even the first settlers where I live on Manitoulin Island, Canada, supplemented their subsistence farming with lumbering and, eventually, the production of cream. Both brought money into the farmstead without anyone leaving the property, and I believe this is the essential feature of homesteading now, too. I’ll say it again: Earning money without ever leaving your property is the most important homestead goal. Small scale cream production isn’t viable these days as it was in the olden days of Manitoulin, but the internet offers a better alternative. It’s one powerful way of earning income without leaving your homestead property. Make digital income happen in some way and you’ll be one big step towards creating a sustainable and satisfying homestead life for yourself.

What Kind of Chicken Are You?

Think of the way people produce a living for themselves as a point on a number line. One end of this line involves you producing everything you need directly, with your own hands. The other end is a lifestyle where you produce nothing directly for yourself, earning money to buy everything you want and need. Most of the developed world functions at the extreme money end of this spectrum because it delivers the most amount of stuff for the least effort. But for some of us at least, a lifestyle pursuing money as the only means of material gain has hidden costs that never show up in economic analysis.  I’m convinced that a great deal of what surfaces as depression and anxiety finds it’s roots in lives that are too specialized. It’s like the difference between free-range chickens and factory chickens. Free birds scratch the earth and feast on bugs and grass and wild seeds in addition to feed supplied by the farmer. Factory chickens, on the other hand, focus on laying eggs 24/7, never enjoying the challenges, risks and rewards of life in the open. What kind of chicken would you rather be?

The thing about being more of a self-reliant free-range chicken is that you need to be at least a little self-directed and entrepreneurial.  The more of your own feeding you want to do directly and the less of the farmers feed you eat, the more responsible you must become.