Hi! I’m Katherine, Steve Maxwell’s daughter.  Growing up at the house on Bailey Line Road, I always felt the urge to create things.  It might have been a drawing or an old yogurt container turned into some sort of device. Dad and I once turned a worn out work sock into a dress for one of my Barbies. As long as it was something I could make with my own two hands, I was interested.  What I work on now is different than most things Dad makes, but if you’re into hands-on creativity, I think you’ll find my story interesting, especially the part about corsets.

Over the years my creativity has manifested itself in different ways.  As a teenager and young adult, drawing and painting were “my thing”.  Then, after getting married and having kids (four boys and counting, (all 7 years old and under at the moment), you could say my creativity went “dormant”. It’s probably more accurate to think of mothering and tending a house as its own form of creativity.  Over the past number of  years, however,  a new form of creativity has been growing and evolving for me – something I never would have expected, but which I find more fulfilling than I could have imagined. It all comes down to – believe it or not – vintage corsets.

A Trip to the Museum & a Lifelong Corset Passion

When I was about 8 years old, my family and I took a trip to Toronto, Canada.  On this trip my dad and I visited the Royal Ontario Museum.  Though seeing a real life Egyptian mummy was quite enlightening, this wasn’t what stuck with me the most.  There was a special exhibit at the museum when we visited, all done by a woman who created the most stunning historical dresses, shoes, and outfits – all out of tissue paper.  I couldn’t get enough of them.  It was astounding. These tissue paper garments were all true to historical details, and absolutely stunning to look at.  Upon getting home, I instantly set to work, making shoes out of duct tape and that sort of thing.  That experience didn’t lead to anything directly for me at the time, but it planted a seed which has since been growing.  Let me explain.

About 7 years ago, after my first son was born, I slowly took up sewing.  A generous family friend introduced me to sewing and worked with me making things for many months when I was young, so that must have planted some seeds. One of the first projects I made as a grown-up was  a Victorian corset.  You could say it was that old interest in historical clothing coming out again.  The corset turned out to be a disaster – so uncomfortable that I never wore it. I forgot about the whole corset thing for a couple of years.  During that time, however, I began sewing more basic garments, and designing and drafting my own custom-fit patterns.  That was the beginning of something big.

After my third son was born, I made my second corset.  That’s the one you see above. Why? I guess I suspected there was something positive about wearing corsets and I wanted to know for sure. Hollywood makes corsets out to be some kind of torture that dominant males visited upon women in the Bad Old Days, but is this true? Hollywood isn’t exactly known for fidelity to the truth, is it? I had put more thought and time into making this third corset, and it fit much better than the first one.  In fact, it was so comfortable (and so comforting) that I proceeded to wear this corset “to death”.  I have since discovered a passion not just for sewing historical corsets, but for all aspects of historical dress – including the wonderful comfort and support offered by corsets. These days I wear them all the time and know women (many young) who are so thankful  they’ve discovered corsets, too. Allow me to let you in on a secret. Corsets aren’t bad! No, not at all. They’re not torture devices, nor symbols of female oppression. Quite the opposite.

Something I’ve noticed about my generation of women is that we aren’t nearly as opposed to corsetry as our mothers and grandmothers’ generation is. That’s probably because we didn’t grow up amidst the constant campaigns to blacklist corsetry, as older women often were. Amidst all the other social changes that were happening after WWII, corsetry was simply a microcosm of the larger world and the campaign to change the way women thought about themselves.  Another factor behind the blacklisting of corsetry could also have been corporate interests. Corsets don’t exist in a vacuum. They were a small part of a type of wardrobe which was made from non-stretch, natural, woven fabric, tailor-made to the individual, and form-fitting in the upper body. None of this whole custom thing works with a corporate agenda to provide mass-produced clothing for women.  After all, what’s the point of wearing a corset if your clothing fits like a one-size-fits-most burlap sack? At the time in history, when corsets began “dying out”, corporate interests in the garment industry were all for mass-production, conventionally sized garments using cheap synthetic materials. The new thing then was synthetic stretch-fabric, looser styles of clothing, and a greater emphasis on women’s legs rather than their upper body. Could corporate interests have anything to do with the dark reputation of corsetry in media and, as a result, public opinion?

In addition to corsets not being “torture devices”, they actually can have a number of surprising benefits. Improved posture, improved abdominal muscle support, reduced back and pelvic pain, and even emotionally calming – they’re all benefits from the deep pressure therapy that corsets provide. I know and love corsets, and that’s what prompted me to help others discover what I have through my online course. 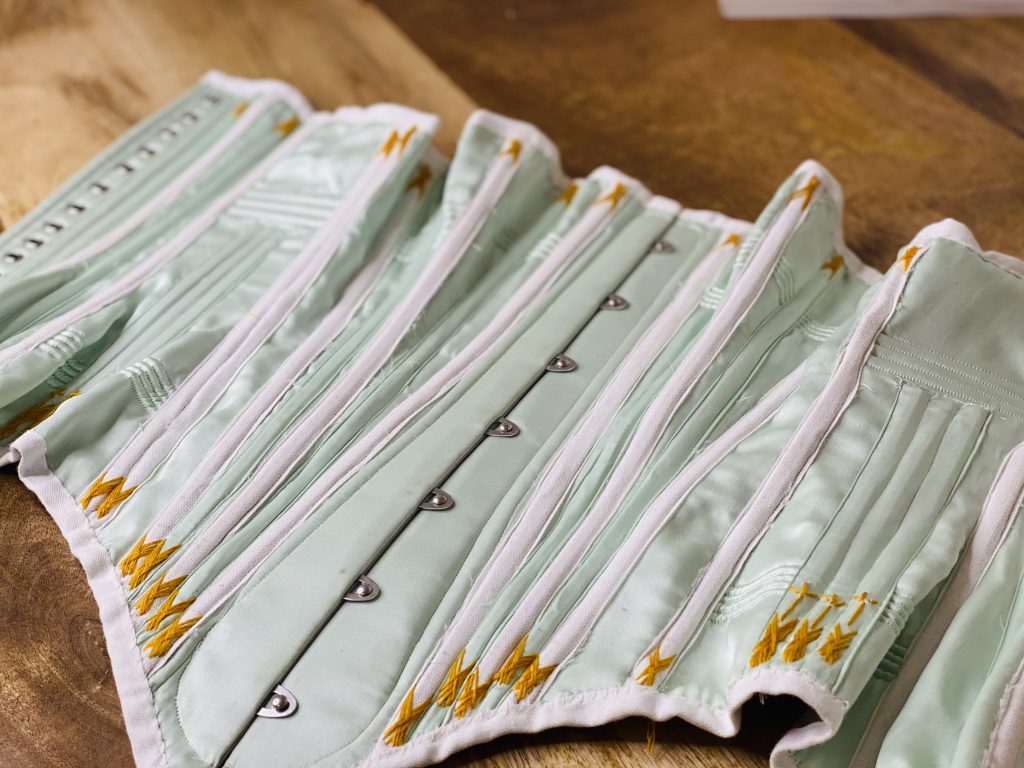 Through connections with likeminded creators and hobbyists over the past couple of years, I’ve come to see a need in the sewing community for training on making corsets.  As I’ve discovered, there are many people out there, especially in my generation, who admire historical corsets, both for their function and aesthetics, and would love to be able to make one for themselves, but have no idea where to start.  Making a corset is one of the most challenging garments to sew if you try to teach yourself, but with experienced direction it becomes a lot easier. Click below to learn more. 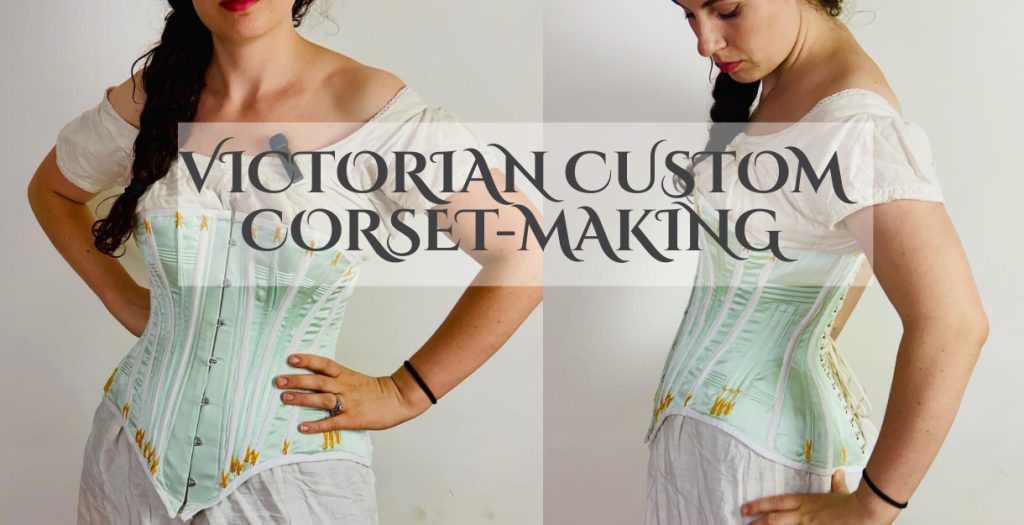 With nearly 4 hours of instructional video, 11,000 words of written directions, and direct access to me for answers and advice, my corset-making course has everything you need to make a custom-fitted corset. You can work at your own pace, with me guiding you through the process. Everything from creating a custom-fit pattern from body measurements, to making a mock-up, to sewing a stunning historical corset with beautiful detailing – it’s all here.  In addition to lifetime access to the learning resources, you also get one year of one-on-one coaching with me.  Sometimes specific issues can come up that require the help of a mentor to sort out. I deeply enjoying the process of working with likeminded people and helping them achieve their sewing and wardrobe goals. Perhaps you’d like to join me. The video below goes into detail about a reproduction corset I made recently.

Did you find this interesting? I hope so. If you’d like to support Katherine and her work, please consider making a contribution using the “buy me a coffee” button below. I’ll see that all donations marked for Katherine go entirely to her. This is Katherine when she was 6 or 7, making a walking stick with a spokeshave.