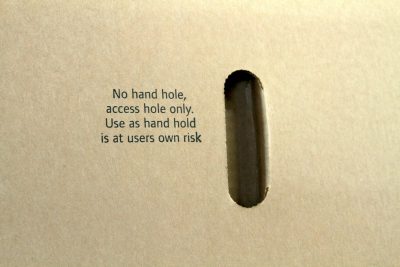 A roll of plastic pipe I ordered a while back arrived in a carton that makes me concerned. A stern, 15-word warning of the sort I’m seeing more and more often is the reason why. It highlights a creeping menace that’s making it harder for risk-takers to make good things happen in the real world — including people who build and renovate. You can see the words and carton for yourself to the left:

“No hand hole, access hole only. Use as hand hold is at users own risk.”

Legal warnings about cardboard hand hole hazards are ridiculous on two counts and worrisome on a third. First, the oval holes were obviously made so you could grab the light but bulky 20 lbs carton and pick it up.  Second, the idea that these holes could be used to “access” a stiff, coiled, bound roll of pipe is insane. The diameter of the pipe is bigger than the width of the oval. Short of looking inside to see if the pipe is actually there, what’s the point of “access” like this?

The worst thing about a cardboard hand hole warning is what it says about society and the so-called “justice” system. A world where companies need to protect themselves against cardboard hand hole lawsuits is a world where an unelected, unaccountable legal system has gone way too far in its quest to profit from absurd and debilitating litigation. This kind of dangerous nonsense isn’t rare, either.  As ideas of personal responsibility are shoved aside by the foolishness that passes the most basic personal risks back to employers and manufacturers, our world is left with more red tape, more legal hassles and less productivity.  Why are we people taking this kind of thing lying down? Perhaps it’s because we don’t know what to do about it.

It’s easy for us to pass this off as nothing that matters to each of us, but it should matter to all of us. Ultimately, all the hassles of red tape and the threat of litigation ends up costing is more for everything we buy. How much of your monthly expenses end up in the pockets of a bureaucracy that profits from the “over-protection” industry? Probably more than we realize because it’s all so well hidden. But all this foolishness costs us more than money. This same bureaucracy snuffs out innovation and the kind of entrepreneurial spirit that made the western world great. How many super ideas have been killed because of legal fear and red tape that profits from removal of personal responsibility in society? I know of many and I haven’t even looked hard. For instance, a ladder manufacturer I know spends more on liability insurance than he does for all other costs of manufacturing his ladders. A riding stable near my house closed up because it couldn’t afford the insurance rates. I could go on.

Maybe I’m over-reacting, but doesn’t it seem deeply dysfunctional when a company has reason to fear lawsuits enough to warn people against using cardboard hand holes in boxes for actually holding the box? Could it be that maybe the best way to combat this kind of nonsense is by intentionally taking on more responsibility for ourselves?

Perhaps we should all do something really daring today and pick up a cardboard box.  Don’t sign a waver, don’t call government inspectors to make sure we’re doing it right, and definitely don’t have a lawyer on retainer so you can quickly launch a lawsuit if anything should go wrong.  It sure doesn’t take much to be a true radical these days, does it?