When my wife and I moved one of our sons into university a few years ago, I couldn’t help but notice all the posters around campus advertising free help for mental health issues. Not that I was surprised. As the years roll along, and I see life through the eyes of my five kids, I hear about more and more young people with debilitating depression or paralyzing anxiety.  I’m convinced there’s an increase in this sort of trouble, and I don’t buy the argument that “we’re just more aware” these days. That’s hogwash and easily proven so. The big questions for me are “why the change?” and “what can be done to help?” One option involves something simple I’ve never heard anyone suggest. 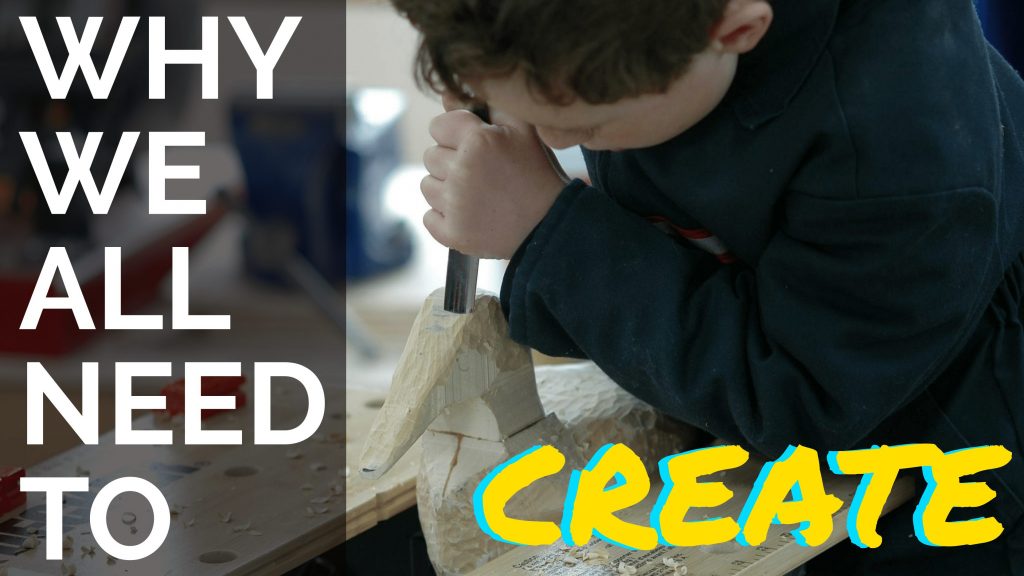 While it’s true that the wider world is different than it was, the inner world of young people is even more different. One of the biggest differences is a shift in what I call the “creative versus consumptive balance”. When I became a teenager in the 1970s, it wasn’t unusual for kids to have significant, self-directed creative activities. I rebuilt motorcycles and built furniture for sale and built radio controlled airplanes in my parents basement. Teenage buddies of mine poured themselves into fixing up old cars. I had teenage friends who sewed clothes, built backyard sheds and tilled vegetable gardens as a sideline business. This sort of thing happened with virtually no parental encouragement or involvement and was normal and healthy.

By contrast, these days, it’s rare that I see young people who make, fix or create anything.  Instead, the big focus is on smartphones and the consumption (not creation) of digital products made by others. Eyes glued to the screen, mesmerized binge-watching other people’s videos, reading someone else’s ill-informed outrage, or listening to music made by others. Could it be that people are happier when they have ongoing, hands-on creative activities in their lives? I believe so. Could the widespread increase in anxiety and depression in young people have something to do with the shift towards constant, pointless consumption and away from meaningful personal creativity? I think so, but there’s a problem. The world today isn’t boring enough.

For a number of years ago I had a neighbour named Ivan. He was born in 1909, passed away in 1995, and played fiddle music in his spare time and at country dances. He taught himself to play when he was a teenager in the 1920s. No lessons, no parental involvement, no school band. He simply found an old instrument, figured out how to tune it, then learned to copy the old songs he heard local fiddlers play. He did the same thing with bagpipes. Ivan was just an ordinary guy living in an economically depressed backwoods corner of rural Canada, but he benefitted from something we now need to get intentional about.

I’m told by people in the know that the addictive nature of the internet in general and social media in particular is intentional. Would Ivan have taught himself to play the fiddle, enjoying years of music created and shared with others if he’d immediately extinguished every feeling of boredom with a shot of digital dopamine from a “smart” phone?  Probably not. The impulse that drove Ivan to get off a chair and master the fiddle as a boy was the same thing that prompted my teenage friends and I to make, build, fix and create. Boredom was the driver. The world of prepackaged entertainment wasn’t that great in my teenage years and it was non-existent for older people like Ivan. Plenty of room was left for boredom and the resulting impulse to create.

The value of creativity is that it pulls mental focus off ourselves and onto something where quality, effort and personal drive matter. The ironic thing is that the more we make room for a little mandatory “boredom” in our lives, the more incentive we’ll feel to pursue real hands-on creativity that leads to joy, happiness and true freedom from boredom. Could it be that what young people really need isn’t more time on couches talking to mental health professionals, but more time in front of woodworking benches or under a car with a wrench? Judging by the fact that despite all kinds of professional help offered to young people, record numbers remain in mental crises, I believe I know the answer why. The big question is, “does there exist sufficient drive in our society to make the massive cultural shift towards greater mental health?” All I know for sure is that if something like this is ever going to happen, it must begin with parents and grandparents enforcing a certain amount of boredom on their kids to create the necessary impulse for action and creativity. .