When I show people the 10 x 20-foot cabin where my wife, Mary, and I lived each spring, summer and fall from 1986 to 1990, along with our golden retriever, King, they usually shake their heads and wonder how we did it. This is the place just after we put on a coat of primer. We lived there while we were building our house in the country, but the truth is, the cabin life was the lap of luxury for me at the time. I count it as some of my happiest times. It’s all because of where we lived before and what the cabin lifestyle helped us to achieve.

When we began developing the 90-acre, building-free piece of forest and farmland where we live today on Manitoulin Island, Canada, our home was a 7 x 9-foot tent, pitched beside our 1968 Mercury F-250 pick-up truck. Camping has its attractions, but they do wear thin after weeks of damp sleeping bags, low headroom, and complete lack of running water. Looking back on things now, Mary and I must have seemed destined to fail in our idealistic plan to build a place of beauty, peace and permanence for ourselves. I now understand why some of the neighbours shook their heads at the time.

But two things served us well during our adventure: a commitment to live and build as cheaply as possible while also maintaining high standards of craftsmanship and beauty. We failed pretty badly at these things in the beginning,  but were also determined to work hard and effectively for as long as it took to achieve success. And as it turned out, our cabin lifestyle was crucial to both these goals. 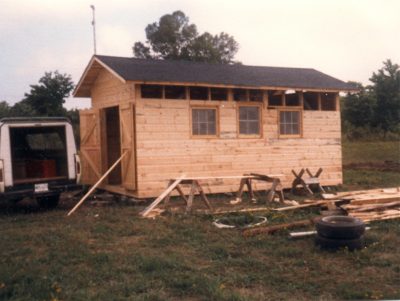 We’ve always called our cabin “The Shed”, and neither of us had ever built a structure before tackling the job. It took us four, 60-hour weeks to put up the building at a cost of $550 in materials. That seemed like a ton of money to us at the time, even with my cost-cutting approach in full swing. I  cut logs from our forest for the floor frame and hewed balsam fir trees into rafters with a broad hatchet, buying the least expensive, locally-sawn lumber I could for most of the rest of the project.

The biggest blessing of cabin life is simplicity, but you don’t get that benefit just because you’re living in a tiny space. In fact, micro-homes will drive you crazy it you’re not diligent about design and how you live. For the cabin lifestyle to work, we found it necessary to be ultra-organized all the time. Hooks, nails, pegs, shelves and folding cots allowed us to live in the space comfortably, yet also use it for tool storage, workshop tasks and hardware storage during the workday. We even had enough room to share the space with a sick calf for a while once. It was a twin that had been abandoned by its mother.

If you can get and stay organized, living the cabin lifestyle is wonderful for your personal productivity. With no distractions from entertainment, we happily worked 12 hours a day, 6 days a week building the stone basement that would sit under our house. We put up the three-story frame of our 2500 sq. ft. home in one season of distraction-free cabin living. 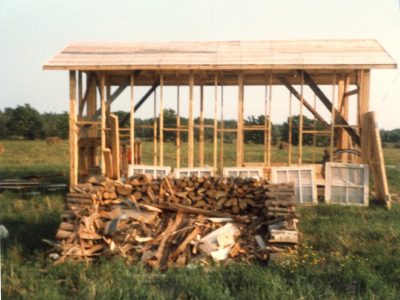 Kitchen appliances in The Shed included a two-burner hot plate and a deep crock-pot. Toast was made in an old-fashioned, flip-down manual toaster. Our 1951 Frigidaire was more than adequate for keeping perishables cold. Water (cold only) was supplied from the nearby well we had drilled, pumped into a pressure tank in a corner of the Shed. Baths happened every single Saturday night whether we needed one or not. Our steel-panned wheelbarrow was the tub, filled with water heated one gallon at a time in the crock-pot. We washed our work clothes on a scrub board used in this same wheelbarrow, then strung the laundry out to dry on ropes installed across the inside of The Shed.

Does all this sound spartan? I suppose it was, but the benefits were very real. Living simply in a cabin allowed us to build for three seasons each year on the money we earned back in the city over the winter. Cost cutting, efficient living and focussed work made this possible. I see now, more than ever, that it’s a tremendous luxury being able to build your dream home for three seasons a year and never leave the property to earn money to do it. Luxury doesn’t always involve broadloom, big budgets and large-screen television sets.

All this being true, I’m not sorry that we don’t live in The Shed any more. We’ve got five kids now, and it takes more than 200 sq. ft. of living space to raise them with any degree of sanity. But someday I look forward to experiencing the cabin lifestyle again, even just as an occasional retreat.  There’s something about the tiny size of a cabin that makes it easy to be at ease. Some of my fondest cabin memories go back to cool fall evenings. I’m tucked into my sleeping bag, dog-tired, as the warmth of the antique woodstove wafts across my face.  It’s the kind of deep-down joy that only happens when you mix hard work, a compelling dream and your own piece of land. 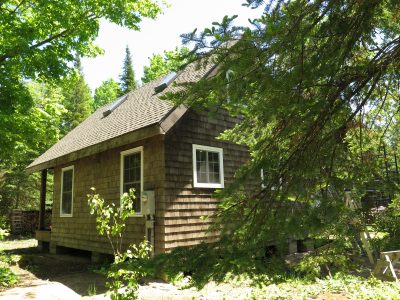 If I were thirty years younger, starting an adventure in the country again, I’d certainly include a cabin in the plans. It would be a little different than what I built, though, starting with the size. I originally picked the 10 x 20-foot dimensions out of thin air, with no experience to base that decision on. Now I know that even five more feet of building width would have improved the usefulness of The Shed a lot. I’d also have been less stingy on the building materials. If I had built it with insulation, hot running water, and a small sink with a drain, I could have extended my building season further into the spring and fall. I really wish I had built the place on a deep foundation, too. Right now the old Shed is looking a little wonky as its frame-on-grade base moves a little with each year’s frost.  But I know our kids wouldn’t let me tear it down. It’s a place of legend for them, a tangible connection to the stories we tell them about how their family came to set roots down into the land. In fact, the roots go so deep that my oldest son, Robert, has done the cabin thing himself. We built a cabin for him in a forested corner of our property, and now he’s a husband and father there. His cabin (we call it The Cabin) is much nicer than mine, thanks to the fact that he listened to his old man and let me work with him to design something that’s so much better than what I had. 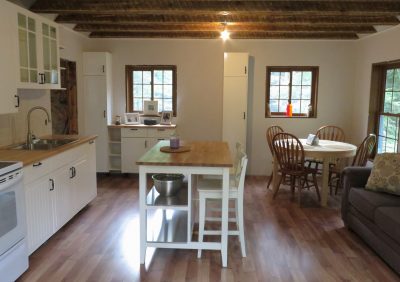 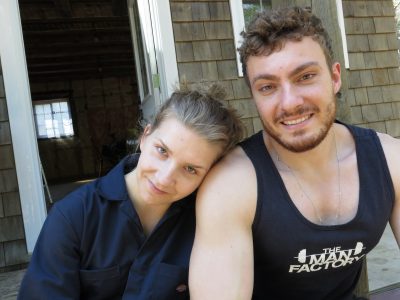 In fact, Robert’s cabin design is getting pretty popular online. Click here for a detailed visual tour of his place, learn about the four-season design we came up with, and see how a handful of people all over the world are now building this same cabin on their own pieces of land.  That’s Robert and his wife Edyta sitting on the porch of their cabin.