Sometimes beauty sneaks up and surprises you in the most pleasant of ways. That’s what happened back in December 2017, when the world was still as it’s supposed to be. Beauty showed up unexpectedly in a little stone church in the middle of nowhere on the west end of Manitoulin Island, Canada, but it began with an invitation a few weeks earlier.

“You should come to the candlelight service at the Elizabeth Bay church”, offered Anne, a woman in the book club that my wife, Mary, attends. “It’s always great.” Anne is a discerning woman, and the kind of person whose recommendations mean something. That’s one reason we didn’t take long deciding to go. The other was the church itself.

Elizabeth Bay is a tiny farming community founded in the late 1800s on western Manitoulin Island, Canada. Like a lot of rural places, Elizabeth Bay has lost something of its vitality over the decades. Looking at the map, there’s probably no more than 500 acres of tillable land in the community. The rest is the famous Manitoulin flat limestone rock, or areas with soil too shallow to ever clear and cultivate. Families with names like Ainslie, Williams, Noakes, Morden and Blackburn wrestled a life and community for themselves from the forest beginning in the 1880s and 90s, and part of this wrestling involved building a stone church.

The thing that often surprises me about the past is how much more of their resources people poured into building things than we do now, especially considering how much less affluence and conveniences they had back then. The Elizabeth Bay church is a classic example. Even though there were churches in communities less than 10 miles on each side of Elizabeth Bay, and even though the people of Elizabeth Bay were meeting for church services in a school that wasn’t being used on Sundays anyway, in 1912 they decided they would build a real church. And not just a wood frame church, but one made of stone – the Rolls Royce of building materials. How is it that ordinary people back then – working full time simply to eek a meager living from a stingy land – would still take on the job of building a stone church with a steep roof and walls 24” thick using only hand tools, while we’re 10x more affluent than they were, with much better tools and building technologies, yet we feel hard pressed to walk 20 yards in from the parking lot through 6 inches of snow?

At any rate, it wasn’t until June 20, 1926 that the stone church in Elizabeth Bay was ready for its first service. Fourteen years had gone by since the project was first conceived, but to be fair, western Manitoulin Island did have to contend with World War One during that time, just like the rest of the world. 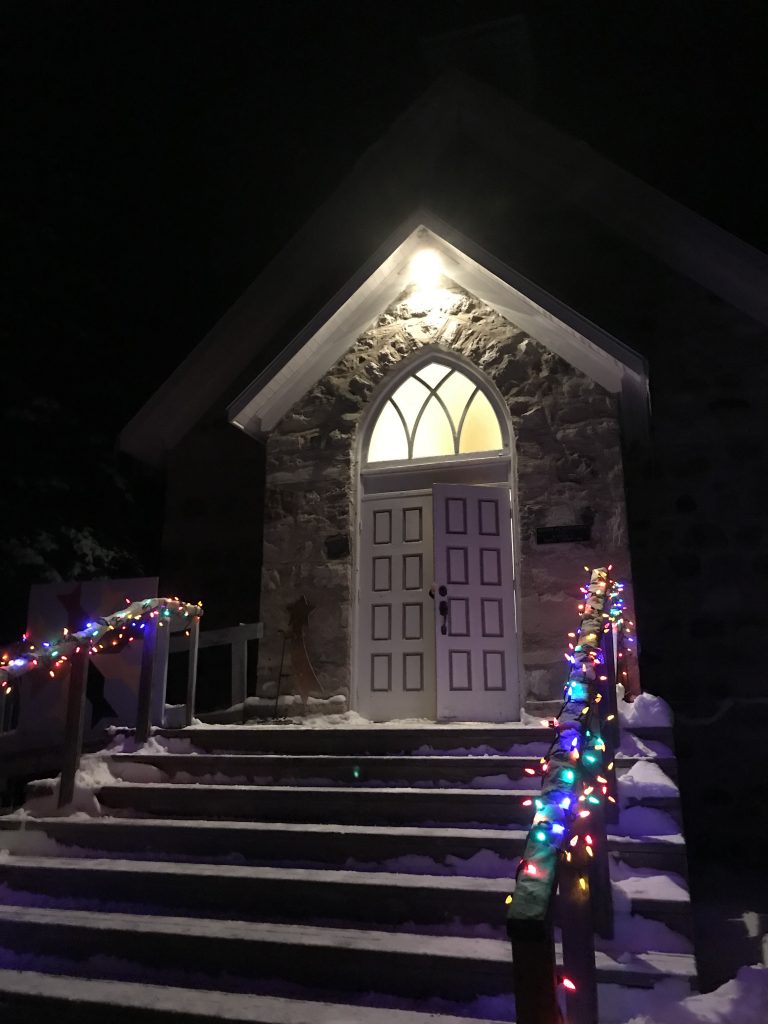 Have you ever seen the paintings of Thomas Kinkade? He called himself a “painter of light”, and he specialized in cozy scenes of pretty villages and rural landscapes that look more inviting than most things you see in real life. If you don’t know his work, click here to see it. It’s important you have a mental picture before going on with this story.

Driving up to the Elizabeth Bay church on that dark, snowy Sunday night was like stepping into a Kinkade painting. The church is well off the highway that runs across Manitoulin, a 10 minute drive and several turns down a side road that’s completely dark and empty. There are no houses nearby at all, just forest. And there, in the middle of the middle of nowhere, you see lights ahead, lots of tall, beautiful windows lit up in celebration. There are Christmas lights lining the wide, long staircase too, going up to the big double doors with an inviting light above it. I felt the tingle of magic. Fresh snow had fallen earlier in the day, and a few flakes were falling when we arrived. There’s no wind, and the heavy hush from the fluffy fresh snow somehow feels like a thick quilt.

Stepping into the church, it’s nearly full already. And there are people there that I didn’t think had a heart for church, and other faces I’d seen earlier that day in the morning, when my daughter, Ellie, had sung a solo in another church. We’re not in the habit of attending two services on Sundays, but it seemed promising that other people would drive 20 or 30 miles for the candlelight service that was about to unfold, even though they had sat through a service earlier on that day. Christmas does bring more people out to church, but it felt encouraging that it wasn’t quite Christmas yet and the old place was still full to the brim. This must have been what it was like when the people who built this place and loved it and loved God walked the earth. It was an olden days moment.

I’m pretty picky when it comes to church services, but I have to say that what happened  in that little old stone church was one of the most meaningful things I’ve ever experienced in a church. How did this happen? It’s a good question, and surprising to me since the denomination behind this church is not one that I agree with on major points. It’s never possible to put your finger how causes a little magic to appear now and then  – who knows where the Wind comes from or where the Wind blows to –  but the pastor there had put a lot into the preparations and it showed. A man named Irwin and a woman named Melody did some remarkable readings for us. The music was led by local people playing and singing because they wanted to.  The combination of truth preached, beauty seen and details attended to were definitely part of the experience. The icing on the cake was all those voices in the congregation singing like they meant it. All of them

At the last minute my wife and I convinced our youngest, Ellie, to stand up and sing a solo she’s been working on – “It’s Beginning to Look A Lot Like Christmas”. She was 9 years old at the time, and the video below is her singing the same song in the church we were at earlier in the day. I don’t know why I didn’t think to record her singing in the Elizabeth Bay church. I should have.

Depending on your perspective on life, you may find this story encouraging or foolish. I don’t know how you see things beyond the here and now, but no matter what, I hope you find it interesting to know that out here in this very quiet, very vintage part of the world, there still exists some measure of continuity. A little stone church built more than 90 years ago by hardworking people long gone still serves the purpose for which it was built. We sang many of the old songs they would have sung back then in 1926, and we sat on the same pews. The old timers would have been pleased, I think. I don’t know who takes care of the old church now, but it was in perfect condition the last time I saw it. Stonework lasts a long time on its own, but the insides of the place looked new, too. That’s not something that happens by itself. Obviously, some people still love this place a lot, and isn’t that something we can all agree is a good thing?

Merry Christmas, and thank you for spending time with me.