I’ve seen too many home break-ins to have much faith in locks anymore. I used to trust them, like most people still do, until I saw the havoc that an average shoulder can so easily wreak. Most locks themselves are plenty strong, but a couple of good hits and the wooden door jambs found in most homes simply blow out in smithereens, leaving free access for bad guys, and a nasty trim repair to complete. Steel doors and frames are different, of course, but whose house has those?

Setting the issue of false security aside for a moment, you’d have a lot of explaining to offer police and insurance adjusters after a break-in if you simply left doors unlocked all the time, allowing thieves to walk away with your stuff, shoulders unbruised. No, we homeowners are expected to suffer at least a token amount of damage to prove we did our part to keep bad guys at bay, so we continue to use locks, despite the futility and the daily fuss of fumbling for keys, leaving them under door mats for friends and family, or memorizing security codes. If we’re all forced into a daily activity that’s both pointless and necessary, it might as well be as easy as possible, right? That’s why the new Weiser SmartScan system caught my eye.

It’s the first consumer-grade lock set I’ve seen that eliminates the need for keys and codes. I suspect w 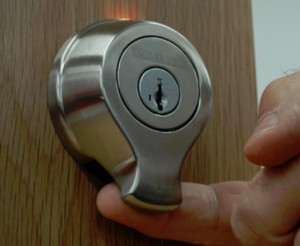 e’ll see much more like it in the future. All you need to open a SmartScan is the swipe of a registered fingertip.

The use of personal physical features for identification and entry is generically called biometrics, and it’s not new. Biometrics have been used in high-level government and military security systems for years. But at $200 for a SmartScan lockset, it opens the way for ordinary homeowners to benefit from the technology in a form that looks much like an ordinary deadbolt lock. It even installs the same way as regular lock hardware, too.

The SmartScan incorporates a small, weatherproof shroud that extends below the bottom side of the lock body. This shroud houses an optical reader that registers and recognizes individual fingerprints for entry access. If the system knows you, a finger swipe retracts the deadbolt (usually). If it doesn’t, nothing happens. It all sounds like a great idea, and it certainly looks cool, too. But how does it actually work in the real world? That’s what I set out to discover with a SmartScan mounted on a simulated door panel in my kitchen, in a world full of kids and hustle and dirty fingers.

You need to start by registering fingerprints to be recognized by the lock, and for this you pop off a cover on the inside face of the door. A touch pad just below the four AA system batteries (they’re supposed to last a whole year) takes you through various phases of registration. Three swipes of a finger are required for the job. I found the system a little picky sometimes, even when tweaked to the most casual level of sensitivity. Expect to invest several attempts at registration before the system approves. I definitely found it necessary to help the little people in our house swipe fingers properly for registration and use. The instruction manual offers the rather gruesome but prudent suggestion that you register two fingers for each person, just in case one digit gets inadvertently removed and you need to get inside in a hurry.

My first few attempts at actually opening the lock with my registered (and still attached) fingers proved hit-and-miss until I realized something important. You need to wake the system up with a touch of your finger first, before swiping. Wake-up triggers a light on top of the lock body and takes just half a second. My older kids got pretty good at waking and swiping and opening the lock, but I doubt anyone under five or six years old could operate the SmartScan reliably without help. At least not as the technology exists now, anyway. Consumer level biometrics will no-doubt get easier to use as time goes on. Remember how finicky grocery store bar code readers were when they first came out? Now they’re virtually glitch proof, recognizing just about everything that whizzes past. The lock also comes with a set of keys, just in case something bad happens to the lock or your two registered fingers.

One nice thing about the SmartScan is that it’s smart. You can register individual fingerprints for access all the time, or only during specific periods of the day. The fit and finish of the unit is terrific, too. Now if only we could do something about all those wooden door jambs, bad guys everywhere would have much bigger shoulder bruises.