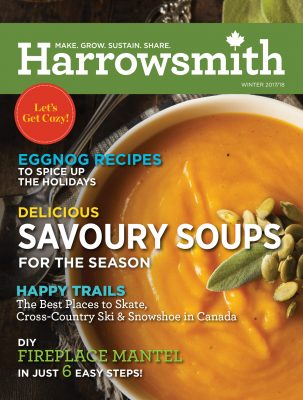 It was the late 1970s when I first got interested in learning how to live in the country. I was a teenager then, growing up in the suburbs of Toronto, Canada’s largest city. The only physical connection to farm living I had back then was the grain fields across the four-lane blacktop in front of my house. Manicured lawns and white picket fences on my side of the road, tractors and grain fields and the odd male pheasant calling in the spring on the other side. It was a stark difference and my heart was clearly on the other side of the road.

The first tangible move I made towards the rural life I’ve been living for the last 30 years was to sign up for a subscription to a magazine called Harrowsmith. It’s impossible to love a magazine more than I loved Harrowsmith. It became my source of information, inspiration and reference material. Information was much more scarce back then, so I kept each issue until I had large stacks of them under my bed. I knew each article and advertisement like I’d written them myself.

I was closely connected to the tone and topics covered by Harrowsmith, and though I never met the founder of the magazine, James Lawrence, I know exactly what kind of man he must have been. He understood the beauty, the feelings and the practical side of real rural living. He also understood what a precious trust our rural lands are. Mr. Lawrence also understood that the countryside wasn’t just something to be looked at and admired from afar, but something we have a legitimate responsibility to partner with in a hands-on way.

By 1989 I’d started my rural adventures on Bailey Line Road, and I remember opening a fresh issue of Harrowsmith in November of that year and being horrified by a very questionable advertisement for lawn treatment chemicals. This sort of thing had never happened before in the Harrowsmith I knew. It should never have happen. Something had clearly changed in my beloved magazine. It was a black day and it was just the beginning.

I didn’t know the details at the time, but Harrowsmith had been sold to a big publishing company and they’d started milking the magazine for all the advertising dollars they could get. It broke my heart to see the publication prostituted like this with a noticeable change in focus, and it was the beginning of the end for the Harrowsmith I loved. A lot of other people must have felt the same way. The reputation of the title remained for years, but the soul was gone, at least for a while. The lights finally flickered and went out on Harrowsmith in 2011, but they wouldn’t stay out.

Fast forward to 2017, and the old soul of Harrowsmith is back. I didn’t know this until a few months ago, but the magazine I’ve loved more than any other in the world has been in print for a few years. This wouldn’t be noteworthy if Harrowsmith was just another country living magazine, but it’s not. The woman in charge now is more than committed to the original vision of James Lawrence. Her name is Yolanda Thornton and she’s poured everything she’s got into making Harrowsmith the publication it was in the good old days. The heart and soul of the old Harrowsmith is here again in a way that can only happen when a passionate person grabs the helm. No big corporation here. 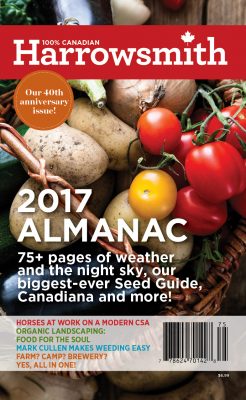 I’m so impressed with all this that I’ve volunteered to take on the role of home and property editor for the new Harrowsmith. My first article will appear in the next issue. And it’s a physical magazine, so you can save copies under your bed just like I used to! Imagine that. The magazine I loved as a teenager is now something I get to contribute to. I can hardly believe it.

Would you join me in breathing new life into this venerable publication? If you’re interested in sustainable, rural living, like I am, you won’t be disappointed. Visit harrowsmithmag.com to see for yourself.