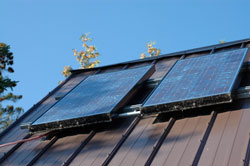 Photovoltaic solar panels are one of the most fascinating developments in the world of energy because they seem so much like magic. A flat, grey panel sits in the sun and makes electricity. No noise, no exhaust, no moving parts. A growing number of Canadians are wondering how this technology might be incorporated into their homes, and the information you’ll find here is the first step towards an answer.

Sunlight shines on photovoltaic (PV) panels and the light energy is converted to electricity. That’s step one of the process. This electricity is typically stored for future use in a battery. Storage is step two. You can also convert PV electricity into the form that typically comes out of a wall socket. That’s optional conversion step number three.

All photovoltaic panels are rated by how much power flows from them while the sun shines, expressed in watts (W). A panel putting out 500 W, for instance, can power up to five 100 W light bulbs at one time. Panels that generate 1000 watts of power are making one kilowatt. 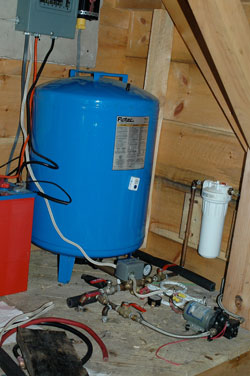 The electricity that comes directly from PV panels is called direct current (DC). This is also the kind of energy put out by every battery in the world. The term DC refers to the fact that this electricity flows in one direction only, across the positive and negative poles of a battery or pair of wires. Photovoltaic panels only create direct current, and though this kind of electricity certainly has its uses, it’s not the kind of power that most electrical appliances are designed to accept. Typical electrical devices are made to use something called alternating current (AC). The 120 volt AC power that comes out of wall outlets across North America oscillates back and forth from positive to negative polarity 60 times each second. With this basic information in hand, you have what you need to understand the three main photovoltaic options.

These are the fundamental concepts that apply to the world of photovoltaics, regardless of the state of the technology. At this stage, the best way for most people to make PV part of their lives does not necessarily involve choosing and installing each component from scratch. Unless you’re heavily into tinkering, it’s best for you to consider a pre-packaged PV system where all components are engineered to work together. At least now you know the basics of the options that are available, and that’s a good thing. It’s only a matter of time before photovoltaics become mainstream.