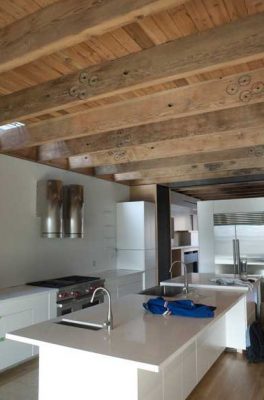 What details would you include in a home built to the highest environmental standards? The answer to this question is always changing, but one new Canadian home I know about could be the closest thing to state of the art. It’s designed by visionary architect Bill Dewsen and incorporates more than four dozen technical features that work together to reduce overall environmental impact, with one particular detail poised to make a difference in a growing number of Canadian homes. The owners have asked for privacy as far as location of their house is concerned, but they have been open about the details that make their place green, including one in particular that we’re seeing on more and more houses. 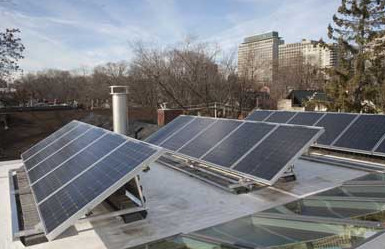 Photovoltaics (PV) is the direct conversion of light to electricity, and though it’s an effect first recognized by French physicist Edmund Bequerel in 1839, it’s just now emerging as a mainstream option for power generation. More than two dozen PV panels on the roof of this eco-home, generate 4.6 kW of electricity on a sunny day. That’s equal to the output of a medium-size gasoline generator, but without any mess, noise or pollution. Manufactured by Sanyo, these particular panels incorporate two design features that extract more power from a given area than most other panels. The array generates electricity both from the light hitting the top surface of the panels as well as on the underside, from reflected light coming off the bright coloured roof. Besides boosting the amount of electricity generated from a given space, two-sided generation makes it unnecessary to install complicated and expensive equipment used to constantly orient PV panels so they’re facing the sun.

The economics of photovoltaic electricity still require hefty government subsidies to make financial sense, but this is changing. The cost of PV power is on the decline, while the market price of conventionally-generated electricity is rising. The Sanyo PV cells used here are hybrids that combine two types of materials formerly used separately in older-style PV hardware. This leading technology converts anywhere from 15% to 20% of the solar energy hitting the panels directly into electricity, with no moving parts. 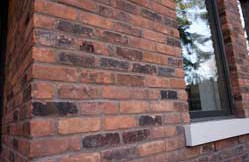 Photovoltaics isn’t the only thing that makes this home special. More than 80% of the demolition waste from the original house on the urban site was recycled, with only 10% going to landfill. Walls are insulated to R35 standards, and the geothermal heating and cooling system delivers 300% more energy than the electricity required to operate it. Exposed timbers are reclaimed Douglas Fir from a Canadian military hanger, with new wood certified by the Forest Stewardship Council. The reclaimed brick on the exterior of the home is sourced from a dismantled industrial warehouse, and hinged partition walls swivel open to boost natural ventilation during warm weather. LED strip lighting, drought-tolerant native landscape plants, water-permeable parking pads, continuous vertical drainage planes behind exterior wall surfaces and a bees wax finish applied to exposed steel beams and columns are just some of the features that make this home ultra-green.

In more than 20 years of writing about home construction, I’ve never seen the level of interest in green home design that’s cropping up all over the place right now. And even though much of this technology is currently more than most of us can afford, costs will drop. Leading edge technology is always pricey, but if it proves useful, prices come down. Big, looming realities are catching up with us, making change even more necessary. And though outdated Canadian attitudes have been slower to change than in other parts of the world, houses like this one show we’re on our way.

This article originally appeared in HouseWorks on May 28, 2011.