In one year from now, the world of home building in Ontario will change dramatically. That’s the date when new building code legislation comes into effect, and though the intent is to greatly increase the energy efficiency of new homes, the actual outcome depends on your ability as a new home buyer to ask about and respond to an obscure but crucial technical issue. 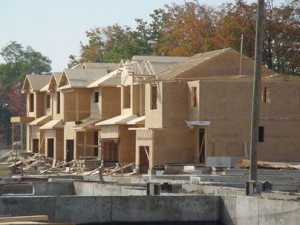 Dubbed E80, the new building code requirements rate homes on the same sort of broad EnerGuide scale that’s now applied to appliances and electronics. That’s where the “E” in the name comes from. The 80 refers to a percentage scale where 100 describes a home that produces as much energy as it consumes. This is called a zero energy home in the business, and though it might seem technically impossible, it’s actually entirely achievable. Zero energy new homes have been built and zero energy is the ultimate goal that our government is leading the industry towards. E80 was intended to be a big interim step in this direction, with E80 homes consuming about 30% less energy than new houses built to current building code standards. But whether or not the new home you buy next year delivers this level of performance isn’t guaranteed. That’s because there will be two kinds of E80 homes on the market, and the difference could have a big impact on the energy bills you pay.

When E80 was originally proposed, it included a requirement that each and every new home be physically tested for air leakage. The loss of heated and cooled air is an important part of how much energy a building consumes for heating and cooling, and air leakage is tested by temporarily pressurizing the interior space using an electric blower installed over an exterior door. This loss of pressurized air is measured, and the number used to determine how many complete air changes per hour occur out of the entire home.

The original E80 proposal was based on a figure of 3.1 air changes per hour as actually measured with a blower door test, but industry lobbying led to a concession that may be quite significant. There are now two ways new homes can be awarded an E80 rating – actual performance testing as completed on each and every home, and a construction recipe approach that replaces actual testing with a recipe list of building features that should, in theory, yield E80 results. This is called the prescriptive approach, and the thing that makes me concerned is the fact that these homes will be assumed to have a 3.1 ACH performance even without a blower door test.

Why I am Concerned about Prescriptive Testing?

Besides being crucial for energy performance, air leakage varies tremendously depending on how carefully a home was built. Nowhere is this more clearly proven than in testing completed by ecoEnergy, a branch of the federal government. According to a study involving more than 8000 new homes built over the last decade, more than half failed to achieve the necessary 3.1 ACH performance. Only 0.2% performed better than this. Almost 700 homes scored 6.0 ACH or higher. Of the test homes built in 2009, the best scored just over 1 ACH, and the worst was over 20 ACH.

Performance vs Prescriptive: Their Effects on New Home Buying

So what does all this potential variation mean if you’re planning to buy a new home next year? First, recognize that performance-tested E80 homes may be significantly better than prescriptive E80 homes. Without physical testing, how will you know? And second, while it remains to be seen how many builders will opt for either the prescriptive or performance path, any home can be assessed for air leakage with a blower door test. If you’ve got your eye on an E80 home built to prescriptive standards, you can always request that it be tested for air leakage before committing to buy. Cost for testing is about $300 and will show you exactly what you’re getting.

Although stud frame walls have long been the mainstay of new home construction, it’s technically challenging to build a wood frame that holds air as well as the tightening code standards demand. Besides offering a chance for Canadians to own more efficient homes, E80 will also boost alternatives to stud frame construction that make it easier to build tight.

While there’s always lots of things to complain about with government, I’ve got to say how impressed I am with the kind of leadership behind the E80 initiative. Consumers didn’t know enough to ask for E80, and the home building industry probably wasn’t crazy about building to higher standards. Despite the fact that no political hay was to be made from E80 – and despite the less-than-perfect state of the upcoming E80 code standards – we’re still moving forward in a way that matters. And if that’s not the definition of good leadership, what is?