How energy efficient are new Canadian houses? That’s not as easy a question to answer as you might think, and something called EnerGuide for New Houses is both part of the solution and part of the problem. 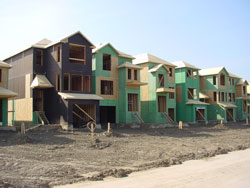 EnerGuide numbers are now being used to drive building code changes in a growing number of Canadian provinces, with these numbers used to rate the efficiency of houses. Each new home carries a rating, just like new fridges, stoves and dryers do. Leaky old houses built during the first half of the 20th century would score below 45 or 50 on the EnerGuide scale if they had it back then. Most homes built during the last decade typically score somewhere in the high 60s or low 70s. An energy neutral home – one that consumes no net purchased energy at all – has a rating of E100. Sound impossible? Not so. Warm, comfortable, healthful houses that use virtually no outside energy inputs are being built in Canada right now.

Building code requirements coming into effect across Canada are raising the efficiency bar, requiring new homes to achieve at least an E80 rating. The big question is will your new house hit that mark? Maybe yes, maybe no.

Depending on your province, contractors can have each of their houses tested to see if they meet standards, or they can build according to a construction recipe that should, in theory, result in a house that meets E80 standards. Trouble is, actual performance measurements are not required with this second approach, so homeowners never really know if the “recipe” turned out. Depending on the workmanship of the crews that framed and insulated the house, your new place may meet E80 performance standards, or it may fall far short of it. And this is precisely where EnerGuide numbers can be misleading.

An E80 home uses 50% less energy than an E67 home (notice the 13 unit difference), while an E86 structure uses 50% less than that same E80 home (with just a 6 unit difference). The farther up the EnerGuide scale you go, the bigger difference the space between numbers represents. A British Columbia study measuring the actual performance of E80 houses built to a testless recipe shows what this means in reality. These houses typically delivered only E76 or E77 performance, translating to 29% greater energy consumption than a true E80 home.

The main issue boils down to air leakage. The leakier a structure is, the lower EnerGuide rating it earns. Building by recipe is called the “prescriptive” approach, and there are risks, especially when it’s applied to traditional stud frame construction. One small, hidden flaw in the vapour barrier somewhere can easily double the rate of air leakage. The resulting drop in the EnerGuide rating signifies a problem that could cost you hundreds of extra heating dollars each year.

Building code changes based on E80 performance ratings are only the beginning of rising standards the government is imposing on the building industry. No one knows for sure when the next round of tighter requirements will kick in, but when they do they may drive the venerated wood frame stud wall construction methods to complete extinction. Even now, conventional 2×6 construction can’t meet code in some parts of Canada. Additional insulation is required on the outside face of these walls. Completely different wall and roof building technologies that have remained obscure for decades now make a lot more sense. Look for fundamental changes in the way houses are built, and big reductions in the cost of keeping these structures comfortable year round.

Sooner or later, reality always comes home to roost. E80 is only the beginning of the effects that environmental sensibilities are having on the building business. We’ve certainly got some interesting times ahead.