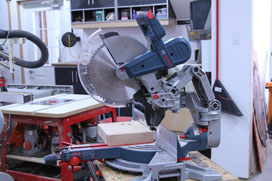 Sliding compound mitre saws are a mainstay of woodworking shops, home renovations and construction sites, but all models until now also require a lot of room behind the saw for the rails that the motor and blade assembly slide on. Bosch has changed all this with the GCM12SD. It’s not too much to say this one tool is poised to revolutionize the sliding compound category because it makes all other models seem second-rate by comparison.

Instead of long, cumbersome sliding rails, the GCM12SD uses two beefy articulated arms. As the motor and saw blade moves forwards and backwards during use, these arms never extend beyond the back of the saw. This articulated design lets you use the tool in a much smaller space. The shorter design also makes it easier to rig up dust collection if you’re using the saw in a workshop situation. I’ve been testing the GCM12SD in my shop since late 2010, and it’s the best sliding compound mitre saw I’ve ever used so far. Current Canadian price for one is around $799.