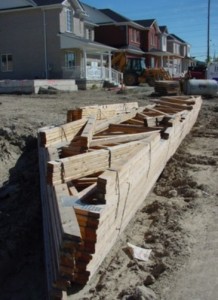 If you didn’t know better, you’d swear that Canadian homebuilding sites have been invaded by armies of highly skilled roof framers. Interesting, complicated roofs are popping up in new subdivisions all over the place, and the source of the striking beauty may surprise you. More and more builders are including stunning roof designs in their projects, yet they’re doing it within ordinary building budgets employing carpenters with ordinary skills. And the key behind all this is computers. By harnessing information technology to design, cut and assemble factory-made roof trusses, the housing industry now offers both stunning, intricate roof lines and affordable home ownership all at the same time. Where the term truss roof used to be synonymous with plain, low-slope, ho-hum houses, computer-designed trusses now offer the low-cost possibility of steeper roof pitches, space-enhancing dormers, vaulted ceilings and bonus-rooms over garages in areas that would otherwise be clogged with 2x webbing and metal nail plates.

Modern roof trusses are typically triangular networks of 2×4 and 2×6 lumber, whether they’re the product of computer-assisted manufacturing systems or not. Truss roofs also consume less wood than rafter-framed equivalents because they rely on brains instead of brawn for strength. Narrow lumber coming from smaller, younger trees is all that’s required to make them. Comparable rafter-framed roofs require 8 to 12-inch wide lumber that only come from dwindling, old-growth forests. Besides saving money, truss roofs also preserve stands of trees that may be more financially valuable left standing as eco-tourist attractions.

Residential truss roof construction originated in Florida and first came to Canada in the late 1950s. At that time, and for three decades afterwards, trusses were built following pencil-and-paper drawings, with wood cut using various sorts of power saws. It wasn’t until the mid-1960s that metal gang-nail plates took over from the hand-applied plywood gussets used to secure truss joints traditionally. The only electronic automation to help speed the design process during that era was a $1000 hand-held specialty calculator that appeared in the business during the late 1970s. You’d input figures for stick span and slope into the machine, then a paper print-out showing angles for a basic, simple truss was generated. Raw numbers still had to be transferred to the drafting board by hand.

Then, in the 1980s, Sun Microsystems offered the world’s first computer system capable of digitizing the design process in many industries, including the truss business. Though primitive by today’s standards (it only had a 40 MB hard-drive and a $10,000+ price tag), this digital tool marked the beginning of a revolution that now affects almost everything we buy and build, including homes.

When roof truss designers sit down in front of a computer screen these days, they start by thinking about form and shape. Typically, this means identifying the desired exterior outline of a roof, plus the interior shape of the ceiling beneath it. Once these initial parameters are chosen, computer-based information tools crunch out the size, shape, style and spacing of the trusses required to do the job. This sounds simple as you read it, but don’t be fooled. It’s not uncommon for just one complex truss-framed roof to require as many as 30 or 40 unique trusses to get the job done, with perhaps only three or four trusses in the whole roof being the same. And this is why complex truss roofs could never have been built economically until computer-directed design and manufacturing tools became available. This is where we stand today. In fact, variety in the truss business is so economical and easy to achieve that significant differences can be built into the roofs of all neighbouring houses in a subdivision, a feature that was prohibitively expensive just 10 years ago. Computers boost the variety that’s possible for anyone building new or involved in major renovations.

After truss details have been roughed-out by the designer, the role of computers doesn’t end. Programs are now so sophisticated that they can perform load tests on interconnected networks of virtual trusses as they exist on screen. These truss systems function together as one roof in this virtual world, just as they do in the physical one, straining under point loads as high as 20,000 lbs. thanks to simulations of digital snow and wind. Don’t trust computers to keep the roof from falling on your head? Don’t worry. Engineered results of computer testing are always verified and approved by an engineer and stamped as a final check before trusses are built in wood and shipped to building sites.

With truss designs complete, information is fed to a computer-controlled saw that cuts the dozens of required components automatically. As fast as a single worker feeds raw lumber into the saw, precut parts come out the other end where they’re stacked before assembly. In state of the art truss plants, a laser outline of each truss is projected onto an enormous assembly table to guide the placement of wood while computer-guided clamping blocks move into position and hydraulic equipment presses metal connecting plates over the joints. It’s slick, fast, accurate, economical and yields beautiful results.

Feel a little squeamish about building a steep truss roof 30-feet off the ground, even if the work does go quick? Trusses offer an advantage to the people putting up structures, too. Some builders take advantage of the self supporting qualities of trusses to assemble and sheath roofs at ground level, on first floor decks. A crane moves the assembled structure out of the way while the walls go up, then the roof is lifted and placed on top as a finished cap. In many cases it’s faster, safer and cheaper, even considering the cost of a crane.

From the homeowner’s perspective, modern truss roofs offer three practical advantages. Besides good looks that won’t go out of fashion, modern truss-based designs offer more open interior space in a home because they don’t depend on support from walls and beams to stay up. The engineered pattern of triangular components makes trusses self-supporting over surprisingly long spans. It’s entirely possible, for example, to build a roof over a 40-foot wide building without any interior posts or beams underneath, using only narrow, relatively-short pieces of lumber. And finally, modern truss roof construction yields more house for the dollar because of the inherent efficiencies in the construction process. Even a complicated roof on a three story house can be ready for sheathing a day or two after the truss truck rolls up.

On one hand, I have trouble giving myself complete permission to be excited about the revolution in truss roofs. After all, the trend works to displace some of the need for carpentry skills, inching the trade closer towards that of component assembly rather than a creative craft. And how can you get excited about the lowering of stakes like that in any trade? But then I think of all those plain-roofed homes that were the bread and butter of the homebuilding business back in the 1970s. Compare them to what’s going up now, even in entry-level developments, and you’ll see why it’s hard to resist the excitement. The great roofs that are showing up everywhere have done more to boost the curb appeal of new homes than any other single refinement in the business. And if that’s also happening at a cost that’s reasonable enough for many home buyers to afford, who can argue?

When engineers sit down to design a roof truss, wood quality is something they have to be able to count on. Without some assurance that truss lumber will be consistent and flawless, what good is truss design when, say, a bad knot or some wavy grain can blow the whole thing out of the water? And since conventional lumber grading procedures couldn’t be counted upon to supply the level of lumber consistency required, something else was needed.

That’s why the lumber industry developed a system of grading assessment call MSR — machine stress-rated lumber. Equipment measures the stiffness and elasticity of each and every piece of candidate lumber and assigns a passing or failing result. Although the only way to fully assess the strength of a piece of wood is to actually break it, MSR stiffness testing is a trustworthy, non-destructive alternative, especially when coupled with conservative design safety allowances. Even lumber plants that determine MSR standards are regularly assessed themselves for machine calibrations, plant use practices, and maintenance of detailed test records as part of the process.

MSR lumber generally carries two measured values on its grade stamp: strength (Fb) and stiffness (E). These numbers side-step most important differences that exist between species, simplifying the truss construction process and any other part of the building trades where consistent, reliable wood strength is critical.

Sidebar: Floors Are Changing, Too

The same truss revolution that’s enhancing roof lines is also affecting floor framing. It’s now routine to design 24-inch deep floor trusses that can span 40-feet without support. Besides more usable interior spaces, trusses are easier to install subflooring onto because of the wider nailing surfaces presented by the top edge of the floor truss web. Freedom from the need for roof support is optimized when floor frames are also entirely self-supporting.