Food is only one of the things produced in the countryside, and it may not even be the most valuable. More than the usual number of innovative, risk-taking, hard-working people also owe commendable character traits to a farm upbringing, and something called the Big Bed is a classic example. It’s the handiest DIY accessory I’ve seen for extending the length of lumber, pipe, ladders, boats and building materials you can safely carry in your pick-up truck. But more than this, the Big Bed is a classic example of what springs from the tenacious, innovative practicality that comes from being raised on a farm where getting impressive amounts of work done quickly, smart and well is part of everyday life.

Meet the Men Behind Big Bed 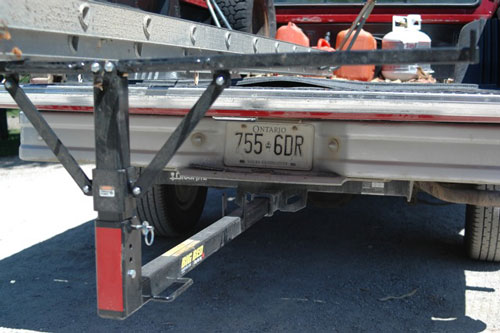 Mike Segeren, Don Segeren and Jason Hawkins are the three country boys behind the Big Bed, and their story reads like a textbook lesson in tenacity and hard work. All three are married, between them they have kids, farms, off-farm work, contracting projects and all the other responsibilities of active, productive guys who live by entrepreneurial wits alone.

Their Big Bed is a folding metal extension that plugs into any standard 2-inch trailer hitch receiver. Wings unfold and lock, creating a 49-inch wide support arm that sits about two feet back from the edge of the open tailgate. With the Big Bed in place it’s possible to safely carry loads twice as long as the 8-foot bed of a standard pick-up truck, supporting up to 400 lbs. of weight as it does.

Back in 2006, Jason welded up a crude, T-shaped metal support to help transport long lumber for building projects, later refining the design into a folding version that always got lots of attention wherever he went. That positive experience prompted the three lifelong friends to bring the product to market under the company name Seg-Ins Inc. (a word combination of their last names). After the sorts of trials that kill many new businesses – money shortages, world-wide economic depression, dashed hopes for several promising distribution options, the sudden death of their first fabrication contractor, a bad batch of paint on their first 100 units and the ever-present shortage of time – the farm boy tenacity of Mike, Don and Jason is now paying off.

In January 2010, Big Bed earned full patent protection. The product is now mature and Jason, Mike and Don are selling Big Beds online. I began testing a unit in the spring of 2010, but before actually trying it for myself, I needed to add an accessory to my truck.

Although many new trucks have a square hitch receiver at the back, mine didn’t. It’s a metal recess just below the rear bumper with a hollow 2-inch by 2-inch square hole made to accept various hitches and attachments, including the Big Bed. Although installing a square hitch receiver looked daunting, the work turned out to be an easy, 30-minute DIY driveway job. As I discovered, receivers are custom-made for various trucks, and simply bolt to the underside of the frame. Clamp the receiver to the frame, then use the factory-drilled bolt holes to guide the location of holes you need to drill in the frame. My receiver required 1/2-inch diameter holes which proved easy to bore with a good bit and an 18-volt cordless drill, even through the 1/4-inch thick steel of my truck frame.

After living with the Big Bed for more than a year, I can say that it’s every bit as useful as it looks. It takes less than 30 seconds to slip the end of the unit into the square receiver hitch and unfold the wings. The outfit provides rock-solid support for anything that extends beyond the tailgate, eliminating the need for a trailer or the kind of weights typically used to counterbalance long loads. Removal is just as fast when you’re done hauling. The unit folds into a 5-inch wide, 52-inch long, 38 lbs. example of the kind of innovation that often comes out of the country.