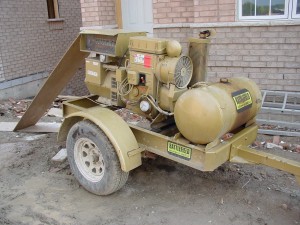 The reliability of our electricity supply isn’t what it used to be. Utility companies have cut back on line maintenance and every summer electricity demand across the continent almost exceeds supply. Damaging weather events happen more often these days, and interconnected distribution systems are vulnerable in ways that make power failures ripple outwards like falling dominoes. None of this is news, but what you might not realize is how far small-scale generator technology has advanced. It’s now more practical than ever for individual Canadian householders to meet their own emergency power needs, and success begins with understanding your options.

Where I live we get at least three or four extended power outages each year. That’s one reason I invested in my first generator back in 1988. Building and renovating beyond the grid is another reason why generators are a part of my life. Considering a generator for your own place? You need to start by thinking about three key issues. Size, portability and “power quality” are the main issues to consider when you’re in the market for a generator, and you need to start with a calculator in hand.

Watts are the universal yardstick of power consumption in the electrical world, and watts are how generator sizes are rated. Add up the wattage of all the things you want to use during a power failure, add an allowance for extra capacity, and that’s the size of generator you need. Sounds simple enough, but there are complications.

First of all, not all electrical items have wattage ratings stamped on them. Voltage and amperage numbers, however, must be shown by law on electrical items, and that’s a good thing. Simply multiply voltage and amperage specs to get a wattage consumption figure. Next, you need to realize that some appliances draw a lot more power during start up than they do while running.

Take a look at “Watt’s What” below for a sampling of electrical items and their wattage demands. Those with what’s called an “inductive” load include motors that draw a substantial spike of start-up current. Your generator needs to be sized to accommodate this extra current draw for at least some of the inductive items on your list. Not all will be starting up at once, of course, so you’ll need to use some judgement as you tally your figures.

Bottom line: Most people find a 3500 watt generator sufficient for bare-bones basic household needs; a 5000 to 6000 watt model offers more options. Completely powering a modern home during an extended outage can easily require 15,000 watts or more (even without considering any electrical heating needs ) and while this used to be beyond the scope of what’s reasonable for most people, not so now. Prices of large, stationary back-up generators have dropped to the point where a 14,000 watt stationary model now sells for about $4000; a 20,000 watt model just over $5000. These units can’t be moved around, but they do offer the lowest cost-per-watt figures of all generators, along with quiet operation, automatic switching and a quality of power output that’s worth taking a closer look at.

Power quality isn’t an obvious issue when selecting a generator, but it should be. In fact, it’s absolutely crucial if you’re buying a generator to protect you during an extended outage. The kind of electrical items we all have in our homes these days are the reason why.

Although standard generators put out alternating current (AC) power at a specific voltage (120 volts, 240 volts or both), the electricity they deliver is substantially different than what comes out of your household wall socket. True AC power involves a rapid and smooth rising and falling of voltage levels at a certain frequency. This is why it’s called “alternating” current. If you were to analyze this power on the screen of an oscilloscope, it would look like a smooth and consistent sine-wave. Conventional generators, on the other hand, only approximate true sine wave output in a way that’s coarse and blocky. Seen on a screen, this wave pattern is square, not curved, and may include potentially damaging voltage spikes. All of this is perfectly acceptable for powering water heaters, large electric motors, cooking appliances, water pumps, etc. They operate undamaged with the so-called “dirty” power produced by many generators, though that’s definitely not true when it comes to sensitive electronics. These devices need more refinement. 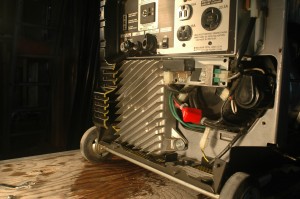 These are often called “inverters”, and though they do cost more money than bargain-basement generators, they offer another advantage in addition to clean power. Inverters are often equipped with a variable load feature that controls motor speed depending on the electrical load demanded. If you’re demanding only 10% of the inverter’s capacity, engine speed will run just slightly more than an idle; 50% demanded current draw in the motor will run half speed. Full demand, full engine speed. This translates into much quieter operation and greatly reduced fuel consumption.

Maintaining heat output during a winter power outage is one of the most crucial roles a generator plays for many of us, but making this happen is not straightforward. If you heat with electricity, then don’t count on a generator to keep you warm. The size of generator required to electrically he even a small building is often too large to be practical. Some kind of fuel burning backup system makes more sense for electrically-heated buildings.

Even if you have a gas or oil furnace, you’ll still need to supply at least a little bit of electricity to make it work. Trouble is, how do you feed generator power to a furnace that’s hardwired into your panel? Same problem goes for a water well pump, overhead lighting or built in cooking equipment, for that matter. You can’t plug any of these things into an extension cord.

The solution involves connecting your generator directly into the electrical system of your home, energizing all the wires installed in walls and ceilings. But to make this happen you need specialized switching gear wired into the incoming cables feeding your electrical panel. Typically called a “transfer switch”, this equipment allows either your generator to be powering your home, or the grid to be powering your home, but never both at the same time. This protects electrical workers who would be endangered by generator power back-fed through overhead lines, while also protecting your own household wiring and generator should grid power come back on unexpectedly.

Generators are better than ever, so it’s easy to like them. Choose one well and you might even find yourself looking forward to the next power failure. 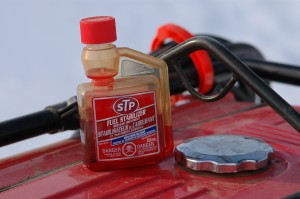 Neither gasoline nor diesel fuel stays good forever, and that matters when it comes to keeping your generator running smoothly. There are two strategies you need to follow. First, use and replace stored fuels with every new season – four times a year. Here at my place I keep four or five 20 L gas cans full of all times, then use them to fill up my vehicles when it’s time to refill the cans with fresh fuel. Gasoline, especially, is formulated to be more or less volatile depending on the season. Summer gas won’t burn well in winter, and winter gas doesn’t perform well in summer. Even with a program of fuel rotation, be sure to add a preservative liquid to your fuel reserves and to the tank of your generator. Allow this treated gas to run through the carburetor before shutting the generator down, to ensure easy starting later on. Natural gas or propane fired generators have no fuel storage issues since these fuel products don’t deteriorate with time.

The first thing you’ll notice when shopping for a generator is the widely differing price levels. You can pay less than $2000 for a bargain-basement 5000 watt model or more than $4000 for the same size portable generator from a high-end manufacturer. The difference is mostly about efficiency, power quality and noise output – a surprisingly important issue when you’re out of power for more than a day or two. Inexpensive portable generators are substantially louder and they can burn more than twice as much fuel as more refined models. The cheapest generators also can’t usually be used to safely power sensitive electronics.

Add up the wattages to determine the size of back-up generator you need. Use peak watt specs for items that draw a surge of start-up current. Also, count on only 80% of a generator’s rated output being available continuously.