UPDATED 28Aug2020 + video below: Spade bits are one of my favourites for boring large holes in wood, and they’re useful in ways that other bits aren’t. And though every hardware store in the civilized world sells spade bits, I find that few people appreciate their full value. The ability to resharpen spade bits easily with a file or bench grinder is one example of what I mean (more on this later). You can see my collection of spade bits below. 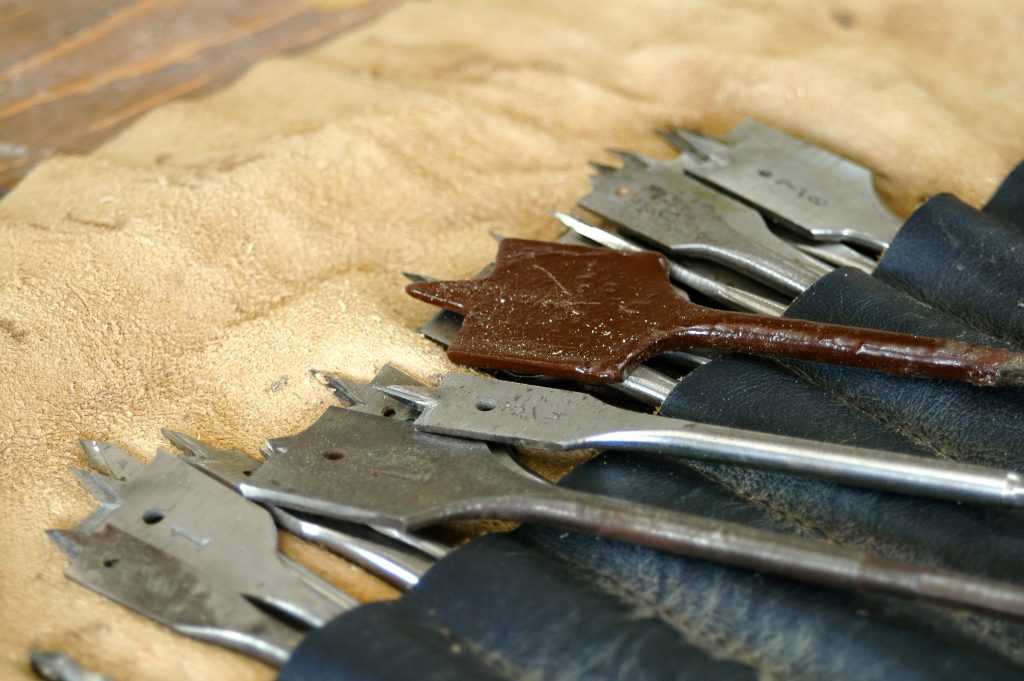 I keep my collection of spade bits in a leather pouch I made. The brown one in the centre is the bit I use to mix paint. Put the bit in a drill, then stir with power.

The business end of spade bits are flat, with two sharp edges that flank a central spur. Spade bits get dull when those sharp edges lose their crispness, and a dozen strokes with a flat file or a couple of seconds of contact against a spinning bench grinder is all it takes to restore all but the most mangled bits. No need to worry about carefully balancing each side of a spade bit. Since they spin so slowly in a drill, they don’t need to be all that balanced. Just do it by eye. Later in the article I’ll show a video about how I sharpen spade bits. 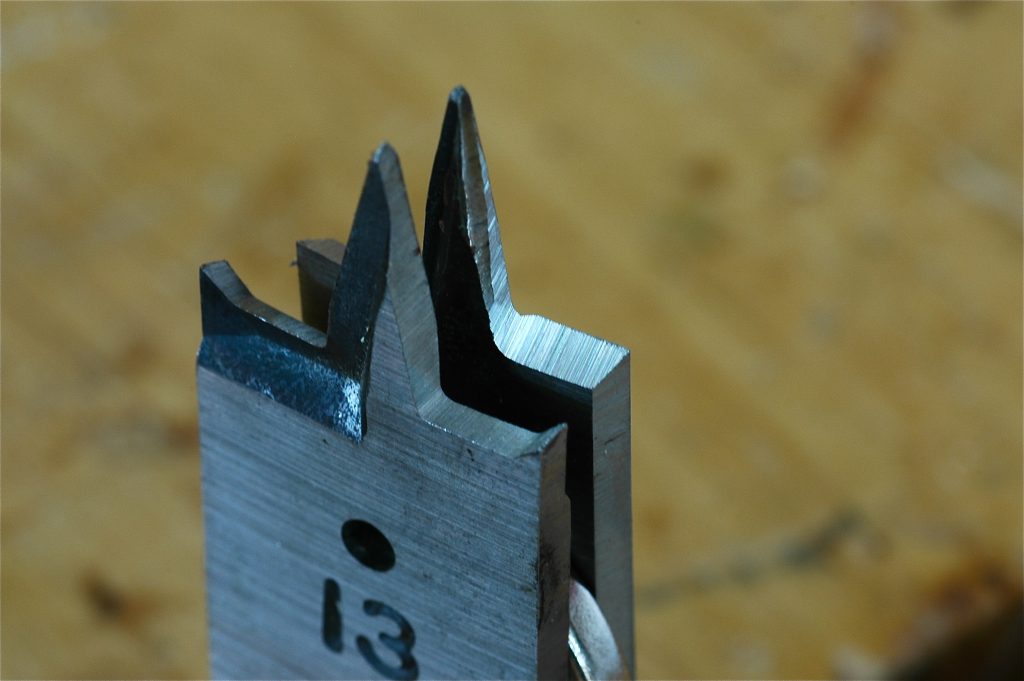 The shop-sharpened bit (background) is just as effective as the factory-fresh bit (foreground). Spade bits can be resharpened and reshaped many times in the home workshop.

Spade bits are inexpensive enough that they can also be modified for one-of-a-kind use. By grinding the sides of the bit evenly, for instance, it’s easy to make a spade bit smaller to create a custom-sized hole. Grind a little metal off each side, bore a test hole, then grind again if necessary. This technique is also useful for creating holes that are just right to accept tapered wooden plugs for covering screw heads. Ready-made Shaker pegs for coat racks also come from the factory with tapered tenons on the ends. By grinding the edges of a spade bit on an angle, you can create a correspondingly tapered hole that yields a much stronger connection.

Whatever your intentions, don’t let spade bits get hot while sharpening. It’ll change the consistency of the metal, preventing it from holding an edge as long as it should. Grind only for a second or two, then cool the bit in water before repeating.

Got a hole to drill in close quarters? Is a regular bit too long to let you get in with a drill? Cut the shank of a spade bit shorter so the drill can fit into the space. You’ll find the metal of a spade bit too hard to cut with a hacksaw, but you can grind through the shank with an angle grinder, then clean up the rough end before chucking the bit in a drill.

Spade bits can be used both in a drill press or a hand-held drill, and there are two ways to regulate hole depth when you’re drilling by hand. If you only need to ballpark hole depth, then wrap a piece of electrical or masking tape around the shank. As the tape starts to flap against the wood, you know you’ve bored far enough. It’s fast and easy. When precise hole depth is crucial, cut a length of 3/4” x 3/4” softwood, then bore a hole for the shank of the spade bit along its entire length. Slip this depth block over the spade bit, chuck the bit into your drill, then adjust bit position in the chuck so the block rubs against the workpiece and the drill chuck at the depth of hole you want.

Stain, urethane and paint all benefit from mixing before application. And while you could use a stick, power mixing with a cordless drill is much better. I reserve a retired old 1 1/2” diameter spade bit for mixing duty and it works perfectly. Reverse bit rotation a couple of times for best results.

Spade bits have a tarnished reputation with some woodworkers because they create rough holes when they’re dull. But once you learn how to keep them sharp, and learn how to modify them to customize hole size and shape, you’ll find no more grounds for spade bit prejudice.

Click below to watch a video I made back in 2010 on sharpening spade bits.

DISTILLED WATER: Is It Good For You To Drink?
Read Now

THREADING STEEL PIPE: Watch How We Do It In Our Shop
Read Now

How to Fix a Flat Bicycle Tire
Watch Now