A couple of autumns ago I climbed onto a small, deteriorating roof that I hadn’t walked on for 30 years. The activity got me thinking about how buildings can be anchors for our lives and guide posts for how we and the world have changed. That’s the roof below, half reshingled. 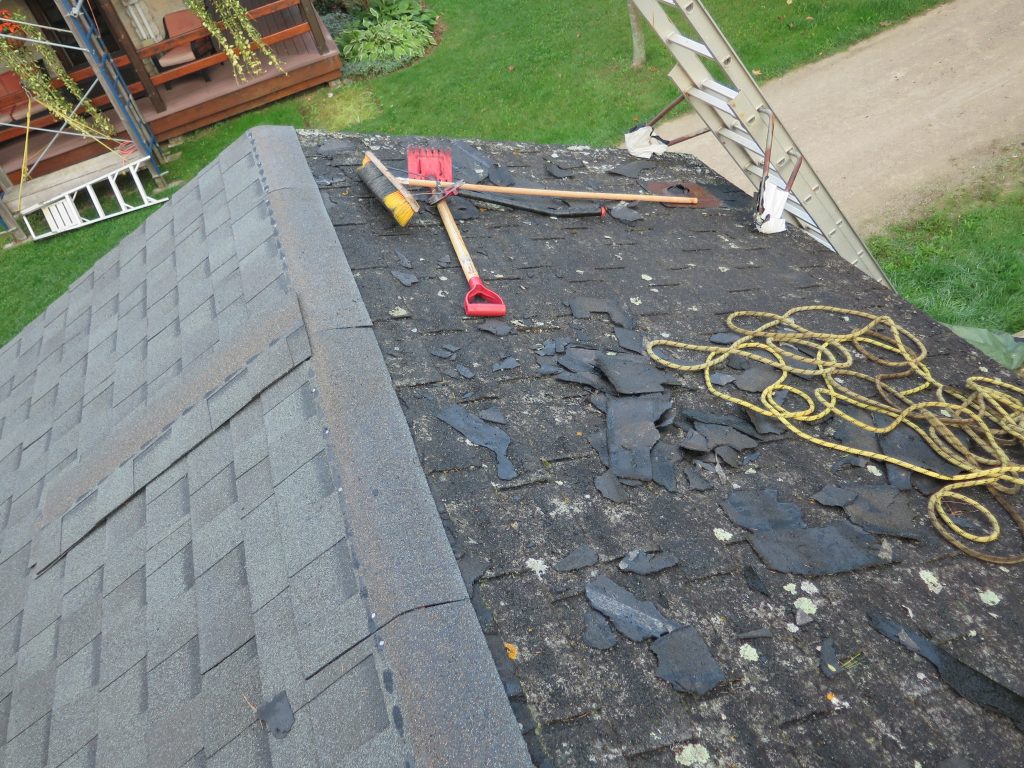 The old shingles on the right were rated for 10 years of life, but they worked well for a full 30 years. It’s amazing what you think about when you’re reshingling a roof you originally built three decades earlier.

I’d spent the spring and summer of 1986 living in a tent on the building-free rural island property where my wife and I would eventually build our house and life and family together. Long-term tent life sounds attractive, but only for those who’ve never done it. By the time I moved into the first structure I’d built in my life – a 10 x 20-foot shed – it was more welcoming and appreciated than the finest hotel could ever be. It’s amazing how hardship opens the heart to appreciate life’s small comforts so much more deeply. Pity the people who never experience at least a little hardship.

Shingling the shed roof back then was the step that turned the project from a simple frame into much-needed indoor space, and I didn’t have much money to spend on shingles.  Asphalt shingles came in two grades at the time: 10-year and 15-year.  I chose 10-year, but certainly got my money’s worth. I remember each bundle of shingles had a printed slogan: “Your first defence against the elements”. First defense, yes, and surprisingly loyal. Those brittle, curled 10-year shingles I peeled off last month, 30 years later, were still holding back the elements. 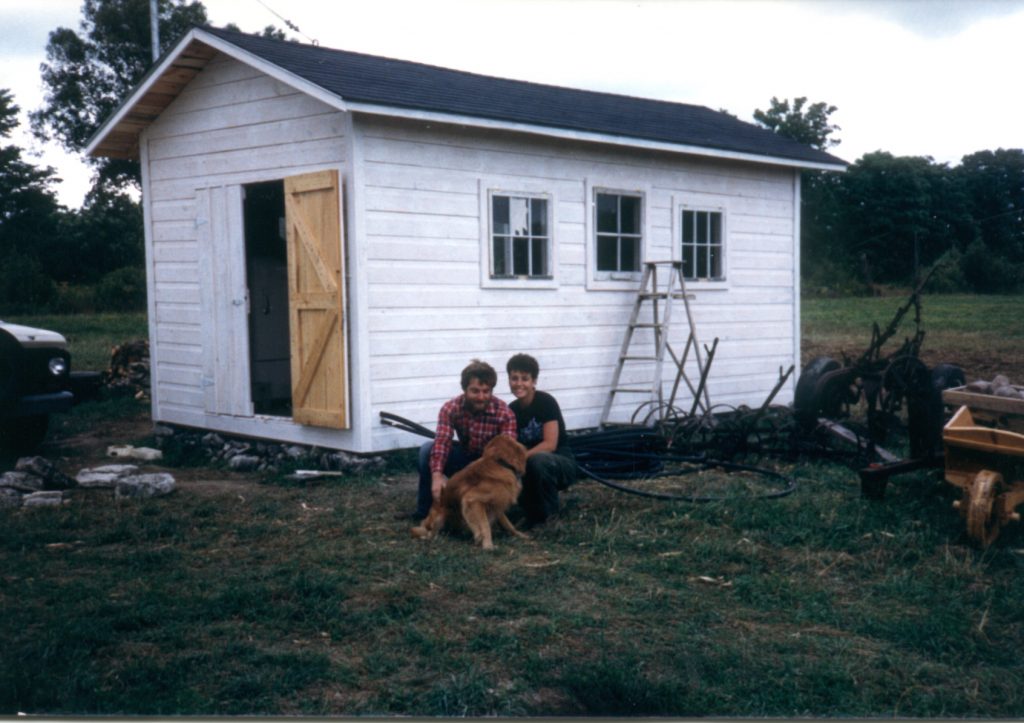 The original shed with its original roof back in 1986, with Mary and our dog King. This little building looks like shack, but when you’ve been living in a tent for months on end, it felt like a palace.

I didn’t know anything about shingling when it came time to put them on the shed the first time, never having done roofing or even seen it done close up. My new rural neighbour, an old farmer and carpenter, almost 80 years old named Ivan, came to help. His vigour for climbing ladders and swinging a hammer in the hot sun came from a lifetime spent earning a living for his family in a chronically depressed region of Canada. His vigour was yet another benefit of just the right amount of hardship endured.

Ivan was a man of few words, but he used those words to show me the simple secrets of the shingling trade. “Always install an overlapping double layer of shingles on the bottom course to make the joints waterproof”, he explained. “Use metal drip edge to protect the wood from water curling around the bottom of shingles”, Ivan advised. “Never grab more shingle nails than you can comfortably hold in your hand.”  The photo above shows the shed when it was new, just after Ivan helped me shingle it.

Fast-forward more than three decades and peeling back those brittle, curled shingles was like stepping into a time machine. Which nails did I drive? Which did Ivan drive? Simple tasks like stripping a roof alone, done quietly without ear buds filling the brain with distraction leaves the mind open to wondering things we usually don’t have time for. 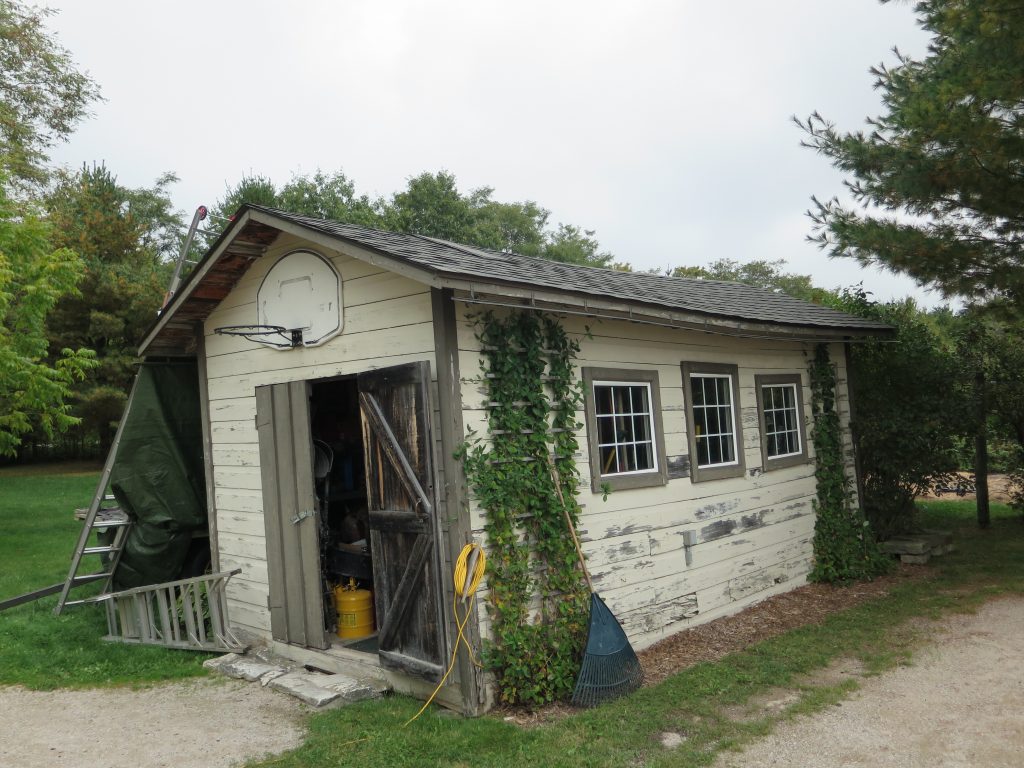 The old shed with its new roof. I’ve since restored the siding and built new doors. See some of the progress with the video below.

The most surprising part of reshingling that old shed roof was the way it compressed time for me. We humans really have no accurate sense of time past. Not so long ago, or so it seems, I was a 23-year old idealist shingling a small roof to call his own, wondering what my new life in the country would have in store. Today I’m a 53-year old grandfather twice over, nailing shingles onto a roof that’s now in the middle of a forest of trees I’d planted in an empty hay field. The stone house I built – just a dream at the time the shed was new – looms over me to the west.

Building the shed gave me the first shelter I’d ever earned on my own as a young man, but it gave me more than that. My sagging, simple, mistake-filled first attempt at building reminds me of things every time I see it. Time goes quickly; use it wisely. Skills are learned, they’re the fruits of struggle. And sometimes, if you’re lucky, cheap 10-year shingles last way longer than anyone would ever have guessed.

Watch the video below showing the cedar sidewall shingling make-over I did on the old shed.