Quietly, over the last 30 years, something great has been happening to wood screws. Several great things, actually. In this article I’ll introduce you to three specific wood screws I like, but to understand how great they are you need to go back and look at how pretty much all wood screws used to be. Something that happened to me a while back tells the story.

A friend of mine used to own a hardware store, and a while back he handed me a gift. At least it looked like a gift at the time. It was a box filled with several thousand brand new but very old wood screws, all in the original little cardboard boxes, all for free. The only hitch was their slot head. It was old stock (many decades old), and their design made them unsellable, as the guy explained. That’s why he gave them to me. The photo below shows the kind of old-style screw design I’m talking about. 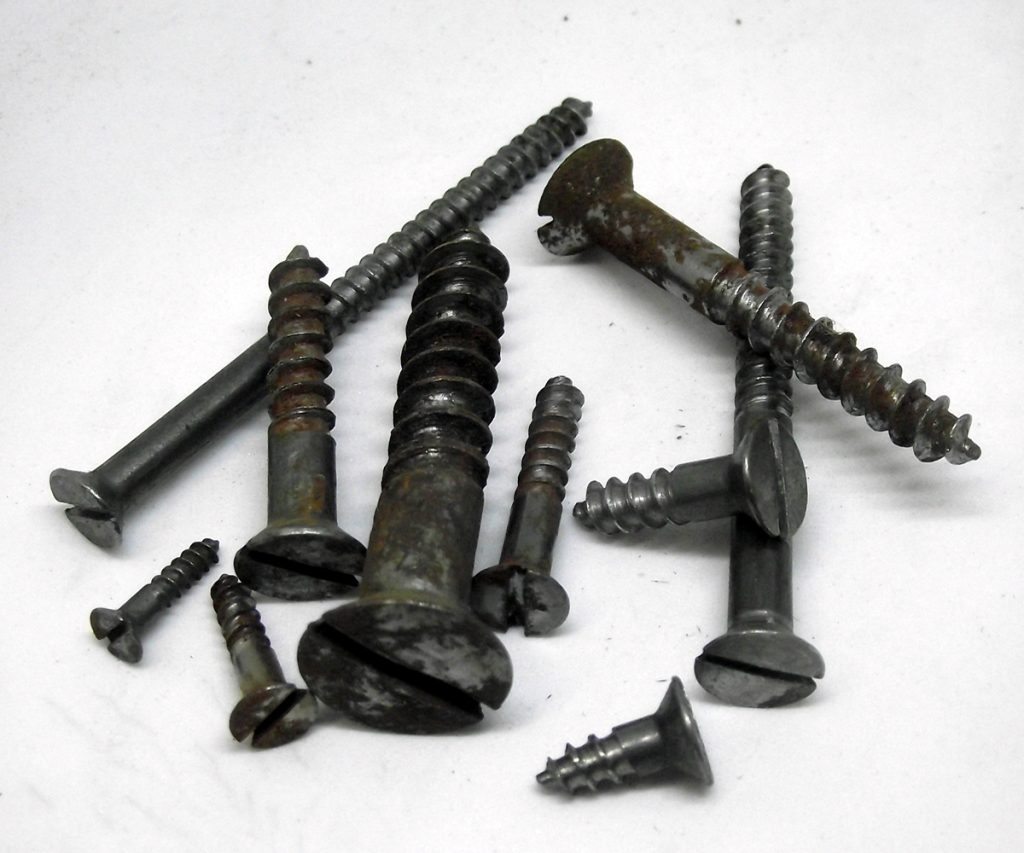 All this made for a pretty good day, but as I discovered, being brought up on Robertson wood screws (“square drive” for those of you in the US) it makes
the old slot-head versions seem like stale bread. Really stale. The screws were practically impossible to drive with a drill, and even hand driver tips would often slip out and damage the surrounding wood. There were other problems too, like a blunt, wide thread design that wouldn’t burrow its way into anything harder than styrofoam without a pilot hole. Screws like these have a place in restoration work, where you might want to replace missing screws in antiques with the same kind of thing. But in the end, after years of passing over the box of freebies in my shop and always reaching for more modern wood screws, the old-style screws went into the recycling bin, with the only hope that they’d someday be resurrected into something better. Thankfully, there are really great wood screws that are much, much better.

Why Today’s Screws Are Better

The ease and effectiveness of modern wood screws has gone way up since those old freebies were shipped from the factory, and this new breed of wood screws solves problems in new ways. There are three reasons that some of the latest wood screws really are the greatest:

While ordinary deck screws still remain an excellent, low-cost way to draw wood together and hold it that way, there are other things to look for when you want even better performance. One advancement is hot-dipped, zinc-based galvanized coatings. Nothing beats this treatment for corrosion resistance, except stainless steel — another new woodscrew choice that’s getting to be more and more common these days.

Serrated thread screws: Made by several manufacturers, the wavy or notched threads near the tip make all the difference on high-end deck screws. These cut wood fibers as the screw is driven, instead of just crushing the fibres out of the way. The result is an amazing ability to burrow into wood without the need for pilot holes. I’ve even driven #10 woodscrews of this kind directly into hard maple without a pilot hole, using just a hand driver. You’ve got to try it to believe. You can see a serrated screw shank below. Notice the wavy serrations that are especially visible just above the wood. 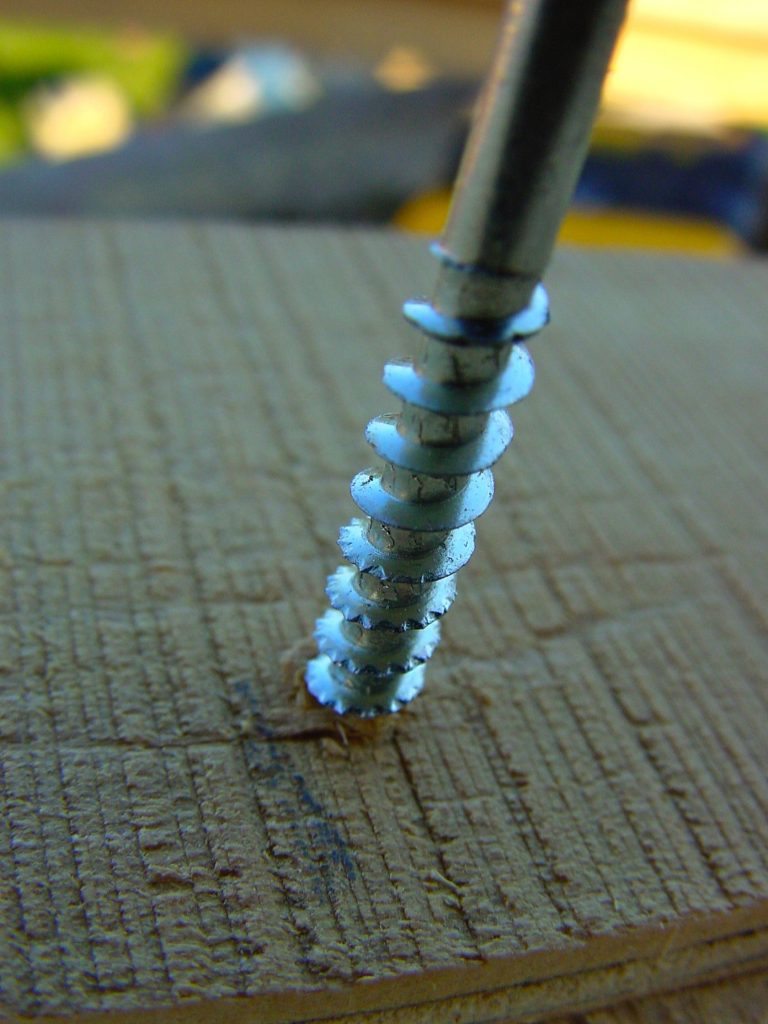 Structural Screws: These are bigger, better and stronger than deck screws by far, and I use them all the time when big holding power is needed. Larger shanks (about 1/4″ diameter) with deeper threads grip into wood with many times the traction of a deck screw, and the large head distributes that hold power over a bigger area. Those are Camo brand structural screws in the photo below. These used to be very hard to find, but now they’re much more common. These screws aren’t cheap, but when you need extra holding power, structural screws are definitely worth it. 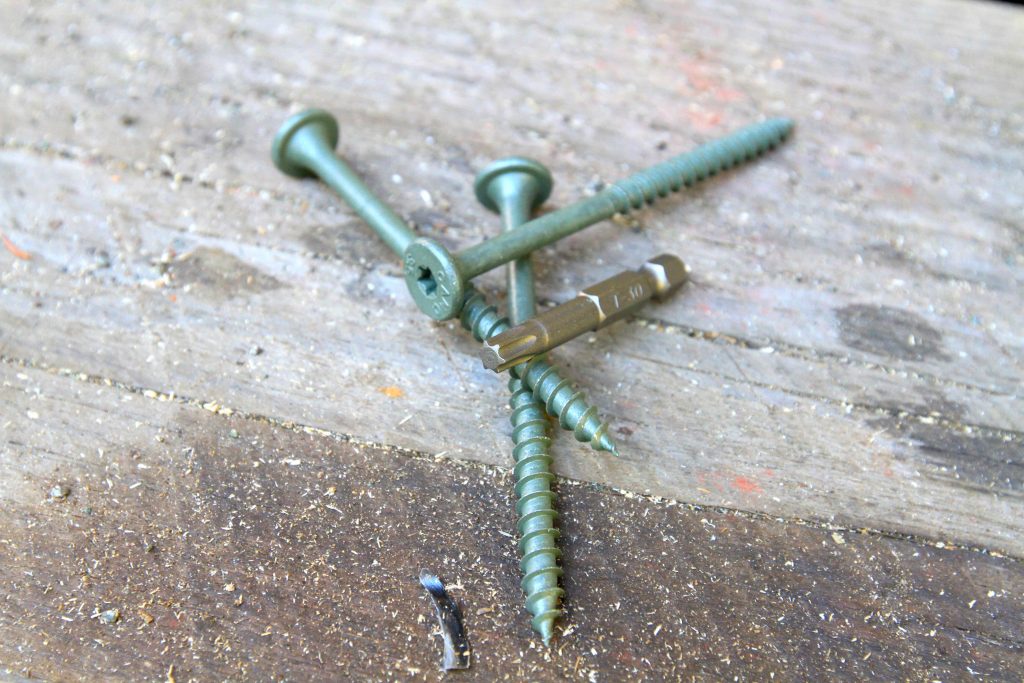 GRK Screws: This is a specific brand and similar in size to regular deck screws. They offer very impressive corrosion resistance (even though they’re not hot-dipped or stainless), plus a great head design that holds onto driver bits exceptionally well. The heads look good too, which matters on some projects. You can see an open package of GRK screws below in my shop. 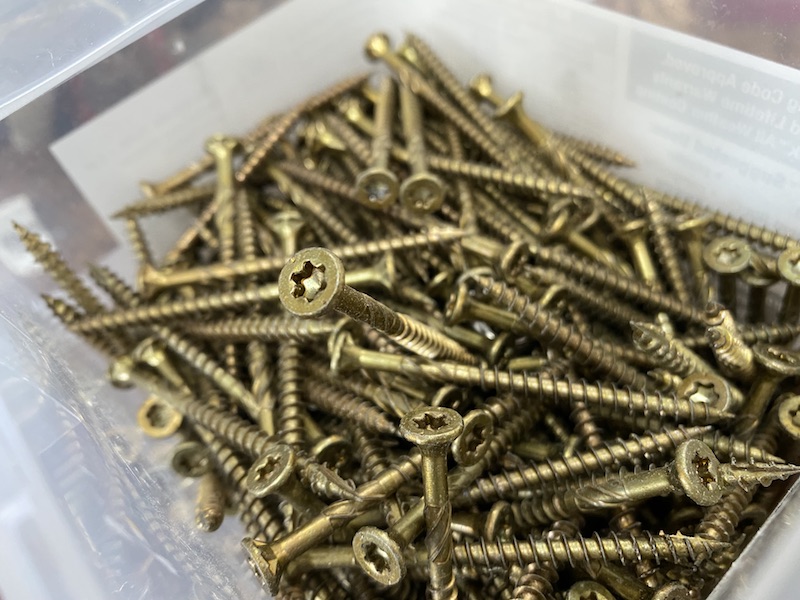 Colour-matched composite deck screws: These have small heads and not a ton of holding power, but they do a fabulous job for inconspicuously holding down composite deck boards. Made to match the colour of specific brands and types of composite deck lumber, I know from several projects that they do a super job. I’m a big fan of hidden fasteners for deck construction, but the outer edges of decks often need screws driven down from the face of the board. Same goes for where decks meet house walls. Colour-matched screws for composites do the best possible job in these locations. You can see some that I have on hand below. 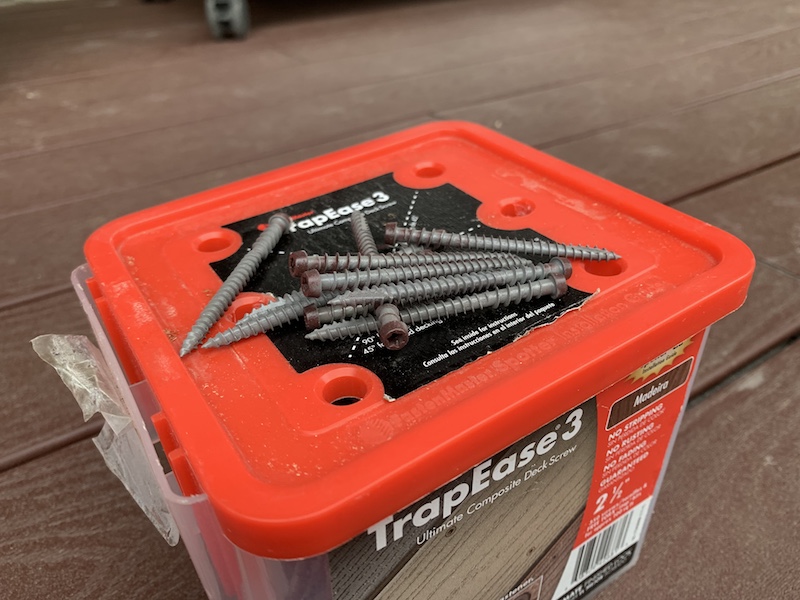 When cordless drills came on the scene they made power screw driving a practical reality. In fact, if it wasn’t for these tools, I doubt we’d have the explosion in wood screw quality we see today. Nevertheless, there’s always room for improvement, and that’s happening right now, with a type of power tool that sets a new standard as a screw driving engine. Called impact drivers, they’re better than anything else for sinking screws into wood fast and well. An impact driver is what you see below. 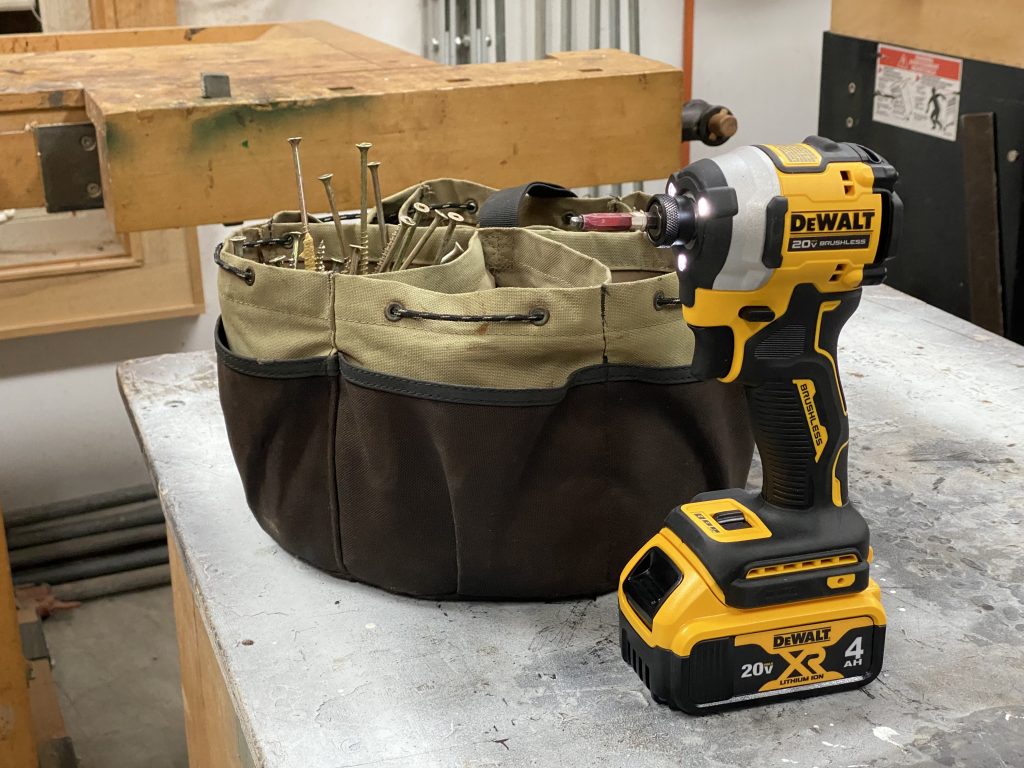 While regular corded and cordless drills drive screws with a constant, rotational motion in the same direction, impact drivers do it differently. Squeeze the variable speed trigger and an impact driver operates as any ordinary drill, propelling the screw into wood with ordinary rotation. But when the load increases, the tool starts to make a rapid-fire rat-tat-tat sound that indicates something useful. The tool is alternately driving, then not driving the screw in a kind of two-steps-forward-one-step-back pattern. This back-and-forth motion resets the screwdriver tip into the screw several times a second, an action that means the driver tip just keeps on driving, even when it’s worn and rounded. Impact drivers even offer redemption to those nasty reprobates, the foul-tempered, cam-out-prone Phillips screws often used to secure interior hardware.

Click below to watch a video I made back in 2009 about the advantages and internal workings of impact drivers. It’s an older video but everything still applies today.

I hope you’ll try some new wood screws and see for yourself. Please consider helping me cover the cost of creating and publishing content like this. Click the “buy me a coffee” button below for a safe, simple and fast way to make a contribution. Thank you very much for keeping this website going.