Plumbing in Canadian houses is pretty reliable, but if you live in an apartment building or condo, you probably know from experience that plumbing leaks are much more common. Water systems in high-rise structures operate differently than what’s installed in houses, and this difference leads to an annoying issue. However, I have an up-and-coming solution that I find interesting even though I’ve only ever spent short stints in a high-rise. 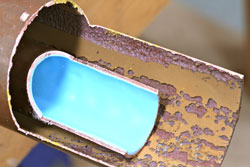 My parents live in a condo, and when I shower during longer visits with them, I’m impressed at how quickly the hot water starts flowing out of taps when you turn them on. That’s because hot water is constantly flowing through main pipes just behind the wall, and as pleasant as this is for those impatiently waiting to get clean, the constant circulation of water creates an erosion problem that’s becoming more and more common.

Constant flowing water eats copper pipes from the inside out, leading to pinhole leaks in areas with internal turbulence. It used to be that after 15- to 25-years of service, more than half of copper pipe wall thickness was gone. For a variety of reasons, dozens of Canadian high-rises have begun to spring hot water pipe leaks when they’re less than five years old. 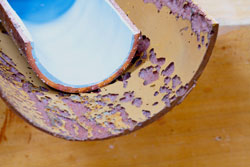 I’m always leery about the unwanted substances that water will pick up in contact with synthetics. For what it’s worth, epoxies used for pipe lining meet the world’s strictest safety testing. The fact that it’s only on the hot water side of systems offer another layer of safety, too. Health agencies everywhere always warn against cooking with or drinking water drawn from the hot side of any water system, regardless of what the pipes are made of.

Changes May Be Coming

For reasons I don’t fully understand, pinhole water leaks happen regularly even in single-family cold water supply pipes south of the border. Aggressive water chemistry and high chlorine levels may have something to do with this, and as the Canadian water treatment industry changes, we may be in for the same troubles here. So if pinhole pipe leaks ever happen at your home, you now know at least one non-disruptive way of fixing the problem.