If you’ve got grass to trim or brush to keep beaten back, today’s line trimmers and brush cutters make the job easier and more environmentally responsible than ever. I know because I’ve spent hundreds of hours using both kinds of tools over the last 15 years while also keeping tabs on how refinements to this technology are unfolding. The advancements are real, but they also present you with more choices when selecting specific models. That’s where this article can help. I’ll lead you through the pros and cons of various line trimmers, brush cutters and engine technologies so you can make an optimal purchasing choice in an arena where environmental concerns, rising user expectations and downward price pressures are all changing the face of the industry across North America. 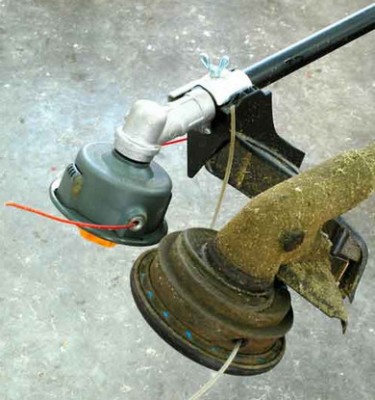 Line trimmers are lightweight outdoor power tools designed to cut grass next to decks, houses, trees and other yard obstacles. They use relatively fine plastic string (usually called “line”) to do the job. Typical engine size is in the 20cc to 30cc range. Brush cutters do the same work, but include a bigger engine (40cc to 50cc) and spin heavier line for cutting longer grass and small brush, as well as optional metal blades capable of sawing saplings up to 2” in diameter. The dividing line between line trimmers and brush cutters typically boils down to size and how the tools are held. Line trimmers are usually supported by your hands and arms alone, while brush cutters always come with a harness that supports the weight of the tool, with handlebars that allow it to be moved from side to side during use.

If you’ve got a typical suburban lawn, then a line trimmer is what you need and your purchasing decision boils down to three things: cheap or not cheap; straight shaft or curved shaft; two-stroke or four-stroke.

As many consumers vote for the lowest possible trimmer prices with their purchasing decisions, it pushes manufacturers in a race for the bottom while filling stores with trimmers that are too cheap to be good. That’s why the most important buying decision you can make is to spend more than the minimum amount of money. Expect to pay at least $200 to $300 for a reasonable, gas-powered trimmer. If you spend more than $300 you’ll get a noticeably more powerful and longer lasting tool.

Shaft style is another issue you need to consider. Straight shaft trimmers have a straight piece of metal connecting the motor and spinning trimmer head, and they typically perform better than curved-shaft models because they offer more efficient power transmission. Professionals usually favour straight shaft trimmers, and that says something.

Engine type is a relatively new issue when it comes to choosing a trimmer, and you’ve got two options. Two-stroke engines are the traditional choice for line trimmers – a mechanically simple approach that burns a mixture of gas and oil. Legislation to produce cleaner outdoor power products has prompted some manufacturers to begin offering four-stroke line trimmers that burn straight gas (no need to mix oil with it). Although four stroke engines have traditionally been too heavy for hand-held applications, new designs are light and nimble.

While all this has been happening, other manufacturers have developed two-stroke engines that meet the strictest emissions standards. At the moment, good line trimmers are made in both two- and four-stroke configurations. Your choice comes down to how comfortable you are investing in relatively new technology, and how you feel about keeping mixed gas on hand. 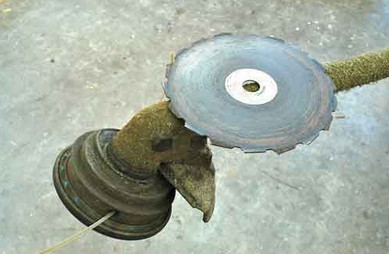 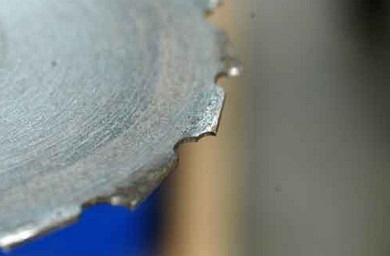 If you’ve got a larger-than-typical suburban property, if you live in the country or if you’ve got a cottage property, a brush cutter is probably best. Even though they’re a professional tool, they offer more power for cutting long grass and brush, and they spin larger diameters of aggressive trimming line that lasts longer than conventional line. Brush cutters can also be fitted with circular saw blades and they’re more comfortable to use because they hang from a harness and include handle bars. As you’d expect, brush cutters cost more than line trimmers. You’ll pay at least $450 for models that exceed the capacity of line trimmers. The best brush cutters cost about $1200. There’s no need to spend this much, though this top price does get you a very durable, professional-grade machine. The top-of-the-line brush cutter I bought in 1993 still performs like the day it was new, even after hundreds of hours of hard use.

Modern two- and four-stroke line trimmers and brush cutters work better, safer, more reliably and with less noise than ever. And it doesn’t hurt that all this comes in a greener package, too. 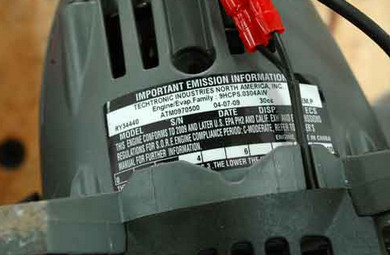 Beginning about a decade ago, federal legislation in Canada and the U.S. required lower engine emissions from outdoor power products, and this has led to innovations that directly affect the kind of simple, light weight, dirty-running two-stroke engines traditionally used to power trimmers and brush cutters. When this legislation first emerged, experts predicted the extinction of the two-stroke engine because polluting unburned gas and oil in the exhaust was believed to be inevitable. The naturally cleaner burning four-stroke seemed like the only choice, except that they were too heavy for hand-held outdoor power products. While it’s true that many very reliable two-stroke engine designs have been abandon because they ran too dirty, something unexpected happened. Some manufacturers figured out how to produce very clean burning two-stroke engines, while others created four-stokes light enough to be used in line trimmers. In both cases, sophisticated design made it happen.

Each manufacturer has its own trade secrets, and some firms have opted to deviate quite a bit from the simplicity of traditional two-strokes in order to make the grade environmentally. Some, but not all. Some of the simplest, cleanest burning two-stroke engines around use strategically angled auxiliary intake ports in the side of the cylinder walls. This imparts a swirling action to the gases that keeps almost all the fresh fuel within the cylinder while the exhaust exits from its own port on the other side. You can see the telltale signs of this effect by looking at the top of a piston after a swirl-ported motor has run for a while. Carbon deposits are concentrated on the exhaust side of the piston, while the intake side remains clean.

I’ve run modern two-stroke engines with clean-burning design features side-by-side with motors made in the mid-1990s and you can tell the difference with your eyes and nose. Even burning gas and oil mixed to a rich 20-to-1 ratio, today’s cleanest two-strokes run smokelessly.

Trees are especially vulnerable to being killed by line trimmers and brush cutters because all sap flows through a thin area just under the outer bark. No matter how large the tree, it’ll die if a continuous ring is cut all the way around the bark. Never let the plastic trimming line touch any tree while you’re trimming around it – especially small trees. It’s better to leave a few blades of grass around the trunk than to lose a tree that may have taken five, ten or twenty years to grow. The real danger is not that you’ll kill a tree immediately, but rather that repeated injury of the bark here and there will eventually add up to a fatal blow. 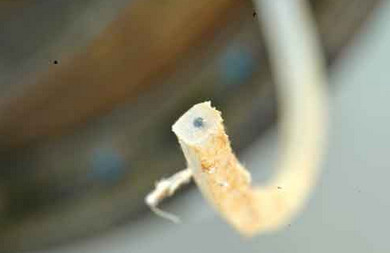 If you’ve got a brush cutter, consider buying metal-reinforced line for it. The best not only contain wire inside the plastic for longer life and less breakage, but the shape of the outer plastic shroud is different, too. Instead of a round cross section, the most aggressive trimmer line is square or hexagonal. The resulting sharp edges make for much better cutting.

If you’re not wearing safety equipment when trimming or brush cutting, the question isn’t if you’ll get hurt, but when. The danger is especially great when you’re working around driveways or paths that could have pebbles or gravel. Even a small line trimmer can launch these hard enough to blind you or anyone in a 50-foot radius. The most comfortable way to protect eyes, face and hearing is with a helmet/face shield/ear muff combination. Much more comfortable than separate safety glasses and ear muffs, this outfit also protects your face from flying debris. 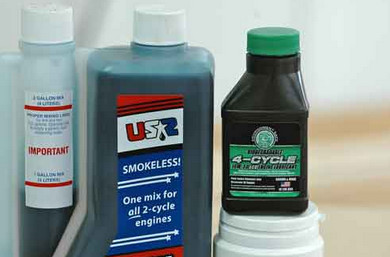 One reason why two-stroke motors run cleaner these days is because high performance oils can be mixed in such dilute quantities with gas. Where typical gas/oil ratios used to be 20 to 1, modern oils can be safely mixed at 50:1, even on small, air-cooled engines. Four-stroke crankcase oil is also being made from organically-grown, synthetically modified farm-grown crops these days.