I’m convinced that a grid-connected approach is the way to go as a mainstay water system, with an energy backup system to give you greater reliability. Might as well use the grid whenever it’s available to you. Here are four reasons why I like a grid-connected water system:

So what would a grid-connected/grid-independent, disaster-proof water system look like? Here’s one recipe that includes three elements working together for maximum reliability:

Conventional alternating current submersible pump, pressure tank and controls built according to the specs described in this course. Add the trickle system to this if your well can’t deliver enough water without help.

Generator powered by gasoline or large tank of propane. This provides short term backup power and water for days or weeks. For longer term protection you’ll need to add backup system #2 below. 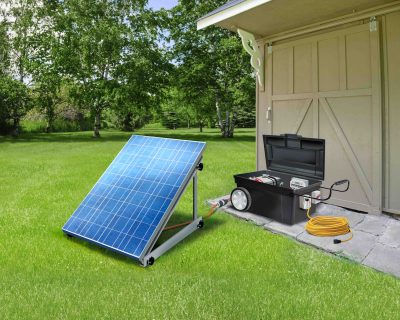 It’s conceivable that the electrical grid could go down and stay down for months or even years. In cases like these, even a gasoline or propane powered generator won’t keep you going forever because fuel supplies will dry up. To protect yourself from something like this, you’ll need a photovoltaic or wind-electric system charging a bank of batteries and an inverter to convert DC power to AC current that a conventional pump can use. Contact me through the course interface to learn more about the course I offer on building your own solar generator.

A multi-level, hybrid system like this may not earn you the same bragging rights as a completely off-grid approach, but real world preparation isn’t usually about making yourself look good. It’s about real-world effectiveness in turbulent times. And the rather boring fact is, conventional pumps and controls work really well and they’re very economical. Extending their usefulness with alternative electrical supply just makes sense.

Bigger is not always better when it comes to submersible pumps. That’s because a pump that’s too large will switch ON and OFF more often than it should. The less switching a pump does the better. A 1/2 horsepower submersible pump is more than enough for most households and small farms. Don’t go with a 3/4 HP pump unless you really have need for sustained water flow rates greater than 10 gallons per minute. Also, most submersible pumps are made to use 240 volts, but they’re also available in 120 volt versions. A 120 volt pump is better for disaster-proof water systems on two counts. First, you can run this pump with a very small generator if need be. Only generators larger than 3000 watts produce 240 volt power. Alternative power is the second reason a 120 volt pump makes more sense. It’s much less expensive to create a solar battery power system that produces 120 volt power than 240 volt power. If you ever do decide to run your 1/2 HP submersible pump with a generator, it’ll require nothing smaller than a 2000 watt unit to handle the startup surge current.