Depending on where you live, a completely electricity-free water system might make sense for you. You can either use this as your primary water system if you’re far from the grid, or as a supplement to a conventional grid-power system.

In 2014 an Amish couple moved to a farm near my rural island home – David and Miriam are their names – and their faith commits them to remain completely free from the grid. The farm they moved onto had an electrical connection to the house and barn which they removed after getting settled in, but their need for large amounts of running water remained. With lots of livestock to water, some kind of powered approach was necessary. David ended up installing something I’d never heard of before but it works quite well. He set up a 5 HP electric start Honda engine connected to the pump portion of an electrical jet pump. Instead of the pressure switch turning ON power to run an electric motor, it makes contacts that energize the electric start motor that fires up the gas engine. The pump is connected to a large pressure tank (about 100 gallons), so a lot of water can be drawn off before the pump needs to come on again.  Although a system like this isn’t ideal for long-term use during an extended power failure because of its dependence on gasoline, it is an interesting, powerful and very effective completely off-grid approach to pumping high pressure water in large quantities. 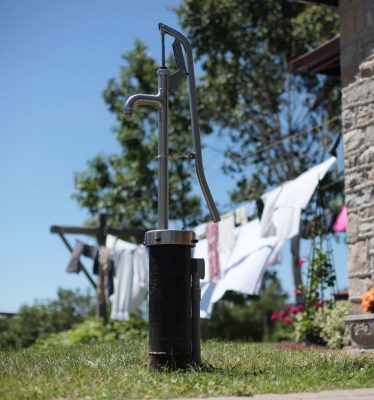 Once upon a time, farms everywhere relied on hand-operated pumps to bring water to livestock and people. These days a handful of companies have refined the old hand pump concept and brought it to a new level. The idea is the same, but the effectiveness and durability of these modern hand pumps is better than ever. My favorite right now is made by a US company called Bison. They make pumps for shallow wells (less than 22 feet vertical draw), and deep wells (more than 22 feet). Deep well situations are more complicated because the pumps have a pumping cylinder that sits below the surface in the well. A rod extending down to the pumping cylinder operates it, pushing water to the surface instead of pulling it up by suction. Bison also offers hand pumps that are operated by two people to deliver lots of water. All their pumps can also connect to the outside garden hose tap, filling the pressure tank in a conventional system in your home so water can flow from all taps and fixtures under pressure when the power goes down.

I’ve used a Bison pump at my place for a few years and it’s great. Watch the video up next to see how I installed it in the same well as my submersible electric pump.

Water pumping windmills are a mature technology that’s been used successfully for centuries. Solar pumps, by contrast, are a more recent technology that also pumps water without outside energy inputs. Which one makes sense for you? It comes down to water volume needed and the pressure required. Solar pumps use photovoltaics to pump relatively small amounts of water. They’re much simpler and less expensive than windmills, but they don’t make as much sense for large pumping volumes. Water pumping windmills are the best choice when you need to pump thousands of gallons of water each day., but at low pressure or no pressure at all. Solar pumps are ideal for daily pumping volumes in the hundreds of gallons per day, but with higher pressure that can be stored in a pressure tank.

Regardless of what brand of pump you use, protecting deep well hand pumps from freezing is pretty simple. Drill a 1/8-inch diameter hole in the intake pipe four or five feet below ground level before installing the system. This allows water to drain back below the frost level after a pumping session. The four of five pumps of the handle fills this section of pipe again, letting water flow no matter how cold it gets. 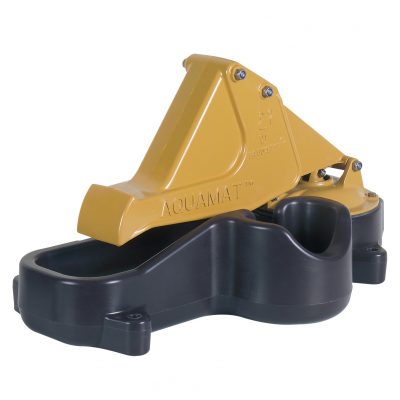 Would you like to water livestock without the need for electricity? This is where a nose pump can help.  I installed mine back in 1987, and we’ve watered a dozen head of cattle from it every year since then. The only repairs it required was a new set of bearings I installed in 2003. Aquamat is the leading maker of nose pumps. Their design includes a trough for water and a nose piece connected to a rubber diaphragm. In less than a day animals learn to push the nose piece back and forth to pump water into the trough. Our livestock have literally pumped more than half a million gallons of water so far with this one little pump. Not to be confused with traditional water bowls where animals trigger the flow of pressurize water, nose pumps allow the cattle to actually pump their own water with their own muscle power.

Water well systems are easy to take for granted, but vital for anyone who relies on one. And in my experience, when something is really important, you owe it to yourself and your family to know at least the basics of how to create and fix your water system. As with life in general, with the right kind of knowledge and the right hardware and materials, ordinary people can make great things happen.