Laying in a year’s worth of food is about more than just putting jars of apple sauce and freeze-dried chili on a shelf in the basement. To be successful you need to follow a plan. Without one you won’t get where you want to be as far as food storage goes, but there’s another problem. You also need to test your food storage system under simulated emergency conditions. The four-step process below is definitely something you should follow:

Step#2: Identify how much food you need

Watch the video coming up for a visual overview of the process and what you can expect with each one.

Before I go into more detail about the three-step process, I need to warn you about something. The internet is filled with lots of information on long term emergency food storage, but most of it is too general. Some is technically questionable, others are just plain wrong. Here are some key facts that are easy to miss:

Fact#1: It takes testing to estimate your true food needs. Under-estimation of food supplies is your main danger. In theory, an average man needs about 2500 calories per day, but that goes way up with increased physical activity. Also, some foods will spoil, some will get spilled or wasted, too. That’s why a year’s supply of food needs to account for losses and the added calories burned in a survival situation. Add at least 10% to what you think you need. More is prudent.  More on the valuable exercise of experiencing your food supply coming up in later lessons this week.

Fact#2: Not all dry foods are suitable for storage. Flour doesn’t last as long as whole grains. Powdered milk won’t last more than a year except under perfect conditions. Brown sugar is too moist to last reliably for 365 days in storage. The best sources of calories come from whole grains that you grind or cook immediately before eating. Rendered animal fats such as lard are the most stable forms of fats and a good choice for survival prep. These are just a few of the tips you’ll get later in this week’s lessons.

Fact#3: You may need to safeguard your food stores. There’s a naive and unspoken notion leads some people to believe they’ll be able to enjoy emergency food supplies while the rest of the world starves peacefully around them. In reality, a year’s worth of food for your family will turn into nothing more than a quick snack for a hungry mob when it invariably finds out what you have. Emergency supplies are only as good as your ability to keep them hidden and secure. Hungry people are usually angry people. 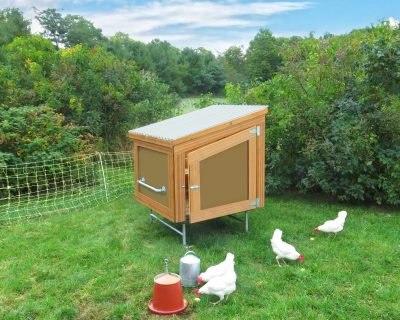 My wife and I were touring rural farms in Jamaica in June 1988 as part of our honeymoon, and by 10:30am we arrived at the farm where we’d spend the lunch hour and afternoon. There was a campfire burning in front of the farm house, a couple of teenage girls standing in front of an iron kettle of boiling water, and chickens running around. We toured the coffee and vegetable crops for a couple of hours, then came back for a lunch of curried rice and chicken. It was delicious and prepared entirely by these two teenage girls – right from live chicken to steaming lunch. These young ladies hadn’t been spoiled by a convenience lifestyle, so they’d developed competencies that have almost completely disappeared from the “developed” world. As convenient as our push-button food lifestyle is, it’s also left us highly dependent and vulnerable as a society. It can be different for you, but only if you decide to be different.

Fact#4: Disruption changes everything. Imagine for a moment that you’ve carefully laid in a year’s worth of food. You’ve got an alternative energy system in place and you’re equipped to hunker down in a well protected space. So what happens to all this preparation when armed soldiers knock at your door and order you to leave as part of a mass evacuation? Some scenarios won’t involve this, but some will. That’s why it makes sense to build your year’s worth of food in a non-urban area if possible. This isn’t an option for everyone, but it’s worth considering.

Fact#5: Food security is about food production not just storage. Any situation where you rely on your year’s worth of food may be far enough away from people that you’ll have some opportunity to grow, hunt, catch or find some kind of food in addition to what you’ve stored. Don’t assume any food production in your storage plan numbers, but don’t forget to prepare yourself with seeds, ammunition, fishing gear, traps or whatever else makes sense for eating from the wild or a garden. Thinking ahead pays off.

Fact#6: Energy will be scarce. Any scenario that shuts down food supplies for a year will be massively disruptive on all levels. No one will be able to run an electric wheat mill or cook up a pot of bean porridge on grid power. Whatever knocked out the movement of food and the operation of commerce will almost certainly have cut power, too. To be of any use, your year’s worth of food needs to exist in the context of an entire survival strategy, including storage, preparation, and cooking that does not rely on central energy resources.

Listen to the audio message up next for the truth about survival food preparations and why such a small portion of the population takes it seriously.

As I mentioned before, there are a number of main steps for building an emergency food supply. Now’s the time I’ll explain them in more detail.

Before you lay in any food, you need a survival food vision. And the first thing to figure out is how “survival” you want to get. It all comes down to food choices, and this isn’t necessarily clear cut for most beginners. Think of your strategy like choosing a point on a number line. You can select a basic choice based on ultimate simplicity or you can go for a very lavish survival diet. You can also go for  something in between. It all comes down to cost, how picky you are about what you eat, how much trouble you want to go to keeping your food supply fresh, and the kind of preservation methods and technologies you want to employ.

Whether or not you agree with Mormons on spiritual matters, they do take food preparedness seriously. In fact, they have done more to perfect and promote household storage of survival foods than any other single group. Mormon leaders strongly encourage their members to lay in a year’s worth of food, a water supply and money as part of prudent living. So what does the Mormon food strategy plan look like? It’s divided into three parts. Short-term food supplies provide nourishment for 3 or 4 days in a form you can carry if you need to leave your home. This recommendation is the same thing many nations are encouraged to do by government. Mormons also advocate medium-term food supplies to keep families fed in a more-or-less normal way for at least a few weeks at a minimum, and up to 3 months if need be. Long-term food supplies are another layer in the Mormon recommendations. These include food supplies for a year of basic nourishment. Click here to download your copy.

At the simple end of the spectrum, there’s not much required to keep a person from starving to death: a supply of grain, some beans, some salt, a little fat and at least a tiny amount of vitamin C to ward off scurvy (a cup of evergreen tea every week provides more than enough). This diet isn’t much fun after a few weeks, but you will stay alive as long as it holds out. On the more complex end of the options, there’s no limit to how fancy you can go with an emergency food supply. You could have a root cellar stocked with fresh vegetables and an independent refrigeration and freezer system, delivering an eating experience that’s not a whole lot different than today’s home cooking. As usual with these things, it’s a trade-off between cost and benefit. You’ll be able to make a more informed decision about your food storage strategy after you’ve taken in this whole course, including the real-life survival food trial I’ll tell you about.

Back in the 1980s I was at college, and I had a quirky geography teacher named Professor Heidenreich. His specialty was historical geography, and he took his research extremely seriously. After reading so many accounts of early explorers suffering from scurvy, Professor Heidenreich decided to experience scurvy for himself. Scurvy is a medical condition that was common in the old days of sailing ships. Bleeding gums, deteriorating joints and other health problems leading to death were the symptoms.

Professor Heidenreich explained to us students how he intentionally cut out all vitamin C from his diet. Apparently it wasn’t easy to do either, since only the tiniest amount of vitamin C prevents the disease. It took six months of diligent effort for the first signs of scurvy to set in – bleeding gums, scaly skin, dry hair that breaks off near the scalp. The professor didn’t let this go on very long, and even a few days after allowing vitamin C back into his diet the symptoms began to disappear. The moral of the story for food survival is that a little bit of vitamin C goes a long way. While there may be real benefits from taking massive doses of vitamin C, a little goes a long way when it comes to the dreaded disease of sailors from yesteryear.