“It wasn’t raining when Noah built the ark.” 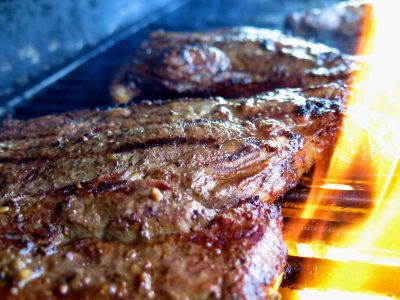 This grass-fed T-bone steak came from cattle on our pasture. It tastes as good as it looks.

If you take a look at commercial meat production these days you’ll notice that it’s intensive. Food is produced for livestock using a lot of machinery, a lot of energy, and a lot of equipment. Livestock is usually housed in big and expensive facilities. Animals are shipped long distances for processing, with the resulting meat shipped even more afterwards. All this happens because it makes economic sense given the abundant energy we have for production and transportation. And like it or not, modern farming methods are the reason why we enjoy more abundant food at lower prices than ever before. Abundant at the moment, anyway.

Our current system of food production offers no hope of keeping ourselves fed after a societal collapse. In fact, today’s specialized, energy-intensive meat production and distribution probably won’t be possible at all if fundamental financial, energy and transportation systems break down.  The good news is that you can still enjoy a great steak after the world goes dark and cold. If you’ve got a bit of land, and you set yourself up ahead of time with a few things, you can create what I call a semi-automatic, forage-based livestock system.

There are many ways to raise your own meat, and I’ll show you one way that I know works because I use them. You’ll need a few acres of pasture contained within a good electric fence; a supply of basic hay; plus some kind of  water source. The production of meat more or less takes care of itself with this system – at least during the grazing season, anyway. You’ll get tender, grass-fed meat with very little work, plus a supply of nutrients for the gardening side of your survival system. 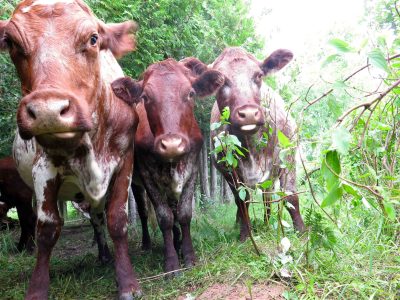 Shorthorn cattle on pasture on Manitoulin Island, Canada. Making full use of the grazing season is a key part of survival beef production.

Of all the livestock animals out there, cattle are my favourite.  I know it’s true that smaller animals like sheep, goats, pigs and chickens have a higher conversion efficiency of feed-to-meat than cattle (at least on paper, anyway) but cattle offer big advantages that don’t show up in such a simplistic analysis.

Cattle are physically tougher than other domestic meat animals. Situations that will easily kill sheep and pigs won’t bother cattle at all. Beef cattle are also more than capable of defending themselves against most predators, too. What’s the point in the efficiency of raising, say, rabbits or sheep, if predators get the meal? Where I live we hear wolves howling several nights each week. Sighting a bear is no big deal. It happens all the time. Some people even spot cougars occasionally. Despite the obvious predator pressures, we’ve only ever lost one newborn calf to predators since we began grazing cattle in 1987. By contrast I know sheep and goat producers who have lost their entire flocks by wolves who have left nothing but dead and dying livestock behind.

Cattle are also the big guns of the livestock world. They have the most powerful digestive systems going, turning the roughest of pastures into high quality meat and milk. There’s no other domestic animal that can turn rough pasture into great food like cattle. Good beef also tastes way better than mutton or goat or any of the other meats people raise in their backyards.

Raising your own beef the simple way involves four steps:

Step#1: Acquire Get a Calf in Spring 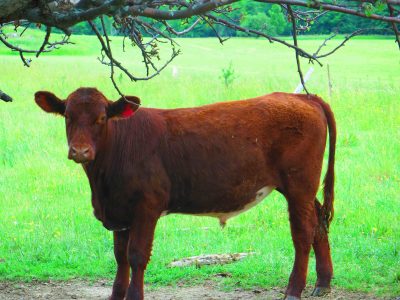 This is a good size of calf to put on pasture as part of your survival beef production plan.

Weaned means an animal that no longer drinks milk from its mother, but eats grass and hay just like the big boys.  Unless you want the complication of getting into the breeding business, the easiest way to get a weaned calf is from a neighbouring farmer.  Choose a heifer (that’s farm talk for a young female) or a steer (a male that’s been castrated). Don’t try and raise a bull calf for meat. He’ll grow harder to handle as he ages, and the meat won’t be as good. Bartering for a calf is exactly the kind of transaction that’s easy to do when the money system breaks down.

Step#2: Put Your Calf on Pasture 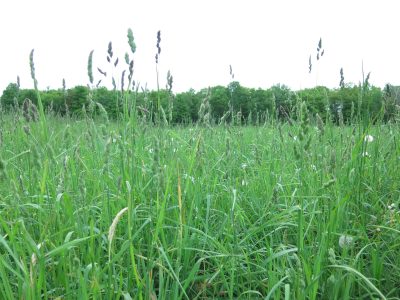 This might look like ordinary grass, but it’s actually a productive pasture field. It’s growth like this that cattle turn into excellent meat, milk and other products.

Pasture is one place where easy gains are made. You don’t need to harvest any feed because your animal does it automatically for you. How much pasture area do you need for a 500 lbs beef calf? That depends. A 1 or 2 acre patch of good grass might be more than enough for a single young beef animal for the whole season. That said, you might need two or three times that if your land isn’t productive or drought sets in. The best way to learn what works on your land is to give it a try. If the pasture gets eaten down to nothing before the grazing season is over, you need more land. Feed hay earlier than you normally would (see step#3 coming up), then adjust your grazing system accordingly for next year. Where I live we start grazing in late May and smart farmers usually stop no later than October. Grazing longer than this hurts the pasture by trampling it up too much in cold, wet weather. Plus, there’s not a lot of growth to make cattle gain at that time of the year anyway. During a 5 month grazing season your calf will probably gain 300 lbs. That’s pretty good, but your animal has more growth left. And the more of this easy growth you capture before slaughter, the better your yield of meat will be.

We’ve pastured beef cattle at my place since 1987. The video below shows a glimpse of the rotational grazing system we use. Anywhere from 45 to 70 head get to graze a two or three acre patch for a couple of days, before we move them to fresh grass. The grass is only being grazed two or three days each month. The rest of the time it’s growing. See for yourself. The situation you’ll see is larger than what you’d do for survival beef, but exactly the same approach.

Every pasture needs to provide access to fresh water and salt for the animals grazing on it. The two videos coming up give a quick tour of the water system we use, plus a simple way we use salt to get cattle to help us broadcast legume seeds to improve the species makeup of our pasture without tilling or using any equipment. 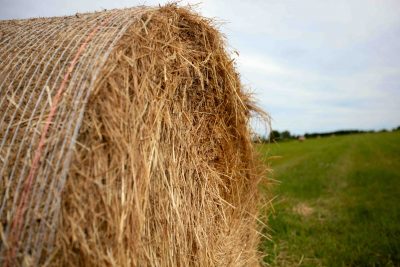 This is the kind of round bale that makes sense for feeding cattle beyond the time when pasture can do the job. Small square bales are easier to handle without equipment if you can find bales like these.

You could slaughter your beef coming off pasture in the fall at 800 lbs. We’ve done this here at our place, so I know it works. You’ll get nice tender beef (because the animal is so young), but it will be quite lean. I prefer more fat. Continuing to feed your beef into the fall and winter means more easy gains to be made from an animal that still has growth potential. Feeding hay is easy, and laying in a supply of hay to keep feeding your animal over winter is a cheap way to get more beef. Hay fed through cattle also turns into manure which is a great top dressing for your permanent mulch gardening system.

So, how much hay will you need? About 15 lbs to 20 lbs of dry hay per day for an 800 lbs animal as it comes off pasture is a good rule of thumb. You might need to feed as much as 25 lbs per day by the time that animal gets to be over 1000 lbs. when it’s more than a year old.  Feeding an average of 25 lbs of hay per day for, say, 150 days adds up to 3750 lbs. of hay. You’ll need roughly five round bales for this. Where I live this much good hay costs about $200. Besides the meat gains, that $200 (or barter equivalent) delivers more than a ton of manure for the vegetable side of your survival food system. When the money system stops working, hay is one of those basic commodities that you’ll be able to barter for as long as you have something of value. 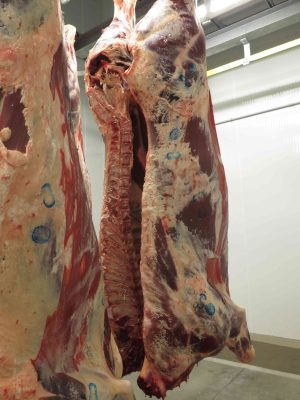 These hanging sides of beef are ready to be cut up and stored. One beef animal makes a lot of high quality food.

This is a topic in itself, but here are a few tips. Most jurisdictions now have rules against home slaughtering of animals. But if the food system breaks down, all that remains will be your own good sense, your own animals and your own skills. There simply won’t be any government inspected facilities to ship your animal to for processing. Bureaucrats will be long gone.

All cattle either have horns or bumps where horns would be if they grew. Draw an imaginary line between one horn location and the diagonally opposite eye. Draw another imaginary line from the other horn location to the second eye. Where these lines cross on the head is where to shoot cattle for slaughtering. Even a .22 LR shot (quite weak as firearms go) at close range aimed at precisely this point will drop a full-size beef instantly. There is no suffering.

The moment your animal drops, you need to slice the main arteries in the underside of the neck using a sharp knife. This isn’t pretty but it’s the reality of meat production. You want as much blood as possible to leave the animal while the blood is still liquid and drainable. There will be gallons. Brace yourself.

Next, you need to hoist the animal up by its hind legs so the whole carcass can be raised off the ground. A loader tractor is perfect for this because you can raise or lower the loader depending on where you’re working on the animal. I’ve butchered beef on ropes tied to branches of a tree and raised with ropes and pulleys. It works, but a loader is easier.

Remove the hide from the animal, remove all internal organs without puncturing anything, then split the carcass in two by sawing along the backbone. Cut the sides in half again so they can be handled, then cut the meat into steaks, roasts, stew and ground. Butchering beef this way by hand is a ton of work, but it’s also a collapse-proof survival food skill. An excellent book on home butchering is The Complete Book of Butchering, Smoking, Curing and Sausage Making by Philip Hasheider.

By the time you finish the lessons in this section, you will:

1. Understand real-world strategies that let you grow a survival garden when the going gets tough.

2. Know which kind of seeds to save for future gardening.

5. Know how to raise grass-fed beef the simple way.