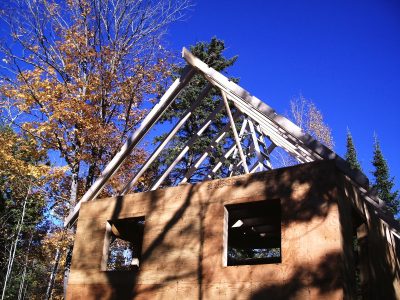 Here’s a detailed look at the process for raising the rafters and ridge board. Lay some temporary boards on the loft beams and open area of the cabin to walk on, then follow these steps:

1. Raise the first pair of rafters over one end wall of the cabin, with no ridge board between them at the top. Secure the bottom ends of the rafters with one 8”-long spike in each, driven an inch or so in to the top of the wall. You’ll drive these spikes all the way in later, but for now leave them long in case you need to remove and reposition the rafters later.

2. Raise and temporarily secure the second pair of rafters in the same way, somewhere in the middle of the cabin, in the place where the end of the ridge board lands.

4. Slide one rafter out of the way and off its mark sideways on the ridge board, then drive three 3 1/2” screws through the ridge board and into the end of the rafter to secure it.

5. Slide the other rafter of the back over its mark again, then secure it with three more 3 1/2” screws, driven at an angle through the ridge board and into the end.

6. Repeat the process for the other ridge board. Its inner end is held up by the same pair of inner rafters, and its outer end is supported by another pair of rafters over the other end wall of the cabin.

7. Install a 2×4 brace angled down from the ridge board to one of the loft beams, using 3 1/2” screws at both ends. This makes these initial rafters strong while the rest of the roof structure is going up.

8. Fill in the spaces along the wall with more rafter pairs, installed on their marks and meeting at the ridge board. As you work, keep your eye on the rafters and make sure they’re going up straight and parallel with each other. If there’s a mistake in the marks you made on your ridge board or the walls, misaligned rafters is how it will show up.

9. Finish up by adding the 2×4 eaves braces, then the four rafters the form the front and back eaves.

Before you cover the rafters with lumber to form the completed roof, it’s time to trim the bottom ends of the rafters so they’re angled correctly and all in a perfectly straight alignment. You could have trimmed the bottom ends of the rafters before installation, but chances are slim that the ends would line up perfectly. Instead, use a chalk line to make a mark on the top of the rafters that’s 21” down from the point at which the wall sits. Use a level to mark vertical lines down from these marks, cut the rafters at these points with a hand-held saw, then mark horizontal lines for cutting off the rafters so there’s a 4”-wide horizontal surface. A cordless handsaw lets you complete most of these cuts efficiently, but you’ll need a good handsaw to get into close quarters to make some of the cuts. The installation of blocking between rafters comes next, so be sure to watch the video to get a sense of how this needs to happen.

Covering the roof with boards is the next major step, but there are three smaller tasks that need to be completed before you tackle this job. The first involves installing short lengths of 2×6 are cut to fit between each rafter. This is important because it fills the space between the top of the cabin walls and the underside of the roof boards. One edge of these filler boards need to be cut to a 45º to match the underside of the roof, while the bottom edges remain square as they rest on top of the wall. Custom-cut each filler to fit between individual rafter spaces. Use a level or straight edge to ensure they’re installed plumb. Each filler block is essentially an extension of the outside surface of the walls. There’s no way this blocking can go in conveniently after the roof boards are on, so install it now. After this comes gable wall construction and installation, as you’ll see in the next video.

The gable walls are the second thing you need to check off your list before roof sheathing goes on. Gables are the triangular wall sections built underneath a roof, and though you could build gable walls horizontally before tipping them up, it’s much easier to build them piece by piece in the case of this cabin.

Start by cutting and installing a horizontal bottom plate along the top of the wall. Then cut two angled top plates fastened to the underside of the rafters that align with the outside faces of the building. You’ll need to do this along both the front and back walls. All ends of these plates also need to be cut on 45º angles to fit into the bottom corners of the roof and alongside the ridge board. Screws work best for securing these 2×6 plates.

1. Square on the bottom ends.

3. Correct length to fit vertically between the top and bottom plates at each particular location.

Here’s a trick for making this happen. Start by cutting and installing a short section of bottom plate that goes on top of the first bottom plate. This is called the filler plate and it’s sized to fill the space between the bottom corner of the gable wall and the first stud. Next, cut your first stud a few inches longer than needed to fit in its location, then hold the stud upright and vertical with a level to guide you. Trace the bottom edge of the angled top plate onto the top of this gable stud to determine the ideal length it should be, take the stud down, then cut it at the marked angle on a chopsaw. Check that the stud fits properly in its place, then secure it with screws driven into the end of the short section of bottom plate you added and the angled top plate. Repeat the process of adding a filler plate, custom-cutting a stud with an angled top end, then securing that stud. With your gable wall frames complete, apply sheathing to the outside. It’s time for loft floor board installation now, with details shown in the next video.