It’s a rare basement that doesn’t have some kind of beam or HVAC ducts extending below the bottom of the joists, and these ducts and beams need to have a frame built around them so they can be hidden when the finished ceiling goes up. You can’t get rid of ducts and beams, so you need to live with them. The usual approach for this kind of framing is called “boxing” because it involves building some kind of box-like frame structure around the ducts or beams. The illustration here shows how 2x4s are joined into “ladders” to create the sides of the box. The idea is to minimize the loss of head room underneath the ducts and beams, but before you go further you need to look at your current duct layout.  Watch the video up next for a tutorial on how heating ducts and beams can be covered while also taking minimal head room.

VIDEO: How to Box in Ducts & Beams 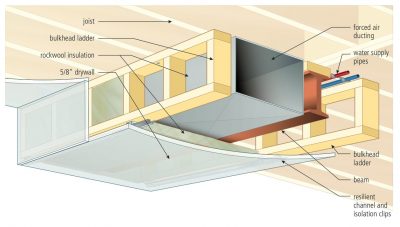 It’s not unusual for HVAC ducting in basements to be installed in less than ideal locations. It’s far better, for example, to have a heating duct extend down below normal ceiling height along the edge of a wall, or next to a beam that’s already in place, rather than in the middle of a room. Then there’s also the issue of cold air return ducts in houses built in heating climates. Every finished basement room should have an extension of duct work that draws cool air back to the furnace for heating (and back to the central air conditioning system if your house has one). Without cold air return ducts ending at floor level, you’ll have stale pockets of air and basement rooms that never get heated or cooled properly. Most unfinished basements have cold air return ducts and louvres at the ceiling, but that’s not good enough for a finished space. Don’t make the common mistake of leaving cold air returns up high. You need to bring them down to floor level to encourage complete air circulation.  So at this stage you’ve got some questions to ask yourself and decisions to make: