As with walls, the stakes are high as you choose a flooring approach for your finished basement. The  issue mostly comes down to the installation of a proper subfloor, and the danger isn’t just about mishandling the moisture challenge. Subfloors are also about comfort. A basement that makes your feet cold all winter isn’t a good thing. And while it’s entirely possible to install a warm, comfortable finished basement floor that doesn’t encourage mold growth, you need to get intentional about making it happen. The challenges are greater than with above-ground floors because of that old moisture danger again. After all, basements are essentially just fancy holes in the ground.

Why Basement Subfloors Are Necessary

In the interests of making basement floors warmer and more comfortable under foot, it’s not unusual to install carpet and underlay directly on concrete without the use of a subfloor. This seems like a good idea, except for the hidden danger of condensation within the carpet itself. And the warmer and more humid it is in the summer where you live, the more of a threat carpet condensation becomes. I’ve explained all this earlier in the course, but even with a proper subfloor in place, wall-to-wall carpeting is not the best option for basements. That’s because it’s so absorbent and it’s fastened down. If a basement leak ever does happen (and it can in any basement), the presence of carpeting makes it much harder to dry out the space before mold sets in.  More on good finished floor choices coming up.

Subfloor tiles started to become popular in the late 1990s and they make it much easier to create moisture-resistant, comfortable finished floors in basements. I strongly recommend subfloor tiles. The most commonly available tiles are typically made of 24” x 24” pieces of wooden oriented strand board (OSB) with tongue and groove edges that lets one tile interlock with its neighbours. The underside of each tile is a layer of strong plastic with little legs extending down underneath. This design does several good things. First, the plastic keeps the OSB separate from any moisture that might come up through the concrete floor. It also prevents warm, humid air in the basement from condensing against the concrete. In this way it acts as a two-way vapour barrier. And second, the little legs raise the subfloor tiles about 3/8” above the concrete, creating a small space where tiny water leaks can happen without causing trouble. I know of several finished basements that were spared water damage from small leaks because the water flowed harmlessly under raised subfloor tiles and found its way to a floor drain. The OSB plus the air space make for significant insulation underfoot, too.

Click here for an audio tutorial about choosing a basement subfloor

For years the two most prominent subfloor tile manufacturers were Subflor and DRIcore. Both products were always of equal quality as far as I could tell after using them both. The Subflor brand name disappeared after the company was acquired.  Currently, OSB-type subfloor tiles come in two versions. The kind with the raised plastic layer is the most common, but there’s also a version with extruded polystyrene foam instead of the plastic. This provides more insulation value, but less ability to drain away leaked water.

A less common version of basement subflooring is entirely wood-free, and the idea makes good sense. Instead of a raised plastic layer underneath OSB, the raised part of the profile and the body of the subfloor tiles are both made of the same synthetic material. You get the advantages of an air space above the concrete, plus no organic matter on top. Tyroc and DryBarrier are two that I know of. Local availability and cost are the main factors in deciding what type of subfloor tiles makes sense. Listen to the audio lesson up next for advice on how to choose a subfloor tile product. With all the options out there, and more appearing all the time, it can be confusing.

If you want to have more insulation in your basement floor, there’s an alternative to the subfloor tile approach. Why would you want more insulation? One reason is infloor heating. Rigid foam makes a great basement floor insulation. The right kinds are even dense enough to support a plywood subfloor without any supporting wooden strips underneath. You simply lay sheets of foam on the basement floor, then fasten 5/8” plywood on top with concrete screws driven into predrilled holes in the floor. The screws hold down the plywood and the plywood holds down the foam. You’ll get excellent insulation levels this way – about R10 if you’re using 2”-thick foam. But as with anything, there are drawbacks. First, you’ll lose a couple of inches of ceiling height more than if you used standard subfloor tiles. More of an issue than this is the risk of water leaks. Most subfloor tiles have that air space underneath them, and this allows small water leaks to remain harmless. The space allows room for the water and it eventually drains away or soaks into the concrete floor. The foam-on-concrete approach offers no such grace, though grace isn’t always needed in such matters. If you’re sure your basement is perfectly dry all the time, and you want maximum floor insulation, then some kind of foam-based option makes sense.

Perhaps the best floor insulation system of all for use under electric infloor heating that will be covered in ceramic or porcelain tiles is made by a company called Schluter. The illustration and video up next explains how the system works and how to install it in a basement. You’ll be surprised how integrated the various parts of this system are. I know from experience that it works really well and is quite reliable. Rigid foam gets bonded to your concrete floor with thinset mortar, followed by the orange plastic layer you see in the illustration. This is called an uncoupling embrace. Electric heating cables snap into the raised cylinders of the uncoupling membrane, then more thinset mortar followed by your tiles. Since the heating cables sit immediately below the tiles, these deliver noticeable heat and they do it quickly, with little lag time. 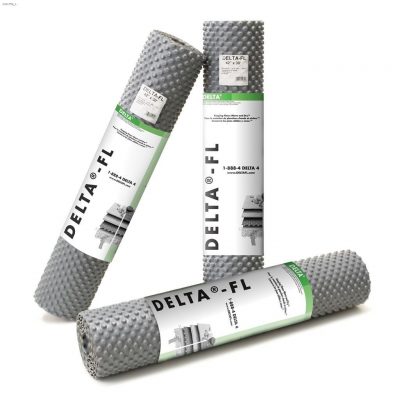 The real genius of modern basement subfloor systems isn’t the OSB that many subfloor tiles are made from, but the dimpled plastic layer that separates and raises these tiles from the concrete floor. And as it turns out, you don’t need to buy subfloor tiles to get this dimpled layer. A German company called Cosella-Dorken invented a product called DELTA-FL and it’s an excellent option for the lowest parts of a basement subfloor. DELTA-FL comes in rolls that you can unfurl on any concrete floor and it does two valuable things. First, it’s got dimples that create a raised space above the concrete. I know more than a few supposedly “dry” basements that had a small water leak that went no farther than the space created by a dimpled subfloor layer and caused no damage at all. And second, since the DELTA-FL is continuous, it creates a powerful and effective barrier against water vapour coming up through the concrete floor.

There are other companies that make similar products, but I know that DELTA-FL works exceptionally well. Seams can be sealed with a proprietary tape so they’re impervious. So when should you use a dimpled sheet underlay as opposed to subfloor tiles with a dimpled layer on the bottom? Start by comparing the cost of sheet underlay versus subfloor tiles where you live. Dimpled underlay should be somewhat cheaper than subfloor tiles, and laminate and vinyl plank flooring can be installed directly on top of the underlay. No wood required. If you insist on installing carpet, it probably makes more sense to go with subfloor tiles rather than wrestling full sheets of plywood or OSB down into the basement and onto the underlay. Carpet can’t be installed directly over DELTA-FL. It needs the support of some kind of sheet material underneath.